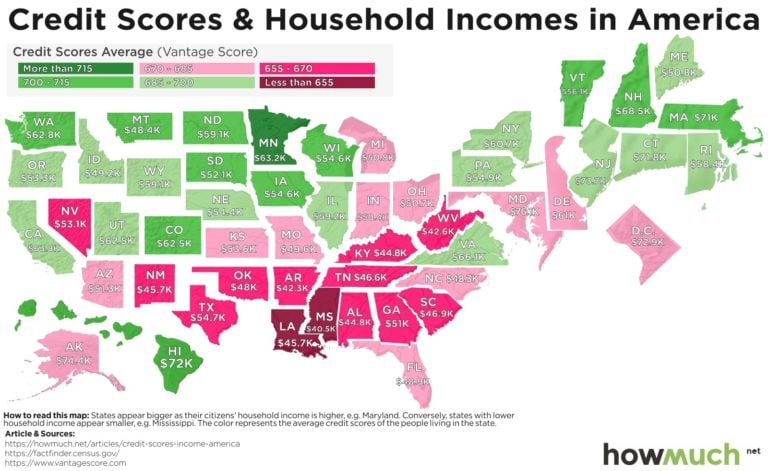 A good credit score is essential for every major financial decision. Buying a house, getting a car loan, and even getting hired all depend on maintaining a score. And perhaps the most obvious predictor of credit worthiness is whether the applicant has a high income with a steady track record of employment. With so much riding on a single number, we decided to compare average credit scores across the country and weight the results by median income levels.

We gathered our data from two different places. We used average credit score numbers from the VantageScore system. We color-coded each state according to the average credit score of people living there: states with high numbers were colored shades of green, and states with low scores became red and pink. We also took median household income numbers from the U.S. Census Bureau, allowing us to adjust the size of each state. Analyzing credit scores and income data in this way allows us to see a couple interesting trends in the economy.

Three large groups of similar states are immediately obvious on the map. There’s a group of green states stretching from the Northwest across the Northern Great Plains, all the way to the Great Lakes. All of these states have similar credit scores over 685 and decent-sized incomes, with Minnesotans in the lead with a score of 722 and a median income of $63,217. There’s another pocket of rich states in the Northeast, the richest being Massachusetts at 706 and $70,954. And finally, there’s a large group of states across the Deep South where people on average have very bad credit scores. Mississippians post the worst scores in the country (648) and make comparatively less on average ($40,528). In other words, our map quickly demonstrates which parts of the country are enjoying an economic expansion, and which places are struggling.

The more income people have, the better their credit scores are. This makes intuitive sense because a good income consistently pays the bills. Looking at our map, the Deep South is obviously the poorest region in the country, and the states there have the lowest credit scores. The same trend stretches across some of the old Rust Belt states, particularly Michigan ($50,803), Ohio ($50,674) and Indiana ($50,433). States right next door probably have similar living expenses, but people have median incomes of about $4,000 more. That makes it much easier to make ends meet.

A few exceptions prove the rule. Alaskans enjoy some of the highest incomes in the country thanks to oil ($74,444) and the average score is 675, but the state is completely different from the rest of the country. Nevada (think: Las Vegas) which has a median income of $53,094 but an average score of just 657. Remember, the house always wins!

Here’s a list off the top ten states according to the average credit score of the people living there, together with the median household income.

It’s no surprise that higher incomes are correlated with better credit scores. But it’s worth pointing out that the two aren’t perfectly aligned. People in Washington D.C. enjoy a median income of almost $73,000, but their credit scores are worse than Iowans, who make less than $55,000. That’s because there are a lot of other reasons behind credit worthiness, namely, the individual decisions people make every day with their money. Still, the extra few thousand dollars doesn’t hurt either.