ValueWalk
Home Info-Graphs Map: All Of The World’s Borders By Age 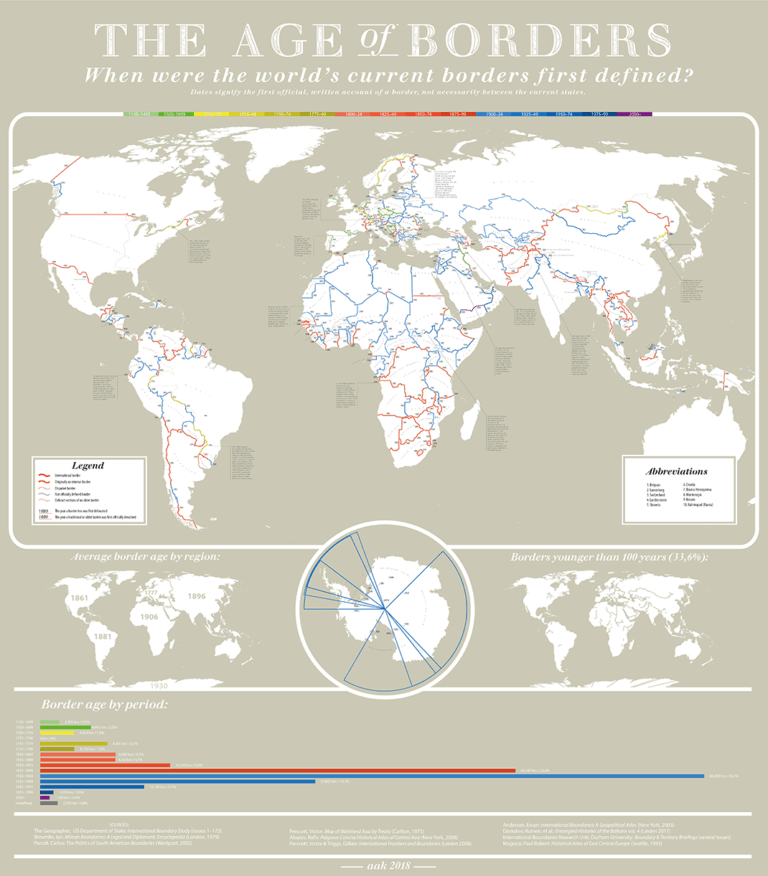 Defined borders are a relatively new concept in many parts of the world. In fact, until the latter half of the 20th century, most of the world was still wide open territory with loosely or completely undefined borders.

On the European continent, however, jurisdiction over territory has been a fact of life for thousands of years. In some cases, they’ve left a paper trail. In other cases, there are more concrete remnants. For example, over 3,000 miles (5,000 km) of simple frontier fortifications – known as limes – marked the edges of the Roman Empire at its greatest extent in the 2nd century.

Over time, as territorial jurisdiction changed hands through war, marriage, and other arrangements, the map has been redrawn countless times. The video below demonstrates just how dramatically many of Europe’s dividing lines have shifted (even as recently as the 1990s).

Even today, borders are far from set in stone. Belgium and the Netherlands recently swapped land in order to simplify an overly complex piece of their border along a river. Also, India and Bangladesh worked together to solve a notoriously complicated situation involving enclaves within enclaves.

Creating a map that shows the age of all the world’s borders seems like an impossible feat, but Reddit user, PisseGuri82, was up to the challenge. PisseGuri82, acknowledging the extreme complexity of the undertaking, outlined some caveats to consider:

These issues aside, the final product is a fascinating look at how we’ve divided the world up into nations. Here are some highlights from the map:

In contrast to the patchwork of territories left in the wake of the Holy Roman Empire, the southwest part of Europe has remained remarkably static. The border dividing Spain and Andorra, weaving its way through the rocky Pyrenees mountain range, has remained unchanged since 1278, when a feudal charter solidified Andorra’s geography. The Portugal–Spain border has been in place since 1297.

Many of the oldest borders in the world were established by treaties following a war. One particularly noteworthy example is the border between Iraq and Turkey, which was established by the Treaty of Zuhab (1639) following the sack of Baghdad by the Ottoman Empire.

The Legacy of the “Scramble for Africa”

It’s remarkable to note that a full third of the world’s borders are less than 100 years old. This is especially apparent in Africa, where many existing borders still resemble those haphazardly set by colonial powers around the turn of the 20th century. The average border on the continent is only 111 years old.

In 1964, independent African states chose to maintain colonial borders, primarily to prevent widespread conflict over territory. Though colonial divisions were maintained in theory, only about one third of Africa’s 51,000 miles (83,000 km) of land borders are demarcated – an issue that continues to cause headaches today. For example, South Sudan has numerous border conflicts with neighbors; a situation that is complicated by the presence of natural resources.

A recent study pointed out that the likelihood of conflict in Africa is approximately 40% higher in areas where “partitioned ethnicities reside, as compared to homelands of ethnicities that have not been separated by national borders”.

There are seven sovereign states with pie-slice-shaped territorial claims in Antarctica. It’s worth noting that the claims have been recognized only between the countries making claims. There is currently a treaty in place that preserves freedom of scientific investigation and bans military activity on the continent.

Saudi Arabia’s Lines in the Sand

Saudi Arabia’s oldest border section – shared with Kuwait – is a remnant of the Uqair Convention circa 1922, but most of its international borders were established in the latter part of the 20th century. The Yemen–Saudi border was only officially demarcated in the year 2000, and a 1,100 miles (1,800 km) border fence soon followed.

Where will lines Shift next?

Where there is a war and upheaval, border changes often follow. Syria’s descent into chaos and the annexation of Crimea are two situations which could result in new international borders. Breakaway states – an independent Catalan state, for example – are always a possibility as well.

For now, the most likely changes to borders will continue be minor adjustments to fix lawless gaps between nations. These corrections are rarely easy to negotiate, but irregularities, like the one that led to founding of Liberland, can cause even bigger headaches for governments and local officials.