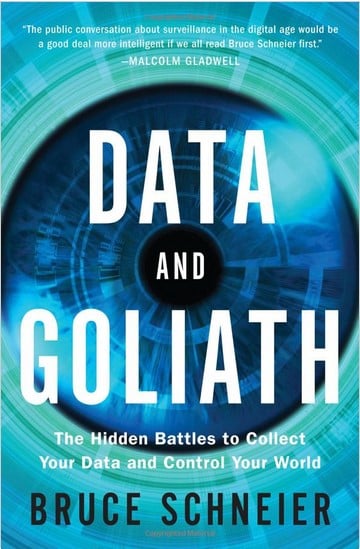 The following is a summary of our recent FS Insider podcast, Data and Goliath: The Hidden Battles to Capture Your Data and Control Your World, which can be accessed on our site here or on iTunes here.

Quietly, we’ve seen the American public effectively give in to ubiquitous surveillance — not in the form of governments spying on individuals, but rather corporations collecting vast quantities of data that reveal almost everything about what we think, how we behave, and how we can be influenced.

(Side note: Vienna Teng wrote a really interesting and quite haunting song on this subject titled The Hymn of Acxiom that's become something of a sensation. Give it a listen!)

Recently, on FS Insider, we reaired our interview with Bruce Schneier, Chief Technology Officer of IBM Resilient, internationally renowned security technologist, and author of Data and Goliath: The Hidden Battles to Collect Your Data and Control Your World, on why public-private total information awareness is a problem for society. Here's what he had to say...

The Spy You Keep in Your Pocket

The first thing we have to realize is that the most convenient device probably ever created — the cellphone — is almost the most sophisticated surveillance device in existence.

Cellphones can also reveal who we’re with, where we sleep, what we’re doing online and through social media, and much more about our behaviors and habits.

Our cellphones and search engine usage reveals more about who we are than our spouses may know about us, or even more than what we think we know or remember about ourselves, Schneier noted. And that information is effectively persistent — possibly permanent — he added.

Increasingly, we’re learning that governments around the world use this surveillance data for their own purposes.

“These are incredibly intimate surveillance devices that if the government demanded we carry them, we would openly rebel, Schneier said. “But because they are not mandated, because the surveillance is incidental to providing the service, we acquiesce to them surprisingly willingly.”

Is Metadata the Real Threat?

After Edward Snowden leaked documents revealing a great deal about NSA surveillance programs, there was a minor backlash by the public and concerns were raised for a time.

Then President Obama even came out and stated that nobody was listening to what people are saying on their phones. But that’s somewhat disingenuous, Schneier said, because while it may be true, it ignores a much larger concern for many: the collection of metadata on nearly all information technology users.

Metadata is essentially data about data, as Schneier put it, and it reveals who we talk to, where we are, what our habits are, and much more that amounts to a profile of our behavioral life.

This data collection allows businesses and governments to identify users, figure out their interests and behaviors, and reveal more about them than a single surveilled phone call or email ever could.

“One of the things we’ve learned in the past couple of years is that this metadata — these contact lists, these lists of who we’re talking to and, as well, our movements — is actually more intimate than a cellphone call’s contents,” he said. “This is the reason why everybody wants it so badly.”

What we’re seeing is a public essentially permitting widespread surveillance in the name of convenience, and it opens us up to potential manipulation.

“It’s a combination of Huxley and Orwell with some Kafka mixed in,” Schneier said. “The whole point of this data is to do things to you. The reason the government wants this data, the reason the corporations want this data, is to manipulate you.”

The Chinese government, for example, already relies on metadata to identify and control political opposition.

With a database of meta information about everyone’s movements, for example, it’s possible to do searches backward in time to identify where people have been.

The reality is, though, that all of this information collection doesn’t appear to help thwart terrorism, Schneier noted.

Repeatedly, we’ve seen that what prevents terrorism is following the leads, using targeted surveillance, investigation and emergency response, he added.

“Society really can’t exist in present form in a surveillance state,” Schneier said. “Change is inevitable. … I always find that social issues go from impossible to inevitable with no intervening middle ground. It’s not a slow, steady progress: it’s almost a flip. And we are still pre-flip in surveillance.”

Read Data and Goliath: The Hidden Battles to Collect Your Data and Control Your World on Amazon by clicking here. Subscribe to FS Insider and listen to all our daily interviews with leading guest experts by clicking here.