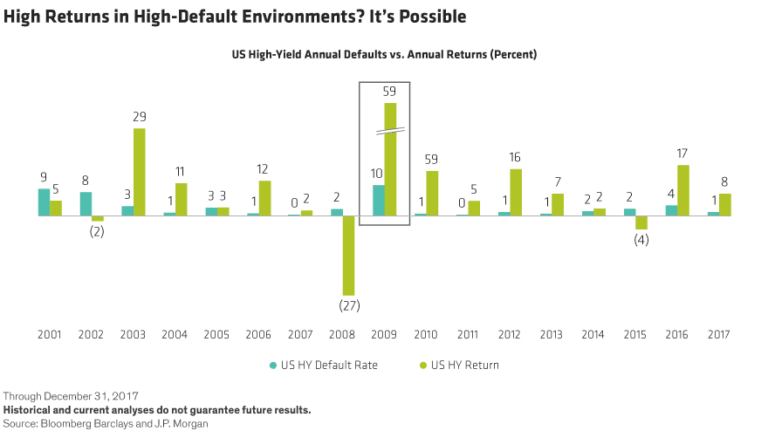 Market conditions may change in 2018, and that’s good for income-oriented investors. Yes, interest rates are rising and some assets look expensive. But there are still plenty of horses to ride in this race.

The ride may be rough at times, and assets will go up and down. To keep pace in this environment, investors will need a strategy that embraces multiple sectors and is able to go anywhere around the world to generate income.

Last year, short-term interest rates rose slowly but steadily in the US and began heading higher in Canada and the UK. And high-yield bonds and other credit securities delivered strong returns, thanks in part to solid global growth.

On the other hand, unusually loose global central bank policy over the last decade has helped to extend credit cycles and raise asset prices in many parts of the world. Today, US and European high-yield credit spreads—the extra yield these bonds offer over comparable government debt—are at multiyear lows.

Don’t Sweat the Default RateCould higher borrowing costs result in more high-yield defaults in 2018? Possibly. Last year, default rates among US and European high-yield companies hovered near historical lows. In the US, they were actually declined as the energy-sector defaults that accounted for nearly two-thirds of the total in 2015 and 2016 combined, subsided.

But a higher average default rate isn’t necessarily bad news for returns. Over the past two decades, jumps in the default rate have usually been followed by big increases in returns (Display).

Another thing to remember is that high-yield sell-offs have historically been short lived. Those who stay invested tend to make up their losses quickly. Over the past two decades, high yield has recovered most big drawdowns—losses of more than 5%—in less than a year.

All this suggests to us that now isn’t the time to cut high-yield exposure to zero. It is the time to be selective and hunt for values within sectors.

Over time, the most effective income-generating strategies reach beyond high-yield corporates. That should be the case in bull and bear markets alike—and everything in between.

Investors who want to dial back their exposure to high-yield bonds can still find plenty of high-income opportunities elsewhere. That includes credit risk–transfer (CRT) securities, a fairly new type of mortgage-backed bond issued by US government–sponsored housing agencies.

It also means venturing beyond national borders. Last year, for example, emerging-market (EM) bonds were strong performers, particularly those issued in local currencies. EM currencies can be volatile assets, and 2017 was no exception. Even so, EM local-currency bonds returned more than 15% on the year.

We still see opportunity in the sector, though the potential impact of tighter US monetary policy and a stronger dollar means investors will have to be selective.

It’s All About Income

Central banks are likely to continue tilting toward tighter policy in 2018. The Federal Reserve, for example, isn’t just raising rates. It’s also expected to shrink its massive balance sheet—swelled by its post–financial crisis asset purchases—by more than a trillion dollars over the coming years. The European Central Bank may soon follow suit; we expect it to end its own monthly bond purchases by year-end and to start raising interest rates in 2019.

As we’ve noted in earlier posts, this process of quantitative easing in reverse underscores why it’s also important to maintain an allocation in your overall fixed-income portfolio to risk-reducing assets such as global government bonds.

But it doesn’t guarantee negative returns in credit. Sure, investors probably shouldn’t expect the kind of double-digit returns we’ve seen in recent years. But there’s still good reason to have a diversified high-income strategy and a manager with the wherewithal to find attractive opportunities within sectors.

We certainly understand investors’ hesitations and concerns. Markets—and the global economy—do appear to be at an inflection point. The need for extraordinary central bank support is fading.

But if there’s one constant in investing, it’s the need for income. That was the case when interest rates were high in the 1980s. And it’s been the case over the last decade of record low rates and yields.

Earning income isn’t a sprint; it’s a marathon. For investors with long investment horizons, higher rates are good news. And a global, multi-sector income strategy that includes but is not limited to high-yield corporates offers the best chance of long-term success.