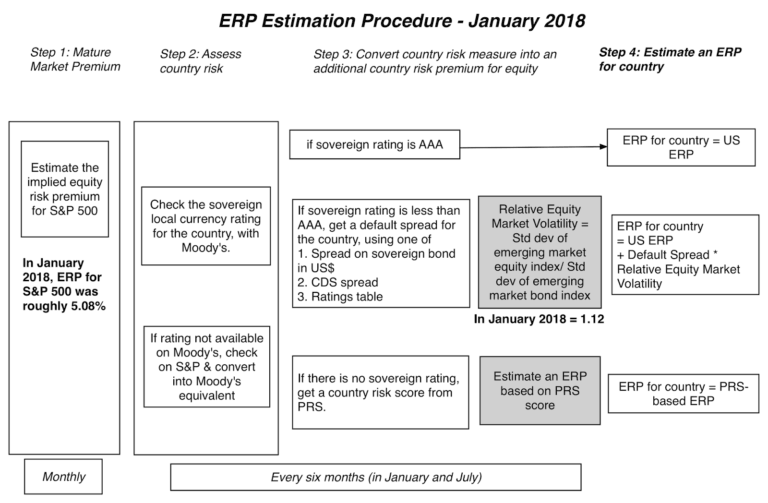 In my last post, I looked at the currency confusions that globalization has brought into financial analysis, and how to clean up for them. In this post, I discuss the other aspect of globalization that is forcing analysts to change long accepted practices in estimating equity risk premiums for companies. Taking what they have learned from finance textbooks blindly, practitioners have taken what they learned about equity risk premiums to emerging and frontier equity markets, often with disastrous results. Not only have they practiced denial when it comes to the additional risk that investors face in many markets, from political, economic and legal sources, but they have also considered risk by looking at where a company is incorporated, instead of where it does business. In this post, I will update my country risk measures for the start of 2018, and build on them to measure the equity risk premiums for companies.

The more widely measured and accessible measures of sovereign risk are related to sovereign default, and as we noted in the post on currency risk free rates, there are three ways in which default risk in countries can be measured. The first is to use government bonds, denominated in US dollars or Euros, issued by sovereigns and to compare the rates on these bonds to a US treasury or German Euro bond rate. The second is to use the sovereign CDS spreads for countries, market-driven numbers, as default risk measures. The third is to use the sovereign ratings of countries as proxies of default risk and to convert these ratings to default spreads.

The leading ratings agencies including S&P, Moody’s and Fitch have long since expanded their business of rating bonds for default risk from corporations to looking at entire countries. These “sovereign” ratings are estimated on both foreign currency and local currency terms, with the ratings spectrum ranging from Aaa to D, just as with corporate bonds. One way of capturing the default risk variations across the world is with a heat map, based upon local currency sovereign ratings:

Note that while there are clear differences across regions, with Latin America and Africa containing more risky (red) areas than Europe and North America, there are also differences within regions. You can download the S&P and Moody's ratings, by country, at the start of 2018, by clicking on this link.

While sovereign ratings provide accessible measures of default risk in countries, they come with limitations. The ratings agencies are not only sometimes wrong in their default risk assessments, but they are often late in reassessing default risk (and sovereign ratings), when conditions change quickly in countries. It is these weaknesses that are remedied, at least partly, by the sovereign credit default swap (CDS) market, where investors can buy insurance against sovereign default. The market-set prices for sovereign credit default swaps provide updated measures of default risk, at least for the 70 countries that they exist for, and the levels of these spreads are in the table below:

I don’t want to oversell these CDS spreads as better proxies of default risk. While they are certainly more dynamic and reflective of current risk that sovereign ratings, they are market numbers and like all market numbers, they are volatile and reflect market mood and momentum, as much as they do fundamentals.

Sovereign or country equity risk measures are more difficult to come by than sovereign default spreads. First, there are services that try to measure the political and economic risk in countries with scores, albeit with no standardization. Second, the default risk measures can be converted into equity risk measures by scaling them for the additional risk in equities.

The World Bank, Political Risk Services (PRS) and the Economist, among others, try to measure the total risk in countries. Those scores have no standardization and cannot be compared across services, but they still represent more comprehensive measures of risk than sovereign ratings or CDS spreads. In the heat map below, you can see the country risk scores reported by PRS, with higher scores indicating lower risk.

Comparing this picture to the sovereign ratings map, there are clearly overlaps, where the country risk scores from PRS and the ratings deliver the same message; Latin America, Eurasia and Africa remain high risk zones and European countries have lower risk.

The problem with risk scores is that they cannot be easily converted into risk premiums to use in cost of equity calculations. It is to overcome this problem that I return to sovereign default spreads, not as measures of equity risk, as is often the practice, but to use them as starting points for measuring the equity risk in countries. In particular, I estimate the relative equity market volatility, computed by scaling the volatility or standard deviation in equity to the standard deviation of government bond, and use that to scale up sovereign default risk to sovereign equity risk:

Using this approach does require traded government bonds, available for only a handful of countries. To generalize this approach, I use the ratio of the volatility in an emerging market equity index to the volatility of an emerging market government bond index, using the most recent five years of data. That ratio, which is 1.12 at the start of January 2018, is used to convert sovereign default spreads to country risk premiums. 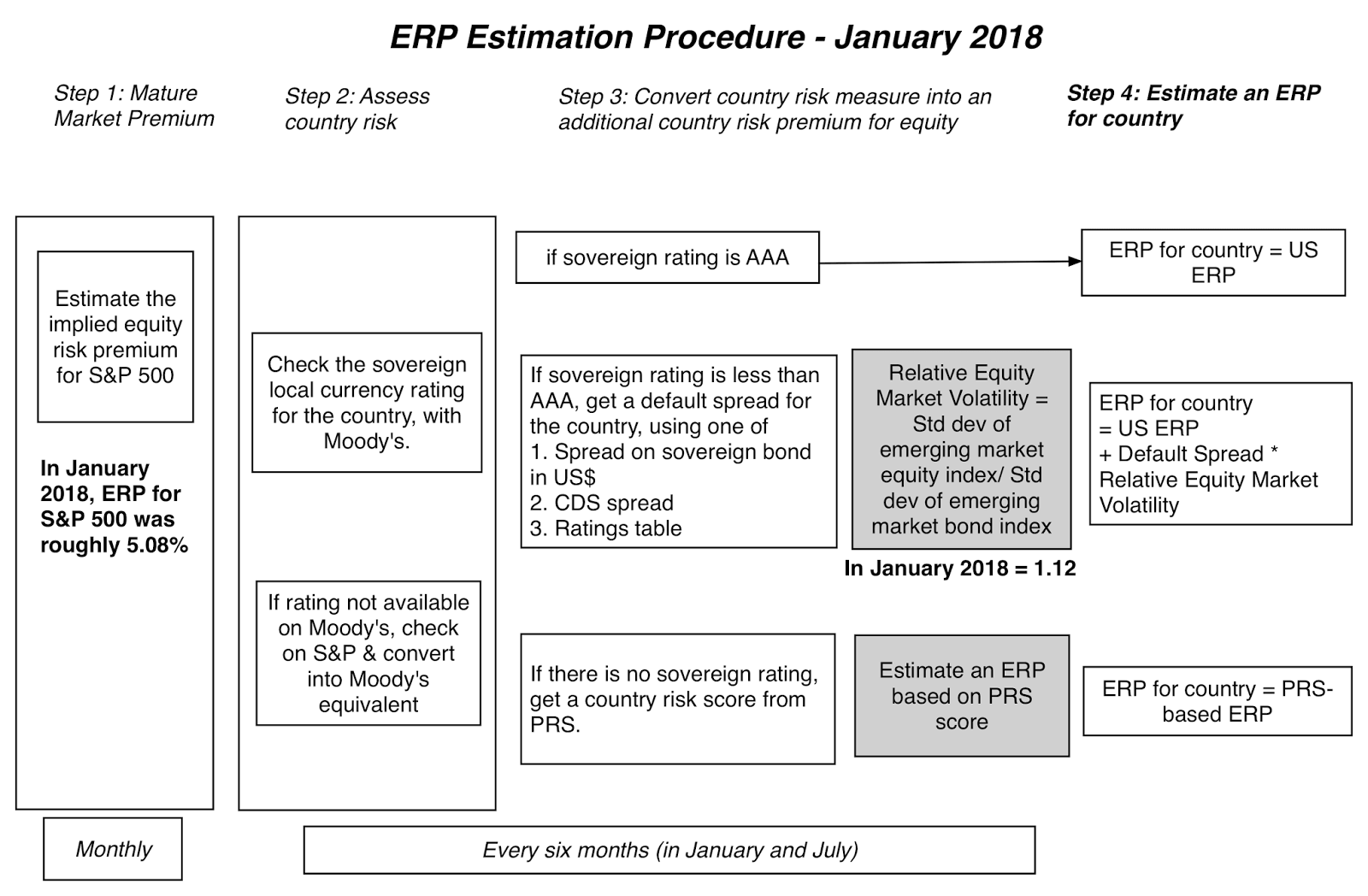 If the heat map does not provide enough specifics, this picture may be better: 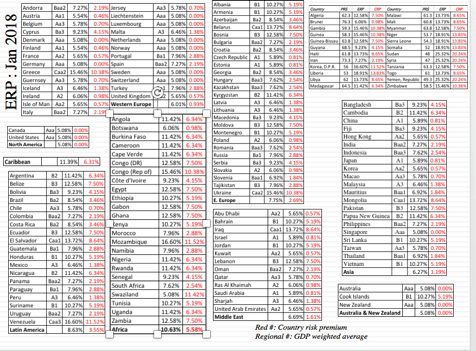 Finally, if you prefer the data as a table, you can download the spreadsheet with the data or my more detailed country risk premium dataset.

A company's risk does not come from where it is incorporated, but where it does business. If we adopt this perspective, it is clear that to value a company, you need to see its risk exposure to different countries, either because it has its production and operations in those countries or because it sells its products or services there. That risk exposure, in conjunction with the equity risk premiums of the countries estimated in the earlier section, can be used to compute the company's equity risk premium. To illustrate this concept, consider LATAM, the Chile-based airline. To compute its equity risk premium, I would compute the weighted average of the countries that LATAM derives revenues from which includes most of Latin America and the US. For companies like Coca Cola, which may be in too many countries for this approach to be easily applied or where the country breakdowns are not available, you can use regional equity risk premiums. In the table above, I report on the GDP-weighted average ERP for regions of the world. If you accept this rationale, the following implications follow:

It is a pity that accounting disclosure requirements have been so focused on trivial matters that have little effect on value and have not really paid attention to the type of information companies should be disclosing to investors on geographic operations.

If, as the Chinese symbol (危机) for crisis suggests, danger plus opportunity equals risk, it is not surprising that the most risky parts of the world also often provide the most potential for growth. By demanding higher equity risk premiums for investing in these parts of the world, I am not suggesting that you hold back from investing in these risky regions, but only that you demand enough of a premium for exposing yourself to additional risk. After all, investing should never be bungee jumping, where you take risk for the sake of taking risk!