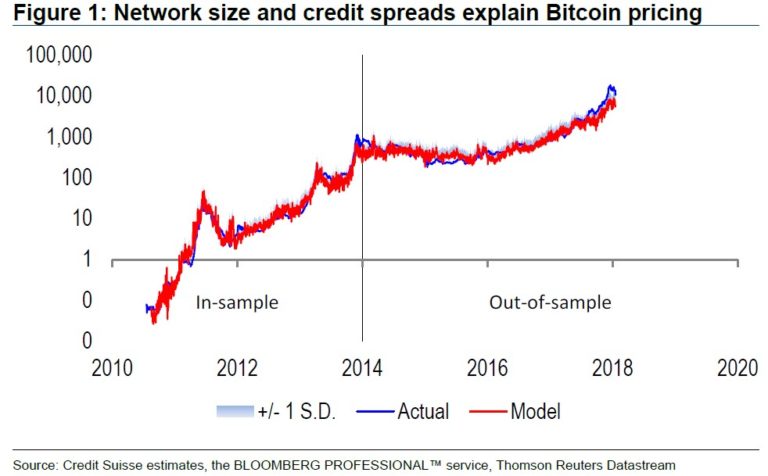 Bitcoin valuation plunged under $10,000 for the first time in more than a month, and experts warned that the next stop could be all the way down to $8,000. Negative regulatory news has weighed on the cryptocurrency’s value, and now one analyst has noted a very interesting negative correlation for bitcoin. He argues that in order to see where bitcoin valuation is heading next, one just has to look at BBB credit spreads.

He also offered up two red flags that serve as warning signs that bitcoin is about to fall off a cliff. Based on his observations, it’s looking like the market is right to be panicking about bitcoin valuation right now.

Credit Suisse analyst Damien Boey noted that central banks around the world seem a bit threatened by bitcoin, as authorities in multiple countries have spoken publicly about the risks. Some even favor an e-currency that’s controlled by central banks. He notes that the problem with that is the fact that it goes against the fundamentals of the blockchain technology cryptocurrencies are built upon, although we would point out that Ripple Labs’ XRP tokens have been hugely successful even though they are controlled (although not by a nation’s regulators).

Amid all the concerns raised by regulators around the globe, the cryptocurrency markets have been rocked by talk of crackdowns in several Asian markets, which is largely blamed for the plunge in bitcoin valuation. The Independent argues that governments will either ban cryptocurrencies or regulate them and then tax them, explaining that it’s not possible to have “a world where there is a huge push to clamp down on off-shore tax havens that allows an off-shore ‘currency.'”

The “off-shore” reference is undoubtedly a reference to the massive Panama Papers leak, which spotlighted names of well-known and influential people accused of exploiting off-shore tax havens.

As regulators express concerns about cryptocurrencies, Boey turns attention to empirical valuation of bitcoin. He calls to mind Lee’s approach to bitcoin valuation. He argued that bitcoin carries network value similar to Facebook or telecommunications grids, and as a result, the digital currency’s networking value should increase in line with Metcalfe’s law, or “proportionally to the square of the number of users (or unique addresses) in the system,” Boey explained. 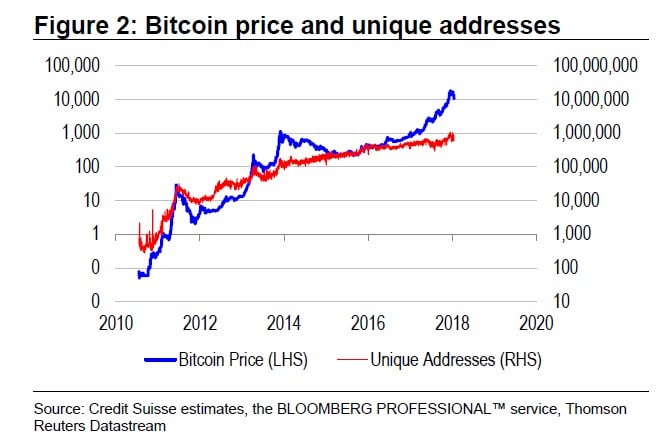 He said that about 94% of the variation in bitcoin within the last four years can be explained in this manner, but it comes up short of providing a full explanation. According to him, Lee’s model for bitcoin valuation is incomplete because it doesn’t have a “cointegrating relationship with unique address and average transaction value,” meaning that “network variables do not sufficiently anchor bitcoin’s valuation.”

Boey also said that Lee’s model fails to address Granger causality because the price of bitcoin “leads the number of unique addresses, rather than the other way around.”

Adding credits spreads into the calculation for bitcoin valuation

To address these two shortcomings, he adds BBB corporate credit spreads to Lee’s model for bitcoin valuation. When adding spreads into the mix, the Credit Suisse analyst finds that bitcoin prices are -100 times sensitive to them. He explained that a 1% widening or narrowing of the BBB credit spread results in a decrease or increase of 100 logarithmic points.

Looking at this in the extremes, he argues that it implies that leverage has actually been used to fund investments in bitcoin over time. On the other hand, however, he adds that it could just mean that bitcoin valuation is just “highly sensitive to whatever has driven credit spreads over the past few years,” such as quantitative easing applied by central banks.

“Either way, the sort of leverage that Bitcoin has to credit seems to be well and truly above the ‘toxic’ products available prior to the financial crisis,” Boey explains. “This was hardly the original intention of inventor Satoshi Nakamoto!”

Where should bitcoin valuation be?

Using his model, he argues that a fair bitcoin valuation should be closer to $6,000 at this time, meaning that despite the precipitous plunge in the price, the cryptocurrency could still be vastly overvalued. He added that this finding is consistent with the growing number of warnings from regulators about “excessive speculative interest” in bitcoin.

He also said that this doesn’t mean bitcoin prices will be sliced in half very soon because it’s possible that fundamentals will change fast. However, it does mean that the current bitcoin valuation could be very high.

Two warning signs that bitcoin valuation is about to plummet

The Credit Suisse analyst added that he’s concerned about the dynamics of bitcoin and how unstable it has become, especially because its price is strongly connected to credit.

“Perhaps unwittingly, Bitcoin investors have taken on extremely leveraged positions in credit spread compression,” he wrote. “We believe they ought to be aware of their underlying exposures. After all, with credit spreads approaching historically low levels, and central banks likely to reduce their asset purchases, there is far more upside to spreads than downside, creating far more downside to Bitcoin prices than upside.”

Boey also offered two red flags as a sort of “danger scenario. One of them is already starting to take place and thus already impacting bitcoin valuation, and that is a crackdown on the digital currency by the world’s regulators. The other red flag is if there’s a material widening in credit spreads, which we’re just starting to see.

“If both events occur, Bitcoin prices could drop precipitously,” he warned. “Bitcoin is not a hedge against financial instability.”