ValueWalk
Home Economics If you own bonds, you should be worried.

I attended last week’s InsideETF conference in Florida – the world’s largest ETF conference. I was lucky to be one of the presenters. I also sat in a few sessions to hear specifically what fixed income portfolio managers were saying. The majority of them made a case for owning the asset class (not surprising) which I completely disagree with.

I can’t help but worry about investors who are long bonds. Judging by the $2 trillion of inflows into bond funds since 2009, there are quite a number of them.

Trump's tax plan is inflationary in nature and inflation is just plain awful for bond holders. Interest rates have found a bottom and are rising as economic growth around the world improves. Again, not a good combination for bond holders.

The people who purchased $2 trillion of bonds unfortunately have paid some pretty horrendous prices for them. Your entry point is everything in this game.

Luckily, investors of Astoria don’t have to worry because we have modeled for this since day 1. From the day Astoria was launched, we have been vocal in saying that we want to own as little fixed income exposure as possible for our investors.

To be clear, we do own a very small amount of bonds but its 1) mostly out of benchmark (so funding risk is minimized if the $2 trillion inflows reverse) and 2) what we do own is short duration.

The real story and value add of what Astoria is doing is that we are replicating the risk characteristics of fixed income securities via other asset classes. For elements of carry, we are using commodities and emerging market debt. For diversification and hedging, we are using liquid alternatives, gold, and the long bond (the latter is less than 2.5% of our portfolio).

To generate income for our portfolio, we are using non traditional fixed income segments such as leverage loans, preferred equities, and high yield munis. We argue there is far less credit and interest rate risk in these securities compared to the standard fixed income indices.

Below is an extract from our 2018 year ahead outlook which specifically addressed Fixed Income (published on Dec 6, 2017). I am also attaching a link to a podcast I recorded on Dec 8, 2017 with Jeremy Schwartz, Director of Research of WisdomTree, where I discussed our bearish views on Fixed Income. https://soundcloud.com/user-20931378/behind-the-markets-podcast-john-davi-bruce-lavine

o  Bonds were a tremendous asset class to own in the 70s, 80s, and 90s. All you needed to do is buy the Aggregate Bond Index and you got (1) high income (2) diversification (3) hedging (4) carry. What more can you ask for? Hence, a spectacular bubble forms.

o  Unfortunately, in recent years because of the apparent “low growth & low return world” that we “supposedly” have been living in since the Credit Crisis, investors flocked into bond funds to the tune of $2 trillion of inflows. Sadly, in doing so, the vast majority of the equity bull market was missed by investors (at least from 2009 to 2016; post Trump’s election positioning has changed significantly).

o  Buying the Aggregate Bond index now is neither a risk reduction tool (duration has increased & correlations to stocks have increased) nor an income play (yield is only 2.5%). As far as diversification, common sense should tell you that if $2 trillion of inflowsgoes into any asset class, it no longer will provide the diversification benefits it may have done several decades ago.

Bonds Are No Longer the Risk Reduction, High Income, & Uncorrelated Asset They Were Decades Ago 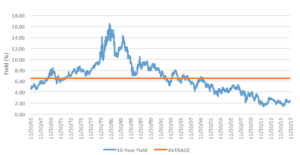 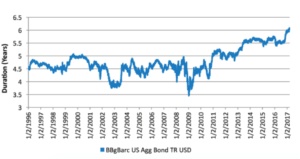 o  Astoria has written extensively why we utilize PFF (iShares U.S. Preferred Stock),SRLN (SPDR Blackstone/GSO Senior Loan), EMB (iShares J.P. Morgan USD Emerging Markets Bond), and HYD (Van Eck High Yield Municipal). None of these are providing the opportunities they did years ago but they offer a modest margin of safety and their yields are double that of the Aggregate Bond index. For inflation protection, we prefer TIPs and commodities. And for hedging market risk, we prefer going outside of fixed income.

o  The pushback we get on owning the long end of the curve is that the Fed owns a ton of long dated maturities. However, from our perch the Fed isn’t selling those bonds but instead allowing them to roll off.  The real risk for backend is if inflation picks up significantly.

o  The long end isn’t priced for inflation as forward rates all top out around 3% which is the Fed’s long-term dot in the SEP.  If inflation picks up, then the long-term dots should go up. Subsequently, the market inflation expectations can rise which will raise nominal rates and term premiums.

o  The back end of the US curve is still significantly higher yielding then most other developed bond markets. In Astoria’s view, the demand for the back end will continue until other Central Banks stop their QE programs and international yields back up.

Any ETF Holdings shown are for illustrative purposes only and are subject to change at any time.  For full disclosure, please refer to our website:  astoriaadvisors