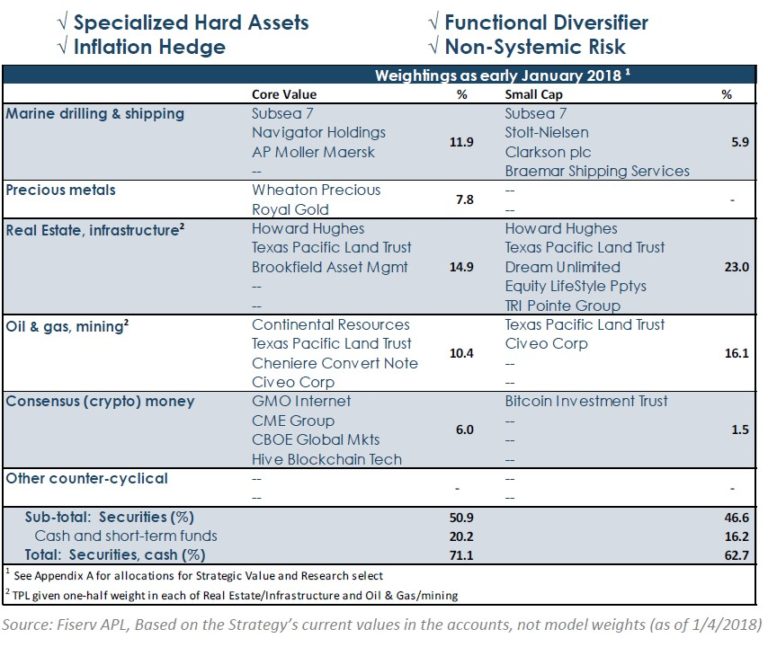 Part 1: The CalPERS Return Problem and its Contribution to the Bubble.

Part 2: Our Allocation to Inflation Beneficiaries and Other Diversifiers

They seem exposed to the very same securities at the center of the indexation fund flows as a retail investor directed by an online robo-advisor.

And Its Contribution to the Bubble

In December 2016, the Board voted for a change in its allocation to support the existing plan to reach as even percent discount rate.

In a low-growth, record-high-valuation environment, a major risk to bond prices in particular is an increase in inflation or interest rates. Yet, not only did CalPERS increase its weighting to below-required-return bonds as well as stocks, but in order to increase those weightings, it reduced its allocation to Inflation Assets and Real Assets by 6% points; the Fund also reduced cash, which provides flexibility in the event of sudden, large price changes, to almost zero.

And this is only one of the innumerable vectors of buying demand that help perpetuate bubbles.

Inflation Beneficiaries and other Diversifying or Counter-Cyclical Holdings

The businesses identified on the right are not only markedly  different  than the broad stock market –information technology and finance being the two largest sectors – they differ markedly from ea ch other: in their business models, the way  they derive  their revenues and customers, and the factors that may cause  them  to  do well or to recover if they happen to be depressed . They comprise between about 35% and 55% of ea ch strategy.

And if we include the 15% to 25% cash balance – a value-elastic  asset  –  in ea ch strategy,  the  differentiable chara cter of these portfolios is even more substantial. 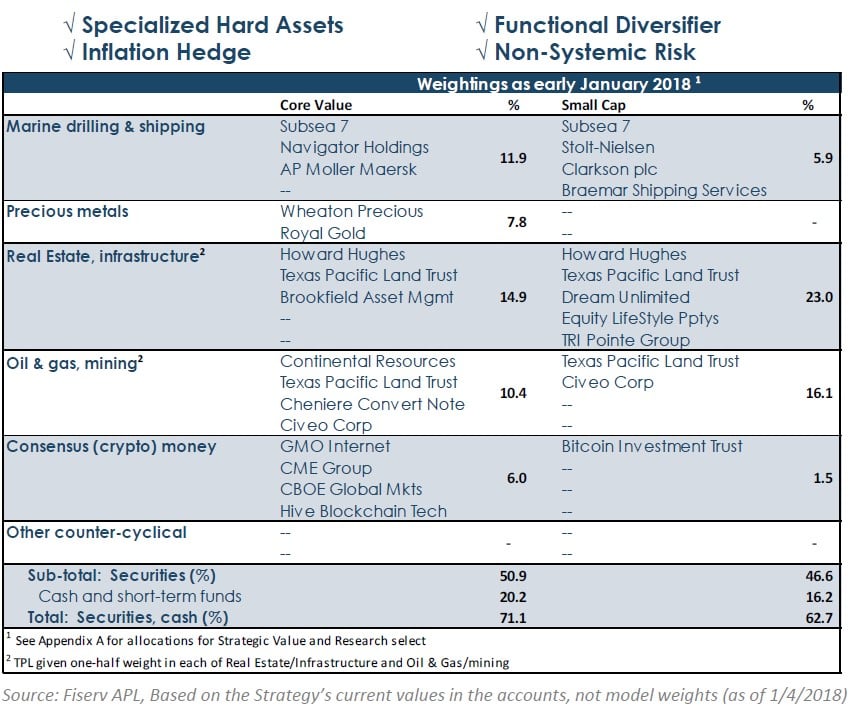 The first questions were: do the portfolios have any inflation-beneficiaries?

Having shown you, the next question might be: why do you have so much? And what about timing?

We’ve been preparing our portfolios for preservation of purchasing power :

Timing?   The only time to get a good price in a tourist shop is when the season is over, the tourists have left, and the shopkeeper has a long winter ahead.

One reason for so many counter -cyclic als is pure investing opportunism : the best time to buy, say, an inflation -beneficiary security is precisely when no one is concerned about inflation. That’s when they sell at deep discounts, and you don’t pay a premium for the  characteristic  you want.  The prices  tell you all on  their own . That’s usually when no one wants them or expects a recovery or is willing to wait for a recovery, i.e. pre-position yourself in securities that already provide alluring safety and return characteristics

Some Diversifying Industries and Companies

These are among the most depressed industries in the world. A couple of examples will illustrate:

This off-shore drilling rig operator had 56% lower revenue in 2016 than in 2009. But it still generates substantial free c ash flow, and has no debt maturing until November 2023. Controlled by the Tisch family, it has a certain staying power and therefore represents a long -term call option on higher oil prices. How much optionality? The c ompany trades at only 3.4x its average earnings since 2004. If a recovery P/E ratio is only 12x, the shares would  appreciate  by 3.5x. Even if that were to take 5 years to accomplish, it would be 28% per year.

This largest container shipping company in the world does not depend on a recovery in oil prices . It is a family - controlled business, is also profitable, has repurchased substantial quantities of shares, has recently acquired a significant failed competitor, and simply requires a normalized rebalancing of the excess supply of ships  with  demand  from  the persistent rise in from global trade, in order to provide a very robust rate of return . It trades at about 1.1x book value .

Clarkson and Braemar fall into the croupier c ategory of business model -- intermediaries  who don't risk any serious amount  of c apital, but take their fair share of the a ctivity of other participants . These are shipping brokers which  are  asset -light businesses . They don’t own ships; they provide information about ships. Moreover, they are diversified a cross the spectrum of shipping sectors, so their exposure is to tankers, container ships, bulk carriers, and so forth. They are profitable, despite the market depression .

And they also have an additional form of earnings leverage in that a portion of their fees are  a function  of the vessel lease rates . Ergo, if container shipping rates rise sharply, that will be reflected to a degree in revenues, separate from increased transa ction activity . The investment return will be lower than in a recovering direct and asset -intensive operator, but it should be high nevertheless.