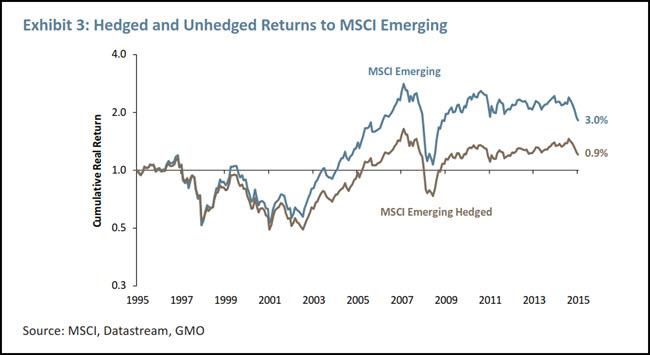 Should I hedge currency risk in my portfolio?

This is a good question a subscriber asked. It is also a question I have given a lot of thought and done a lot of research on as I invest my own money wherever in the world I find the most undervalued good quality companies.

What is a currency hedging?

If you have a portfolio with foreign currency denominated companies in it (Japanese for example) your portfolio will be hedged if you have an equal and opposite investment in the currency (a loan in Japanese Yen).

How does hedging work?

To hedge a currency you have to borrow the foreign currency and invest the borrowed money in that market.

Let’s look at an example.

Say the currency where you live is Euro and you want to invest in Japan but you do not want to sell your Euros and buy Japanese Yen because you are worried that the Yen will fall in value against the Euro and so give you a loss on the capital you invested.

To not have any Yen risk you have to borrow Yen and buy the shares in Japan with the borrowed Yen.

When you sell the Japanese shares you will use the money to repay the Yen you borrowed and only the profit or loss will have to be converted to Euro.

Remember you will ALWAYS have currency risk on your profit or loss as you only hedged (borrowed Yen) for the capital you invested.

But when you borrow money you have to pay interest.

You thus borrow Yen and have to pay interest on this loan. Some brokers allow you to do this quite easily but they charge quite a lot for these loans. And you have to pledge your portfolio to your broker as security for the loan. Remember the broker needs something as security should you not repay the loan.

Yen interest rates are very low but even if your broker charges only 2% per year - if you hold the investment for 3 years – the loan will cost you a total of 6%.

What does the research say?

In the third quarter of 2015 GMO (www.gmo.com free registration required) published an interesting quarterly report called: Just How Bad Is Emerging, and How Good Is the U.S.? and Give Me Only Good News!

In the report they looked at the hedged and unhedged returns of emerging markets over the 20 year period from 1995 to 2015.

In the report they wrote:

Is it just a currency thing?

Falling currencies have indeed been a significant driver of losses in emerging equities over the past few years. In the 12 months ending September 30, for example, the local return to emerging stocks was -7.1% while the loss from the currency movements cost 13.1%. This might tempt one to think about currency hedging their holdings in emerging markets, but this turns out to be a bad idea historically.

In fact, it seems to be a spectacularly bad idea, as we can see in Exhibit 3.

Source: www.gmo.com Just How Bad Is Emerging, and How Good Is the U.S.? and Give Me Only Good News!

This is a truly striking chart. Since 1995, the rather anemic returns of +3.0% real in U.S. dollars for emerging equities turn into a truly depressing +0.9% real. So much for the idea of currency hedging!

So for emerging markets hedging is a bad idea

So if you invested in emerging markets hedging currency risk was a bad idea over the 20 year period from 1995 to 2015.

In the newsletter I do not recommend emerging market companies which mean this research report is not that relevant but I am sure you also found its conclusion very interesting.

In the paper they looked at 34 years of data to find out if currency hedging is worth it.

The result of the paper can be summarised in the following chart which shows the benefit or loss to your portfolio if you hedged currency risk:

What does the chart tell you?

What can you learn from the chart?

What can we learn from the above two examples?

I have been investing for 30 years and have never hedged currencies.

I thus do not recommend that you hedge currency movements.

Like you I want to keep investing as simple and systematic as possible. Hedging currency risk is not something I want to do if over time it is most likely to only increase or decrease your investment returns by a small percentage.

If you want to hedge – do this

You may have a different opinion to hedging currency risk and that could of course also be correct.

If you do you must make a conscious decision and then stick to it – this means hedge all the time. If not you will most likely start hedging after a large currency loss, just as the currency turns around.

Your not hedging analyst wishing you profitable investing

PS Would you like to get market beating investment ideas delivered to your inbox every month? Is so find out more here: Get Investment Ideas from Only the Best Strategies