ValueWalk
Home Economics Hedge Funds Round Up 2017 In Positive Territory, Up 8.24% With Long... 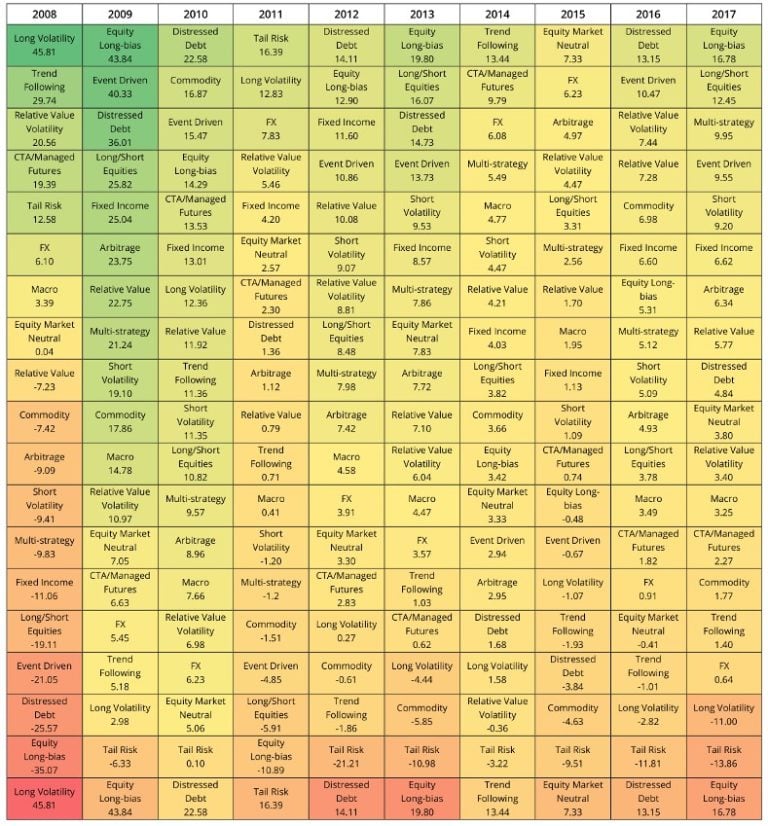 Hedge funds closed the final month of 2017 in positive territory with the Eurekahedge Hedge Fund Index up 0.84%1 in December while the MSCI World Index2 finished the month up 1.19%. For 2017 as a whole, hedge funds were up 8.24%, while underlying markets as represented by the MSCI World Index returned 17.55% over the same period. Equity long-biased hedge funds have been the star performers for 2017 returning 16.78%, whilst long volatility and tail risk funds have ended at the bottom of the league tables down 11.00% and 13.86% respectively. Roughly 35% of the fund managers have posted double digit returns in 2017, up from 19% in 2016. Ongoing political and economic events hold much uncertainty in store for 2018, but in the interim, tax cuts in the US are likely to provide a further boost to equity markets.

Below are the key highlights for the month of December 2017:

All regional mandates ended the year on a positive note with both Eastern Europe & Russia and Latin American managers topping the table - up 2.99% and 2.55% respectively. Latin American mandated hedge funds reversed their two month losing streak to bounce back in December as equity markets had a good month, with the Brazilian IBOVESPA up 6.16%, largely on the back of oil price stabilisation as well as the waning inflationary numbers which led to a reduction in interest rates in the region. The Eurekahedge Emerging Markets Hedge Fund Index also posted positive returns during the month, up 1.65% as similar themes also supported managers with a broader emerging market mandate focus.

Lacklustre performance of underlying Asian markets did not deter Asia ex-Japan managers from posting gains of 1.22% in December, underperforming the MSCI Asia ex-Japan Index (Local) which gained 1.89% over the same period. This is followed by Japanese hedge fund managers who gained 0.93%, with the Nikkei 225 Index climbing a modest 0.18% in December. North American mandated hedge funds were also in positive territory this month, gaining 0.91% buoyed by well-performing equity markets which traded higher on the back of encouraging macro data, corporate earnings and progress of Republican tax reform from the US. Despite the political instability in the European region, European hedge fund managers posted modest gains of 0.38% with the DAX and CAC Index down 0.82% and 1.12% respectively.

Overall for 2017, Asia ex-Japan hedge fund managers gained an impressive 20.64%, the best performing region for the year among its peers. Emerging mandated hedge funds were up 17.39% for the year boosted by the strong performance of underlying Latin America and Eastern Europe and Russia mandated hedge funds in 2017 which delivered gains of 15.15% and 13.22% respectively. Japanese hedge funds finished off the year in positive territory, gaining 12.77% followed by European managers with 6.93% for the year. Meanwhile North American mandated funds posted the weakest performance in 2017, up 6.62% as CTA/managed futures and macro hedge fund strategies delivered low single digit gains offsetting the gains from equity focused strategies in the region.

Performance across strategic mandates was mixed this month, with distressed debt managers posting losses of 0.54% in December, underperforming the U.S high yield market which gained 0.29%. On the other hand, arbitrage mandated hedge funds posted the best gains, up 1.34% followed by event driven mandated hedge funds which were up 1.27%. Long/short equities hedge funds gained 1.19% in December, as underlying equity markets continued their uptrend. Underlying equity long bias hedge funds posted the best gains among sub-strategies within the long/short equities mandate, gaining 1.36% while equity market neutral managers declined a modest 0.03% during the month. Central bank actions in the developed world have helped to mediate some year-end jitters to some extent. The BOJ has left its policy unchanged, while Abe’s victory in the October election and strong corporate earnings have buoyed Japanese markets. The ECB’s hawkish tone with its inflation projections weighed on euro, as the EUR/USD rallied mid-month onwards.

CTA/managed futures and multi-strategy hedge funds were also up in December, gaining 0.85% and 0.73% respectively as exposure into underlying equities and equity indices among contributors to performance. Key themes for CTA/managed futures hedge funds hinged on the reflation, with long exposure into base metals and energy contributing to performance of these mandates while short positions to precious metals generated losses to most managers. On the FX front, losses were realised from long exposure into USD versus other major currencies as the US dollar fell during the month. Among underlying sub-strategies within the CTA/managed futures mandate, commodity hedge fund managers posted gains of 2.27%, followed by trend following and FX focused managers with gains of 1.32% and 0.44% respectively. Indeed, for some trend following managers, going long on equity futures, energy and base metals have contributed to significant gains this month.

Macro and fixed income mandated hedge funds posted modest gains of 0.23% and 0.08% respectively in December, as managers reported losses from long exposure into Germany, UK and Italian fixed income instruments. Growing political instability in the European region and concerns over Brexit negotiations have resulted in investors fleeing into German sovereign debt. While positive news emerged surrounding signs of progress for Brexit negotiations, trading for Gilt was rather choppy as the Bank of England left interest rates unchanged. Indeed, movements within the fixed income space were backed by investor concerns amidst evolving European politics.

As of 2017, long/short equities funds were the best performing strategy for the year, with major themes during the year lending a 'supportive' environment for managers of this mandate to reap good gains. Global equity markets were in positive territory across the board throughout 2017 allowing managers to profit from their long books for the year.