The hedge fund industry is dead, is one common meme sweeping the financial press. There is a logic behind this claim, as funds that focused on what amounted to beta underperformance became strapped for revenue amid lowered fee structures and fleeing assets.  But one often ignored segment of the hedge fund industry, those that believe in the “hedged” nature of the title, traditionally operated as if they were an independent sect. This narrowly focused group of alternative thinkers followed uncorrelated beliefs — and they were partially rewarded in 2017. This is when the hedge fund industry grew by nearly $113 billion in net asset inflows, according to the January 2018 Eurekahedge Report. So what is this group thinking about lately? 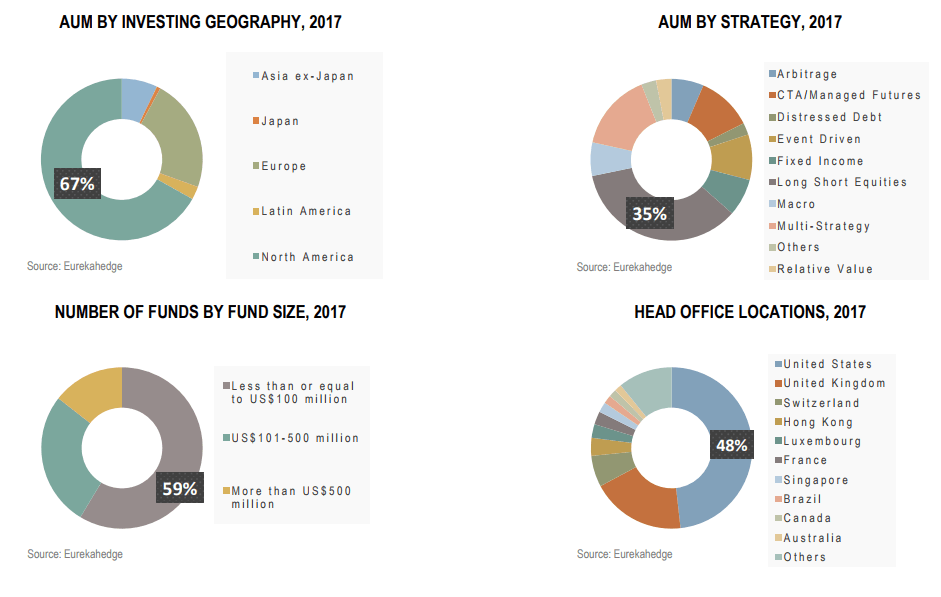 From one perspective, two uncorrelated strategy types bookended the best and worst performers. Long / Short equity strategies which had been struggling in the past, were up 11.14% in 2017. In part, with the withdrawal of quantitative dopamine, otherwise known as central bank stimulus, the markets were performing in a “natural” fashion.

Eurekahedge, for their part, acknowledged professional investor discussions regarding the “‘artificial conditions’ in the market were in part to blame for the struggling returns being posted by some of the brightest brains in the hedge fund industry.”

Allocators might be anticipating a more normalized market environment, as long / short equity fund managers grew by $93 billion in assets under management, with a large chunk coming from “performance-based gains,” according to Eurekahedge.

Long / short strategies led the net inflow race by a long margin. The second most inflows went to Macro and CTA / managed futures, each taking in $1.8 billion.

With the stock market up, CTA / Managed Futures strategies were, as expected, hugging the flat line at just 1.41% performance on the year. CTA / Managed Futures strategies are designed to respond to technical market environments that often run counter to stocks. Depending on the allocation strategy, those “beta market environments” often include price persistence, mean divergence/convergence and volatility. When technical conditions are right, which sometimes occurs during stock market price adjustments, volatility creates short and mid-term market trends – and sometimes long-term trends – which is beneficial to various CTA strategy types to various degrees.

In 2017, this strategy was the worst performing hedge fund strategy, delivering a positive gain in a negative market environment. The strategy performed best during 2008, with its technical underpinnings of looking to computer technology to guide their often systematic decisions. This concept is moving forward in new directions.

Perhaps the most interesting yet little discussed development in the hedge fund world is to consider how artificial intelligence (AI) hedge funds are taking the lead. Some systematic fund managers who pioneered the concept of computers making investment decisions, knowing their strategies are rooted in a market-based logic, are abhorred at the lack of strategic justification for some of the AI and machine learning strategies. At times, the data scientists running such programs find historical correlations that don’t make market sense. It would be like correlating the smell of brownies in the oven with cold weather outside. Yes, your father might like to bake brownies when it gets cold out, but that does not mean the correlation is a valid market trend. Valid trends most often have fundamental economic roots.

While the economic / fundamental understanding that each AI hedge fund possesses is unclear. But what is interesting is the 9.26% performance of the Eurekahedge AI Hedge Fund Index, slightly outpacing the 8.37% return posted by the Eurekahedge Hedge Fund index.

But is this return differential enough to warrant professional allocations? Eurekahedge touches on the hot topic of unneeded quantitative obfuscation in providing an understanding of the issues. They noted professional investors “keenly watching” AI hedge funds but also had a problem with the complexity and transparency that some allocators have said is unnecessarily dense:

Perhaps the most important point which was raised was that artificial intelligence (AI) hedge fund strategies can be quite complex to understand hence the due diligence process can be time consuming and costly. Further, while the use of big data in systematic strategies could potentially provide an ‘edge’ to hedge fund managers, it was more important to focus on the ‘exclusivity’ of this data because if it is publicly available then returns for AI/Big Data strategies would eventually revert to the norm.