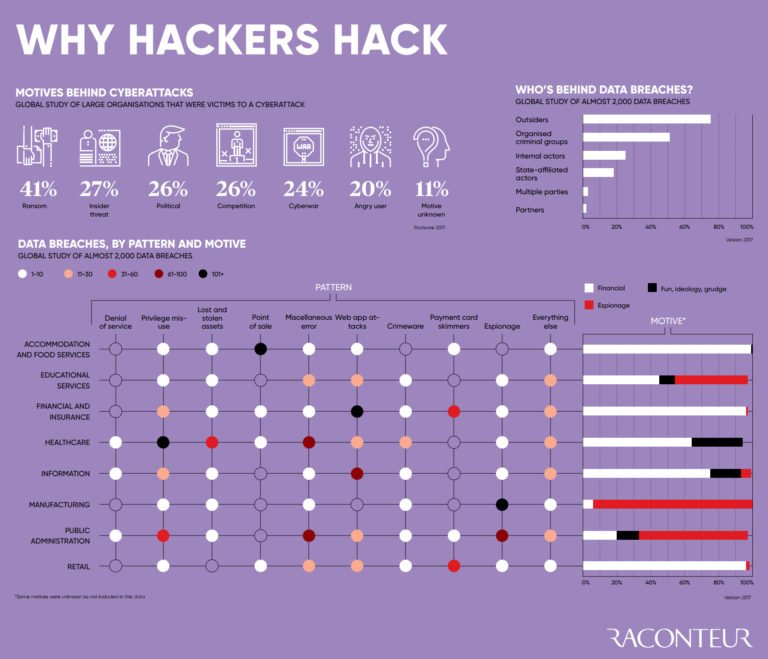 Cyberattacks caused $450 billion of damage to the global economy in 2016, and this number is predicted to keep rising as we keep adding more connected devices to the mix.

The magnitude of this impact should not be understated. It’s bigger than the size of notable economies like the UAE ($371B) or Norway ($370B) – which is why it’s no surprise to see organizations putting major resources to shore up their internal defenses and to reduce the risk of threats.

But while the origins of this cybersecurity boom may be clear, what is less obvious is why all of this hacking is happening in the first place.

Why do hackers hack, and what are the motives behind these powerful cyberattacks?

Today’s infographic comes to us from Raconteur, and it breaks down the statistics from a couple of large global studies on cybersecurity.

One of the first datasets shown comes from Radware, showing the motives behind why hackers hack:

Interestingly, ransom is a top motive at 41% – but other reasons like politics, competition, and cyberwar were pretty evenly distributed in the mix as well.

Verizon, in their 2017 Data Breach Investigations Report, break down the motives of hackers in a different way. Using the three wider categories of “Financial”, “Espionage” and “Fun, Ideology, or Grudge (FIG)”, here is how cyberattacks look over time:

Most notably, espionage appears to be on the rise.

That’s significant, because over 50% of hacks already come from organized criminal groups, and close to 20% originate from state-affiliated actors. With espionage becoming a more common motive, it suggests that cyberattacks will continue getting more sophisticated and deliberate, and that specialized teams of hackers are executing a growing percentage of the attacks.

(For a real-time view of this espionage in action, make sure to watch cyberwarfare happening in real-time.)

Hackers hack for a multitude of different reasons.

However, it does seem that the actors and motives for hacking are gradually shifting over time. Fewer cyberattacks today have FIG motives (fun, ideology, grudge), and more attacks are increasingly tied to espionage.

With more deliberate, determined, sophisticated, and team-based attackers – it’s no wonder that the cybersecurity industry is growing at a 9.5% annual clip.