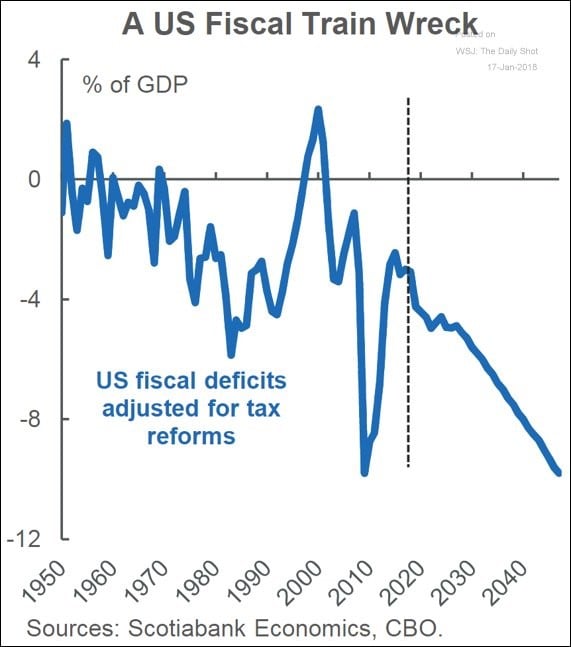 The goal of our articles is to provide both sides of the debate in a non-biased manner. We think presenting the facts allows for a debate which is a value added proposition for the readers and those following us on Twitter @TimeMoneycom. With this in mind, we’re going to look at the recent action in stocks in January which has been fabulous for the longs and painful for the shorts. We’re going to review why this amazing situation might not continue.

Clearly the tax cuts will help earnings and GDP growth in the near term, but investors’ and the government’s expectations might be too high in the long run, as we previously discussed. First, we’ll look at the government. The GOP expects 3-4% growth per year in the next decade because of their tax plan. It’s easy for incumbent politicians to make rosy predictions because they campaign on the optimistic projections. Therefore, we must take such estimates with a grain of salt.

The chart below shows the GOP’s projection is much higher than the potential output of the economy, because the high growth rate is compounded while we’re near the end of the business cycle.

It’s highly unlikely that the economy will go almost 20 years without a recession. The Fed expects 2.5% GDP growth in 2018 because of the tax plan and growth to fall back to 2.1% in 2019 as the temporary benefits phase out.

Can A Tax Cut End A 40 Year Decline In The Production To Utilization Rate?

There’s anecdotal evidence the tax plan has helped the economy such as with Apple announcing plans to make a $350 billion contribution to the economy because of the repatriation tax holiday. However, it’s doubtful high growth is sustainable and will help the economy avoid a recession for 10 more years. While the output gap is an estimate suggesting average recession expectations within 3 years, the increasing inflation rate seems to support the notion that the economy is close to being above potential as well.

Industrial Production To Utilization Has Had Lower Peaks For Several Cycles

The effective corporate tax rate has declined in the past few decades while the capacity to utilization rate declined; only lowering corporate taxes isn’t the answer. We’ll need to see more evidence of improvements before going along with the 3-4% annual growth estimate.

The Government Stimulated The Economy At A Bad Time

The reason we are bothering to focus on the GOP’s projections for GDP growth is because of the chart below.

Deficits Will Explode In The Coming Decades

The deficits as a percentage of GDP adjusted for tax reform get as bad in the future as the financial crisis was in 2008 without the negative catalyst of a recession. While most non-partisan economists don’t believe the economy will hit 3-4% GDP growth and the 30 year bond, which yields 2.91% currently, doesn’t see such an acceleration, the politicians who make the laws believe in that forecast. That’s a dangerous situation for the long term balance sheet of the US government. Those who think the government has an unlimited supply of money will be in for a rude awakening when the government doesn’t have room to stimulate the economy in the next cycle because the coffers were emptied at the end of this cycle.

Earnings estimates for the full year 2018 have risen the most since at least 1996 in the period from December 20th to January 11th. Usually earnings estimates decline from when they start being published about two years before the results are finalized. The only times the analysts are caught being too bearish is after recessions. This time is different as the economy has the most momentum in this business cycle following the passage of tax cuts, which will help corporate profit growth. The table below is the latest estimate for S&P 500 profit growth by sector for the next 2 years.

The 2018 earnings boost isn’t enough to be bullish on stocks for the long term. It’s possible we’re in a period where everything looks great, but it’s not a time to increase risk exposure as your core holding. By the time everything looks bad, the smart investors will have already long left risk assets. As you can see from the chart below, the investors intelligence survey has the most bulls ever.

Most investors are aware of the bullish case for equities, but are they aware that the spike in growth could be temporary because inflation is looking like it will finally make a run higher, offsetting real growth? Or what about the risk that the Democrats change the tax laws? In fact, the Democrats don’t need to do anything for there to be issues as the individual tax cut expires after 2025.

Longest Streak Without A 5% Correction

It’s amazing how sentiment can change with the price action. Investors will all tell you they try to sell at the top and buy at the bottom, but most are lying because sentiment is at a record high after stocks have gone on an amazing run. The S&P 500 has been on the longest streak without a 3% correction for a few weeks. Now the S&P 500 is on the longest streak without a 5% correction as well, evidenced in the table below. On a risk adjusted basis, stock market price returns in 2017 were in the 97th percentile.

Investors and the GOP leaders are on the same page as they think economic growth and earnings growth will accelerate indefinitely. It’s reasonable to see how their assertions for 2018 have merit, but long term trends such as the decline in capacity to utilization seem to make the optimistic outlook look dubious. Investors are excited that earnings estimates are moving higher for once, but inflation can cause this uptrend to reverse in a couple years. This market is the exact reverse of 2008 as volatility is low and stocks are consistently green. Just as it looked like nothing could go right in 2008, it looks like nothing can go wrong in 2018. At some point, fading the bullish majority becomes practical, not simply contrarian.