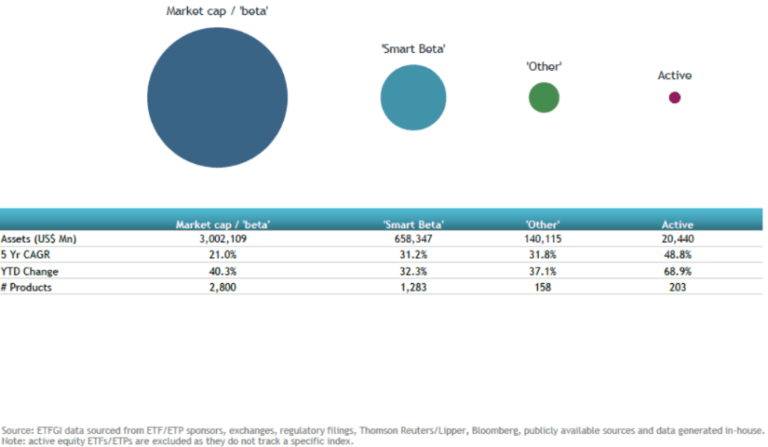 ETFGI reports that assets invested in Smart Beta ETFs and ETPs listed globally increased by 32.3% during 2017 to reach a new high of US$658.35 Bn

LONDON — January 26, 2018 — ETFGI, a leading independent research and consultancy firm on trends in the global ETF/ETP ecosystem, reported today that assets invested in Smart Beta ETFs and ETPs listed globally increased by 32.3% during 2017 to reach a new high of US$658.35 Bn at the end of December. (All dollar values in USD unless otherwise noted.)

According to ETFGI’s December 2017 Global Smart Beta ETF and ETP industry insights report, an annual paid-for research subscription service, assets invested in Smart Beta ETFs/ETPs listed globally grew by a record US$160.61 Bn during 2017, almost double the previous record of US$87.41 Bn set in 2016. The increase of 32.3%, from US$497.74 Bn at the end of 2016, also represents the greatest growth in assets since 2009 when markets recovered following the 2008 financial crisis.

The majority of these flows can be attributed to the top 20 Smart Beta ETFs by net new assets, which collectively gathered US$30.92 Bn during 2017. The Vanguard Value ETF (VTV US) on its own accounted for net inflows of US$5.08 Bn.

To conclude, investors have tended to invest in lower cost and Value Factor ETFs in 2017 with the Vanguard Value ETF (VTV US) accumulating net inflows of US$1.40 Bn and a TER of 6bp.
Please contact [email protected] if you would like to discuss the cost to subscribe to any of ETFGI’s  research or consulting services.