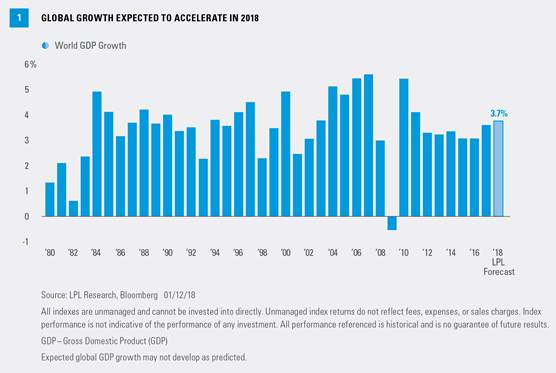 We favor U.S. and emerging market (EM) equities for tactical global allocations. After reviewing our thoughts on the U.S. equity markets in last week’s Weekly Market Commentary, we thought we’d expand our 2018 equity outlook with a focus on global markets. As discussed in our Outlook 2018: Return of the Business Cycle publication, from a regional perspective, we favor the U.S. and EM over developed foreign markets broadly, although the improving outlook in Japan is noteworthy.

The year 2017 was excellent for international equities, especially for EM. The MSCI EAFE and EM indexes returned 25.6% and 37.8%, respectively, both ahead of the S&P 500 Index’s 21.8% return. International equity market gains were broad based, as only two MSCI World countries saw their markets decline in 2017 (Russia and Israel). In general, overseas equity markets benefited from

Within the developed international benchmark, Europe slightly outperformed while Japan slightly underperformed. Within EM, where strength was led by China, some of the risks carried more bark than bite; U.S. trade relations with China and Mexico soured less than feared, while EM generally shrugged off Federal Reserve (Fed) rate hikes and the start of balance sheet normalization.

Investing in foreign securities involves special additional risks. These risks include, but are not limited to, currency risk, political risk, and risk associated with varying accounting standards. Investing in emerging markets may accentuate these risks.

We evaluate regional allocation opportunities by looking primarily at the following factors:

From a regional perspective, our 2018 economic growth outlook favors the U.S. and EM over developed international economies. For 2018 we forecast gross domestic product (GDP) growth of 2.75–3% in the United States, after factoring in the potential impact of the new tax law, and 4.8% in EM, compared with 1.8% in international developed economies, and 3.7% globally [Figure 1].*

* Please see our Outlook 2018: Return of the Business Cycle publication for additional descriptions and disclosures.

Growth in the Eurozone gained traction over the past year, with improving business confidence leading to higher investment as the worst of the political fears failed to materialize. However, uncertainties remain amidst the surge in nationalism, Brexit negotiations, and the upcoming elections in Italy. Considering these challenges, along with a reduction in European Central Bank (ECB) monetary support, it is conceivable that European growth may have peaked.

In Japan, economic growth prospects have brightened. The combination of government spending and monetary accommodation has pulled GDP higher for seven consecutive quarters. While GDP growth is expected to hover around 1.0%, inflation is projected to remain well below the Bank of Japan’s (BOJ) 2.0% target, which may keep the zero percent target for the 10-year Japanese government bond in place for the next year or two. Prime Minister Abe has a mandate for more stimulus and structural reforms after his election victory last fall.

We expect economic growth near 4.8% in emerging economies. Advantageous demographics, stable commodity prices, and early-cycle acceleration should help offset slowing but stable growth in China. We expect China’s GDP to expand near 6.5%, down slightly from 2017 estimates of 6.9%, supported by the powerful combination of gains in retail sales and industrial production.

Valuations are lower in developed international and EM than in the United States by virtually any measure. While this factor is perhaps the strongest one in favor of developed international allocations, and points to a healthy strategic allocation because valuations matter more longer term, we see potential for better value tactically in EM given the macroeconomic backdrop [Figure 3].

Relatively speaking, we believe political stability favors the United States, Japan, and China over Europe. Republicans aligned to pass the new tax law and the United States continues to have among the most stable business environments. Japanese President Abe and Chinese President Xi have both consolidated power. President Abe is pursuing market-friendly structural reforms while President Xi is emphasizing balance between market-driven forces and state-owned enterprises. Elsewhere in EM, India is becoming the “new China” under a generally pro-business Prime Minister Modi regime, and Brazil is emerging from political scandal and recession, although an unusually active election season throughout Latin America in 2018 bears watching.

Political stability in EM is atypical, but the picture is relatively encouraging at this point. The political backdrop in Europe will be important to watch and could change dramatically depending on developments in the United Kingdom (Brexit), Italy (March elections), and Germany (in the process of formalizing a governing coalition).

Currencies are also an important consideration in regional allocation decisions. Last year, a 15% gain in the euro relative to the U.S. dollar helped drive the outperformance of the MSCI Europe Index relative to the S&P 500.

We expect modest upward pressure on the U.S. dollar in 2018 as the Fed gradually hikes interest rates and allows maturing securities to roll off its balance sheet, pushing market interest rates higher, against the backdrop of ECB tapering and continued aggressive monetary policy stimulus from the BOJ. For appropriate investors, we suggest hedging currency exposure in developed international markets when possible, given our expectation that the U.S. dollar may rise.

Currency risk is a form of risk that arises from the change in price of one currency against another. Whenever investors or companies have assets or business operations across national borders, they face currency risk if their positions are not hedged.

We favor U.S. and EM equities over their developed international counterparts in 2018. In the United States, a slight pickup in economic growth and fiscal stimulus, including the new tax law, are supportive of a continuation of the bull market. We expect strong economic growth and attractive valuations to help EM offset tighter global monetary policy in 2018. In developed international markets, though our outlook for Japan is positive, growth in Europe may be peaking while structural concerns remain.