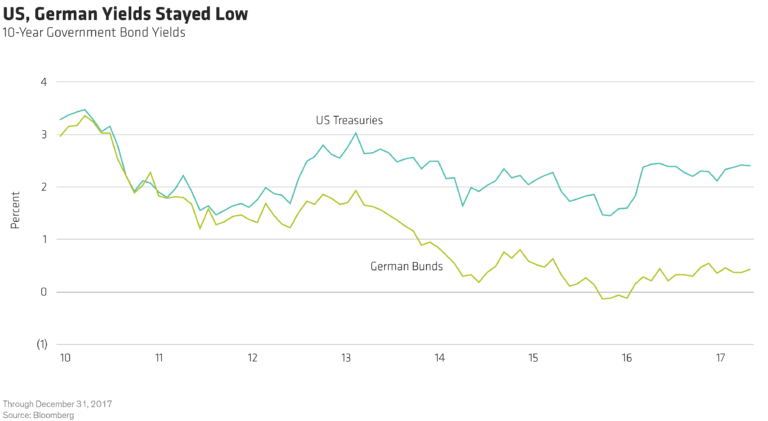 2017 was supposed to be the year that would put an end to modest growth, lukewarm inflation and anemic bond yields. It didn’t live up to the hype. But pressures are building, and that means volatility ahead—as well as opportunity.

Global growth and US growth were solid last year, so the Federal Reserve continued to slowly drain liquidity from the system. The world’s most influential central bank raised official interest rates and began the long process of reversing quantitative easing (QE), which had poured trillions of dollars’ worth of liquidity into the markets after the 2008 global financial crisis.

But counter to expectations and the Fed’s intention, bond yields remained stubbornly low (Display). In the US, long-term Treasury yields fell while shorter-dated ones rose, causing the yield curve to flatten. Prices on equities and high-yield bonds continued to rise, and US and European investment-grade credit spreads tightened as well. Overall, financial conditions were even easier by the end of the year than they had been at the start.

Is the US Economy Heading for a Time Out?

While some investors are concerned about the Fed not making any headway, others have the opposite concern. They’re worried about the flat shape of the US yield curve. That’s because, historically, a flat yield curve has signaled a potential deceleration in economic growth. Could a recession be imminent?

We don’t think it’s time to worry about a looming recession just yet. The curve is still considerably steeper today than it was in the run-up to previous recessions (Display).

So why is the US yield curve so flat? We think it has to do with global QE. In other words, we’re seeing the Fed’s modest tightening activities being offset by the easing still in place by the European Central Bank (ECB) and the Bank of Japan (BOJ).

These central banks are still buying bonds and other financial assets, effectively putting pressure on long-term interest rates—including those in the US. What’s more, there’s still a tremendous amount of liquidity in the US financial system, and it will take time for the Fed to drain it.

Tighter Conditions Ahead—and This Time We Mean It

Over the near term, yields and inflation may remain low and the US curve relatively flat. But with the US economy operating at full capacity, the Fed isn’t going to tolerate these easy conditions for very long. They’ve planned three rate hikes for 2018.

We actually expect them to hike four times to counter global pressures and tap the brakes on the US engine more firmly. Could it take more hikes? Possibly, if the recently passed changes in US tax policy cause growth and inflation to accelerate more than expected. As of now, the Fed does expect growth to increase, but their inflation forecast hasn’t changed after the passing of the GOP tax plan.

At some point, other major central banks will also begin to shift from easing to tightening, which will remove some of these headwinds for the Fed. The reduction of monetary accommodation around the world should play out gradually, however, because central banks move at different speeds.

The next in line is the ECB. With euro-area growth improving, we expect the central bank to finish tapering its monthly bond purchases in the second half of the year and to begin raising official rates in 2019.

And in the not-anytime-soon category: The BOJ is likely to maintain its policy of capping long-term bond yields, since core inflation remains well below target, despite improving growth. And China’s policymakers will focus on the quality of growth and on reining in excessive leverage, especially in the shadow banking system.

The currency markets will also be an important factor in 2018. The dollar was unusually weak last year, given the opposing monetary directions of the Fed relative to the ECB and BOJ. The weak dollar helped global asset prices in 2017; a change in direction in 2018 might alter that outcome.

How to Behave in the Post-QE Era

With central banks normalizing monetary policy, some investors are tempted to put all their eggs in the credit basket. But corporate bond valuations are stretched, and the US corporate credit cycle is in its late stages, so investors should probably think twice about that. Should bond investors sit on the sidelines instead?

Not at all. By diversifying across multiple sources of income and being very selective, it’s possible to ride out waves of volatility without taking on undue risk. Here’s how:

Invest in a barbell strategy if you’re an investor who wants to maintain a lower risk profile. This approach balances interest-rate risk and credit risk and alters the weightings as valuations and conditions change, continually adjusting the balance as needed. As rates rise, a barbell strategy includes US Treasuries and other government bonds, which provide important diversification to credit exposure no matter the environment.

Over the medium term, more than 90% of US Treasury returns come from the yield. This means that rising rates can dramatically boost income for investors who are not primarily focused on short-term price fluctuations.

What’s more, higher rates will eventually slow growth and put an end to the credit cycle. In these periods, investors can rebalance their portfolios by selling US Treasuries and buying credit assets at discount prices.

Diversify your high-income portfolio, and be selective. When yields are low, valuations are high and dispersion is on the rise, it’s more important than ever to exercise caution. Investors should resist the urge to reach for yield and instead concentrate on maximizing opportunity and reducing risk. A global, multi-sector strategy can provide access to multiple sources of income and return.

US high yield is in the later stages of the credit cycle. That means investors should be choosy about what they buy. But they shouldn’t avoid this market altogether. High-yield bonds are less sensitive to interest rates than other bonds are. And their steady income can enhance total portfolio returns even as rates rise.

What not to do? Don’t replace your high-income strategy with a portfolio of leveraged bank loans in the hopes that bank loans will protect you against rising rates. Bank loans have failed to meet those expectations.

Allocate to emerging-market debt (EMD). EM bonds delivered strong returns last year. We think the sector has more potential, thanks to improving economic fundamentals, stable or falling inflation, and critical reforms among EM countries—reforms that have reduced their vulnerability to external shocks.

With global economic and geopolitical risks rising, however, investors will have to exercise caution. Fortunately, political risk tends to be country specific. This means investors can limit the volatility that any single country’s political risks might generate by being selective and by diversifying across EM countries.

Indeed, EMD has evolved so much over the past decade that it is now itself a global, multi-sector opportunity set offering the ability to diversify by country, credit and currency. Many developing countries have, in a sense, already emerged and are essential engines of global growth. In our view, a fixed-income portfolio today would be incomplete without them.

Signs point to 2018 as an important transition year for markets. For nearly ten years following the unfolding of the global financial crisis in 2008 and the subsequent Great Recession, monetary policy has been extremely stimulative. That era has come to an end.

While this change in monetary policy may not be terribly important to global economic growth, we do believe that it could have an impact on asset prices. It will certainly help drive volatility of those asset prices up from the abnormally low levels of 2017.

Investors who are prepared to seize the opportunities and navigate the challenges ahead will find the transition phase easier.