ValueWalk
Home Technology Getting from A to B like Harry Potter 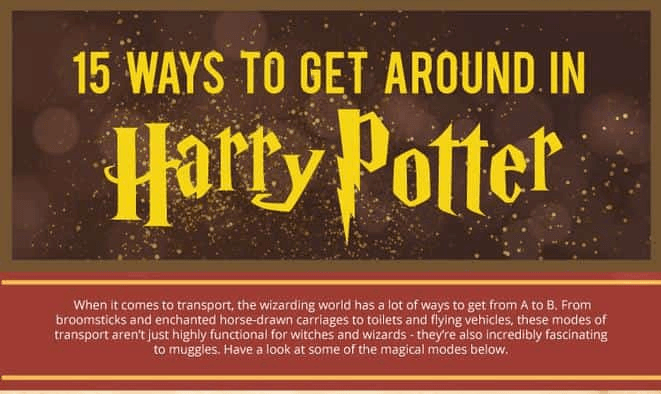 If you’ve been sat on a long bus journey or found yourself tapping the steering wheel during a five-mile tailback on the motorway, you may have pondered all the different ways you could be traveling to work.

Wouldn’t it be great if you could just click your fingers and change location spontaneously? Think how much time we’d get back! No more delays at the airport check-in, no more rushing to the station to catch the train.

Well, if you live in Harry Potter’s world, and have the magical skills, there’s a whole bunch of ways to get from one place to the next.

Here are some of OSV’s favorites:

Broomsticks and Flying Carpets:
When we think of witches, most of us imagine an old crone flying across the moon on a broomstick. They’re found in Harry Potter, as you might expect, but their use is strictly controlled. Still, it’s better than driving to work in a car – though you might remember to wear your thermals.

Of course, there’s also the ubiquitous flying carpet although these still seem to be banned in the UK, apparently because they’re ‘Muggle objects’.

Dragons:
If you’re going to be flying through the air at high speed, why wouldn’t you want to be sat on a dragon? If you don’t mind the imminent danger of being burned alive by those fiery nostrils and a certain lack of direction on the dragon’s part, it’s an exhilarating way to travel in Harry Potter’s world.

Thestrals:
Winged ghostly horses that know exactly where you want to go sound much better than fiery dragons. The Thestral just needs you to say your desired location and it’s off. A little on the ghostly side but a far more comfortable and reliable ride if you’re in a hurry.

These are a little more obscure and difficult to find in Harry Potter’s world. Essentially you need two appropriate cabinets, one in each location, for it to work. Step in the first cabinet and you’re instantly transferred to the second. Get it wrong and you could end up anywhere.

Portkeys:
Apparently, you can turn any inanimate object into what is called a portkey. You must possess the right wizardly powers, of course, but it’s a spell that can be used anywhere and provide an instant portal to any location you like.

Apparition:
Just being able to think yourself into another place would be really useful. In Harry Potter, wizards and witches with the necessary training simply have to focus on where they want to be and next thing you know they’ve teleported to their destination. Think how much this could save you on holiday travel!

The Knight Bus:
If you don’t mind a rough ride that can turn your stomach a little queasy, this triple-decker bus can be instantly ordered if you stick out your wand. It’s not just any old bus either, there are all the comforts of home including beds and candlesticks.

Flying Cars:
There’s not too many people who’ve been stuck in a traffic jam who didn’t wish they could get their car to fly. For some reason, in Harry Potter, vehicles need to be customised to perform this service, which generally involves using the magic of some kind.

The Hogwarts Express:
Finally, while it has limitations, jumping aboard the Hogwarts Express is many people’s dream travel experience. Operating between Kings Cross Station and Hogsmeade, it only makes the journey six times a year. So book your ticket early. And be prepared to learn some interesting magic.