Despite the recent news that the Galaxy S9 and S9+ are confirmed to be revealed on February 25th, the world is still speculating what we might see from these upcoming phones. Recently leaked renders suggest several Galaxy S9 colors, which gives us another piece of the puzzle.

With the Galaxy S9 and S9+ set to be revealed the day before the Mobile World Congress launches in Barcelona, Spain, it won’t be too long before we have a full picture of what we can look forward to with these upcoming phones. For quite some time, there have been a series of leaks and rumors which give us more insight into the phone, but the reliability of this information has been called into question.

This most recent leak, discovered by GSMArena, comes from the phone case manufacturer Poetic, and gives us a look at the Galaxy S9 colors we may see at the launch of Samsung’s upcoming flagships.

The new renders published by Poetic show that the Galaxy S9 colors will include at least two familiar colors – Grey and Orchid Silver. Considering the fact that the current S8 lineup has the colors Orchid Gray, Arctic Silver, and Midnight Black, we’re wondering if some lines got crossed when it came to naming the colors. Either way, it looks as if we’ll see some sort of grey and silver making up part of the Galaxy S9 colors during launch. 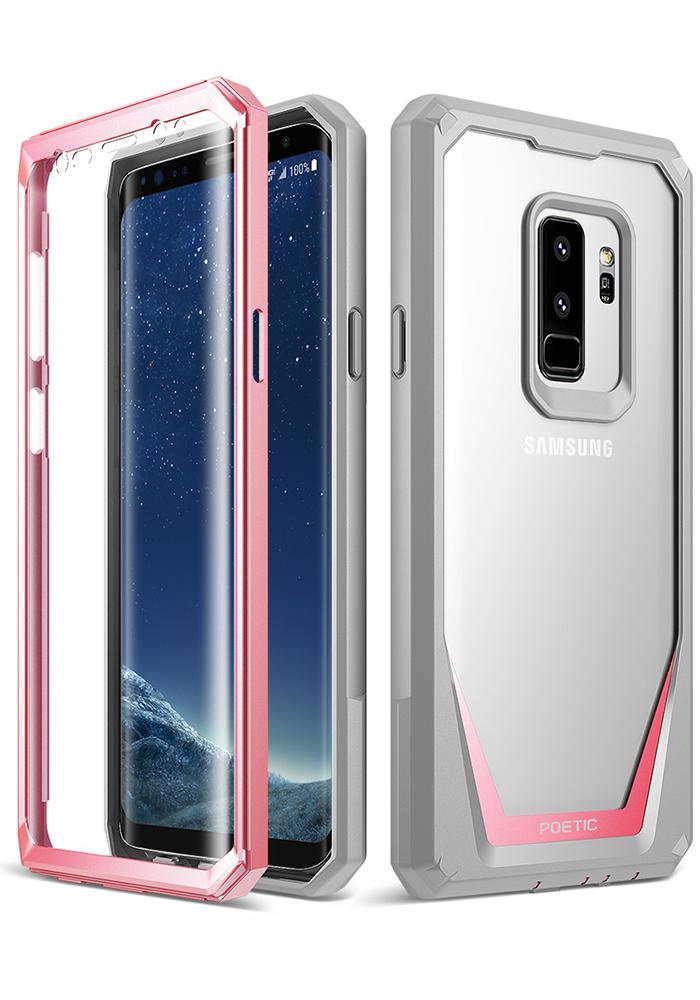 As far as what we know about the Galaxy S9 so far, it appears as if the phones will be largely similar to their predecessors – at least in terms of design. The back will feature a different setup for the camera and sensors, with the fingerprint scanner now located in the middle of the phone rather than awkwardly placed to the side. This is a big improvement over the current generation, but having the sensor on the back of the phone is still hard to get used to for many users. There have been some rumors that Samsung is working on fingerprint scanner technology that could be included underneath the display itself, but it’s not likely we’ll see that technology implemented in the phones being announced on the 25th. The S9+ will feature a dual-lens camera, while the regular S9 will only have a single lens – just as it is with this current generation.

The Need To Innovate

With the Galaxy S9 colors, as well as with the phone overall, it appears as if Samsung is sticking to what they’ve done before. This isn’t necessarily a bad thing, as the company has seen great successes with all of their recent flagships outside of the Galaxy Note 7 fiasco, but they are also falling behind competitors like Apple when it comes to innovation.

While there’s some news and patent filings regarding a potential foldable Galaxy smartphone, right now Samsung doesn’t seem to be doing much to set themselves apart from the crowd other than offering an iterative upgrade with minor design tweaks and more power. While they’ve certainly arrived at a formula that works for them, Apple has shown with the iPhone X that innovation can definitely pay off. While sales have since tapered off for the tech giant, the iPhone X’s innovative Face ID technology took the market by storm and led to some serious sales numbers of the holiday season that had Apple at the forefront of everyone’s mind.
The news on the Galaxy S9 colors is welcome because it lets us know what we have to look forward to, but unless there’s something different about the phones at launch it may be difficult to convince current S8 owners to make the upgrade. With how expensive smartphones have become, making a yearly upgrade just isn’t feasible for the majority of users. With Apple’s iPhone X, they offered something clearly different from the previous generation that offered a new experience in addition to updated specs. If Samsung wants to accomplish the same, they may be best suited by following suit.

Until the day before the Mobile World Congress, we won’t know too much more about what we can expect for Galaxy S9 colors – or from the rest of the phone that matter. However, from the leaks we’ve seen thus far, we shouldn’t expect too severe of a departure from the tried and tested S formula. While the Galaxy S9 colors don’t necessarily need to include anything wild in order to be exciting, it would be nice to see an option that shakes up the current lineup at least a little bit. It remains to be seen whether the Galaxy S9 and S9+ will offer something novel enough to both attract new customers and warrant the upgrade for current Galaxy users.