As 2018 begins, it is the ideal time to make a Galaxy Note 8 vs iPhone X comparison, with the two smartphones having been the outstanding devices of 2017. Apple’s iPhone X was incredibly well-received, but Samsung’s Galaxy Note 8 also merits serious consideration. But how do they stack up against one another?

In common with the size of the two devices, the iPhone X is preferable here, weighing over 10 percent less than the Galaxy Note 8. Weighing in at 195 grammes, the Galaxy Note 8 is 21grammes heavier than Apple’s iPhone X. However, both the weight and size disparity between the two devices can be explained by the next category of comparison.

Screen resolution is also particularly important in the smartphone niche, and Apple has at least made an effort to close the gap with Samsung when it released the iPhone X. The Quad HD resolution of the iPhone X is certainly welcome, and the display quality of the smartphone has been generally commended.

However, the 1,440 x 2,960 pixels of the Galaxy Note 8 not only supersedes that of the iPhone X, but also delivers a superior pixel density. So although the Apple iPhone screen can be considered an excellent smartphone, it is still inferior to the Samsung offering. 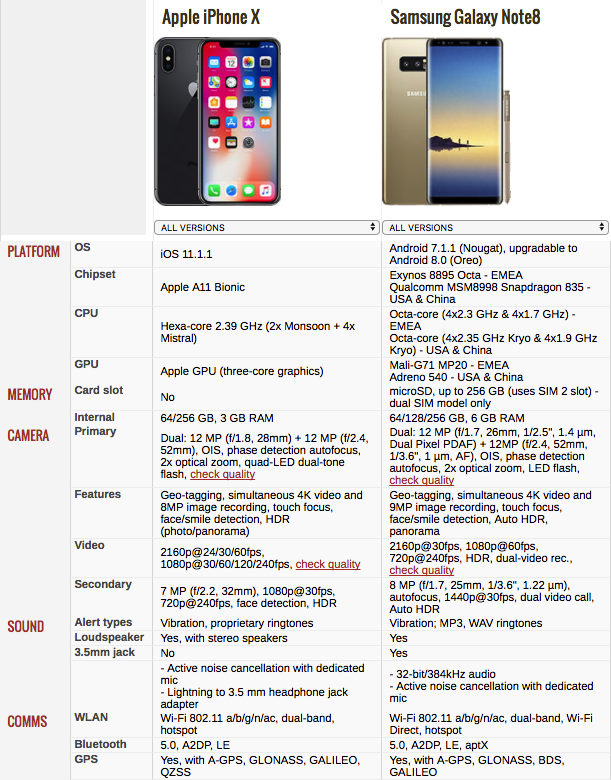 The processing capabilities of the two devices is obviously of critical importance, and thus this is a key area of comparison between the two smartphones. The Galaxy Note 8 probably has a slight edge here, considering the octa-core processor that is included in the device. However, the combination of propriety hardware and software that Apple delivers means that the performance of the iPhone X is more than competitive.

Apple has always relied on its combination of self-constructed hardware and software in order to deliver outstanding performance, and it is therefore not a surprise that the Galaxy Note 8 features significantly more RAM memory. The 6GB of the Galaxy Note 8 is double the 3GB that Apple has chosen to include in the iPhone X. Although this hasn’t hampered the performance of the Apple device, it would be beneficial for Apple to increase the RAM memory included in the iPhone X sequel.

Storage is becoming ever more important in a media climate that features larger files sizes, so it was a smart move of Samsung to deliver more storage options in the Galaxy Note 8 generation. In fact, the 64, 128 and 256 GB versions of the Galaxy Note 8 means that Samsung consumers in fact have more choices than iPhone X buyers this time around.

Photography is a critical aspect of the Galaxy Note 8 vs iPhone X comparison, so let’s begin by looking at the specifications of the two smartphone snappers.

There isn’t too much to choose between the specifications of the two devices, but the iPhone X camera has performed particularly well in testing. The consensus of opinion is that The iPhone X snapper is the best available on the market, delivering a clarity of image and realistic color reproduction that is unmatched, even by the excellent camera included in the Galaxy Note 8. 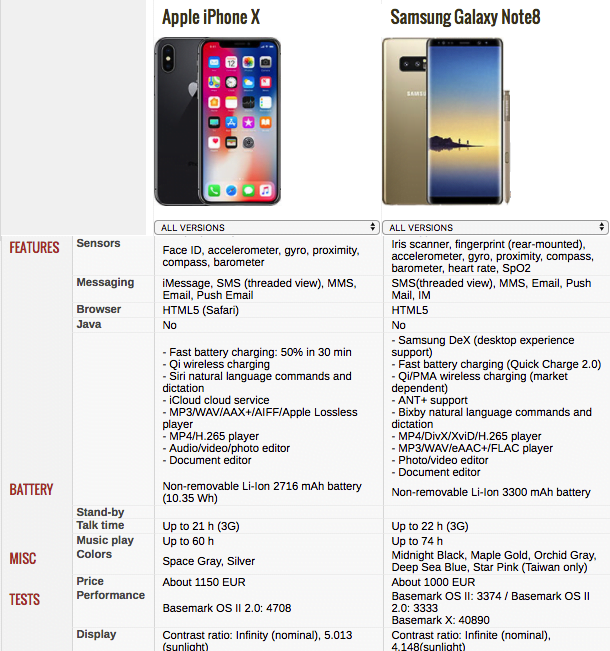 Apple devices have been criticized for some time for failing to deliver what is perceived to be adequate battery life, and this hasn’t entirely changed with the iPhone X. Certainly Apple has addressed the situation to some extent, but the Galaxy Note 8 still features a much larger battery cell than the iPhone X. The non-removable Li-Ion 3300 mAh cell of the Galaxy Note 8 means that its lifecycle can be considered superior to that of the iPhone X, and this is another area that Apple should address in 2018.

Pricing is an absolutely key aspect of the Galaxy Note 8 vs iPhone X comparison, and, to be honest, both smartphones are rather pricey. Both touched the $1,000 price point, although the Galaxy Note 8 is marginally more affordable at $949. The iPhone X price tag certainly raised a a few eyebrows when it was first set at $999, but the device still sold well at this lofty recommended retail price.

The Galaxy Note 8 vs iPhone X battle is probably the key comparison anywhere in the industry, and both devices have their own particular merits. The Apple smartphone delivers a compact package, with unequalled design, slick operation, and a street cred that cannot be matched. The Galaxy Note 8 is the larger and more spec-packed device, but Apple has outmanoeuvered Samsung in some key areas with the iPhone X.

With both devices being priced in the same ballpark, whether you opt for the Galaxy Note 8 or iPhone X will be dependent on which particular features you value most.