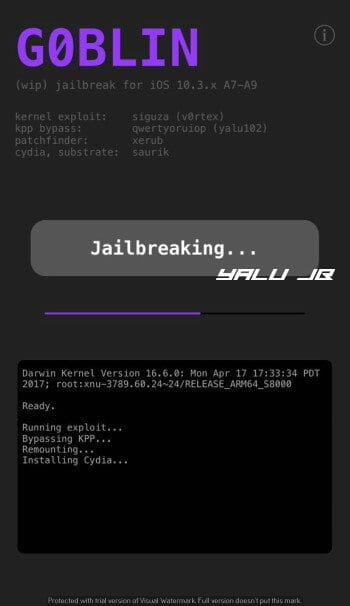 With security becoming tighter and demand lowering for an iPhone and iPad jailbreak, progress on the project for modern operating systems has been slow. However, the past few weeks have ushered in a huge amount of progress towards a crack of both iOS 10 and iOS 11. Adding another utility to the pile, the G0blin iOS 10.3.3 jailbreak has been developed and released – currently intended primarily for developers.

With how many jailbreaks that have been released and the massive amount of progress made in just a short amount of time, it can be easy to get a little lost in the specifics of who’s doing what and which utilities are released. If you’re a jailbreak user, chances are that you’re at least a little bit tech savvy. But even for those of us who are comfortable installing a normal crack, the G0blin iOS 10.3.3 jailbreak may still be a little out of reach. The jailbreak, released by “iOS developer” Slicktron, is intended for those who are comfortable compiling IPA themselves using Xcode before installing it on their device.

For the uninitiated, Cydia is one of the most popular alternative launchers for iPhone, and has long been a significant part of the iOS jailbreaking scene. The Fact that the G0blin iOS 10.3.3 jailbreak includes support for both Cydia and Substrate seems to suggest that the release may be more fully featured at some point when compared to the previous two launches.

The more people that are working on an iPhone jailbreak the better, and there’s always room for improvement. With more useful utilities that feed off of the work of one another, the collaborative iOS jailbreaking community can work together to develop cracks for a phone that is notoriously locked down. For those who believe that users should have unrestricted access to their phones, this progress in the jailbreaking scene has been a godsend – and as of right now, it shows no sign of slowing down.

Unless you’re a developer, we recommend waiting a while on installing the G0blin iOS 10.3.3 jailbreak. Still, a modern jailbreak that isn’t currently reliant on a yet-unreleased update to Cydia is a major addition to the jailbreaking scene. We can’t wait to get our hands on the finished release.