In our third quarter 2017 letter, we wrote extensively about changes to FPA Capital Fund’s portfolio’s management structure following weak results in two out of the last three years. In that letter, we listed the steps we were taking to ensure we were doing more of the right things and fewer of the wrong things. In summary, we pledged to:

3.Differentiate between long-term and opportunistic investments

We have already started to increase the quality of the portfolio, and we have implemented many changes. To put these changes into perspective, over the past seven years, we initiated four positions a year on average. In the four months since the announcement we did the following:

3.For the 17 remaining positions:

a.Increased our weighting by more than 100bps for seven positions

b.Decreased our weighting by more than 100bps for three positions

You should expect further changes as time goes on. 2017 was one of the worst years in the FPA Capital Fund’s history, as the Fund was down 5.11%. Let us briefly recap why we should still have the privilege of managing your capital.

Why Invest With The FPA Capital Fund?

The FPA Capital Fund is, and has always been, a highly differentiated product. Our historical outperformance is a direct result of our ability to position ourselves differently than the competition. As a reminder, here are a few of the key elements that we believe separate us from the pack:

Our portfolio remains highly differentiated today, but we believe there is safety in solitude. Currently, almost 60% of the portfolio is invested in energy-related companies and cash. This compares to less than 5% in energy and 0% in cash for the Russell 2500.5 The rest of this letter will answer the following two questions:

1.Why do we have such a large exposure to energy?

2.Why is our cash level so high today?

Why Do We Have Such A Large Exposure To Energy?

We believe we are in the early stages of another historic multi-year oil bull market. This represents a highly contrarian call, with most market watchers underappreciating or flat-out rejecting the prospects for a rally in oil prices despite an ongoing drawdown of global crude inventories. 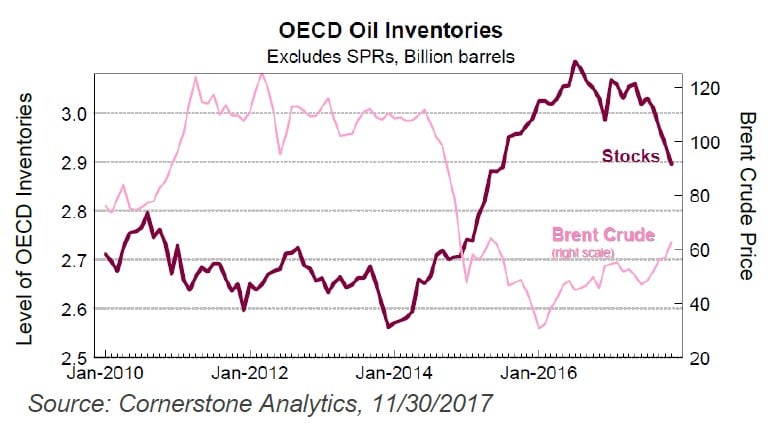 Our energy investment is not just tied to our belief that oil prices will go higher, however. We also see that extreme investor bearishness, and perhaps apathy, have caused oil-related equity performance to disconnect from crude oil commodity performance.

The Road to Lower Inventories and Higher Prices 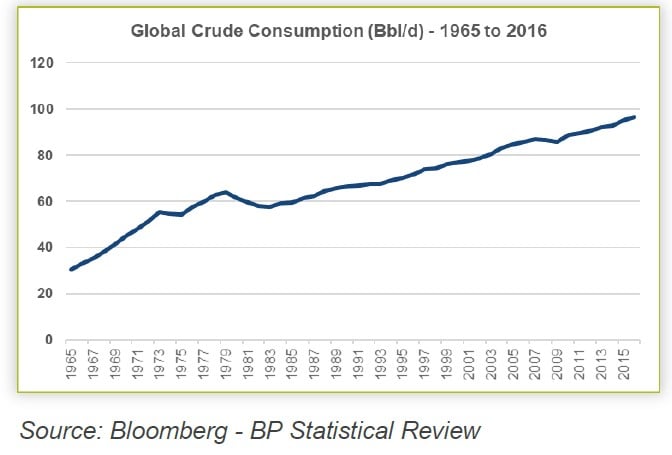 Bears will often cite the following:

Bear Argument #2: OPEC and its partners, including Russia, will ramp up supply growth.

Actions taken since November 2016 (including a recent decision to extend the 1.8 million barrels per day (bbl/d) cut through the end of 2018) and quota compliance data don’t back up this argument.

For the House of Saud, the most obvious incentive to keep oil supplies tight stems from budgetary constraints. The country needs over $70 oil just to neutralize its fiscal deficit and stop the ongoing bleed of foreign currency reserves.

Meanwhile, in the Kremlin, we must assume that Vladimir Putin had his 2018 re-election campaign in mind when he endorsed the 2018 quota extension. Russia’s economy is substantially dependent on crude oil, with 70% of Russian exports related to the oil and gas sector.