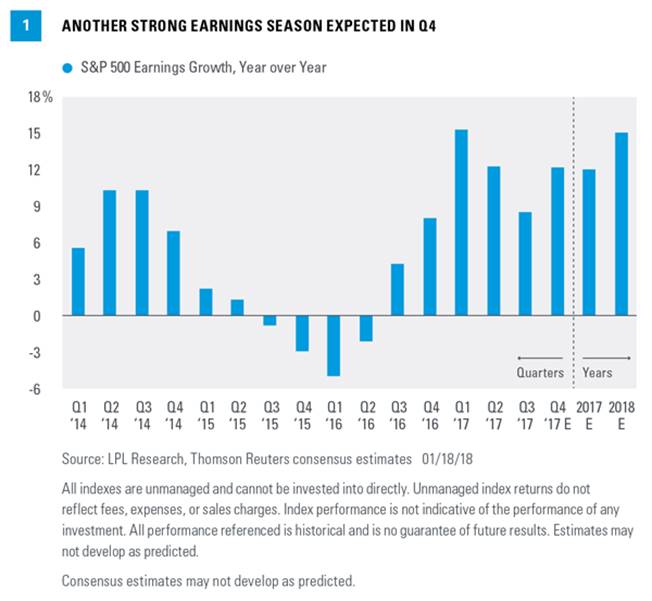 It’s early in the season, but with about 50 companies having reported fourth quarter results, S&P 500 Index earnings are tracking a 12% year-over-year increase [Figure 1]. A solid 79% of the companies have bested earnings estimates, while 87% have topped revenue targets, both well above recent and long-term averages. In this week’s commentary, we preview fourth quarter earnings season and reiterate our optimism for corporate profits in 2018.

The S&P 500 has exceeded quarterly earnings expectations for 34 straight quarters and we see no reason why the fourth quarter of 2017 won’t make it 35. We believe an increase in the 14–16% range may be achievable, based on a 3–4% average upside to estimates historically. Though earnings growth may be driven mostly by technology and energy, growth is expected to be broad based, with a reasonable chance that all 11 sectors will report growth in earnings when all results are in [Figure 2]. Even excluding the sharp rebound in energy sector profits, and despite tougher comparisons against improving late-2016 earnings, a double-digit gain in S&P 500 earnings appears likely. 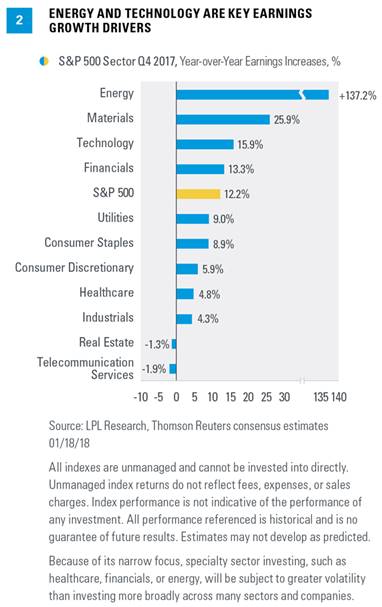 Here are the six primary reasons why we expect another good earnings season this quarter, relative to expectations: 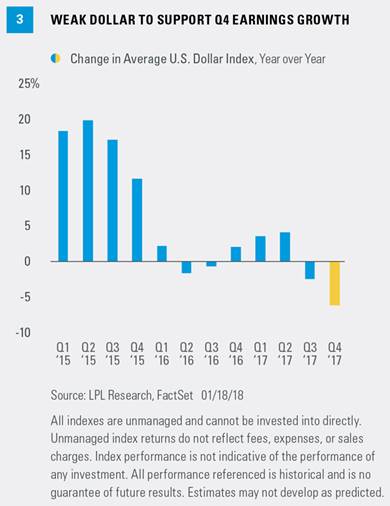 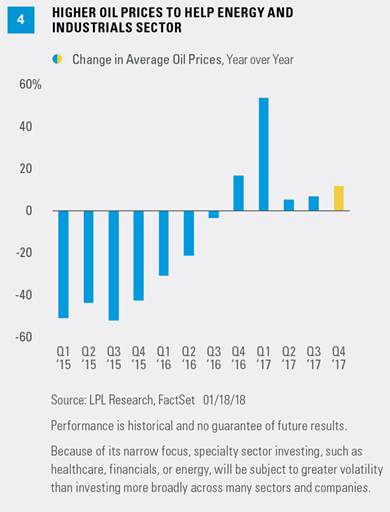 We believe these six factors will be the biggest drivers of potential earnings upside this earnings season. However, there is also a potential lift from hurricane-related rebuilding efforts, a positive, following the weather-related earnings drag in the third quarter, mostly from insurance losses.

And though not a clear negative, write downs related to the new tax law, particularly in the financials sector, have been garnering a lot of attention. We expect the market to look past these tax hits and focus on the benefits of the lower corporate rate, but the headlines aren’t helping investor sentiment. A lower tax rate leads to reductions in the value of future tax assets, and taxes paid up front for repatriating overseas cash, are both in the “pay now, benefit later” category. 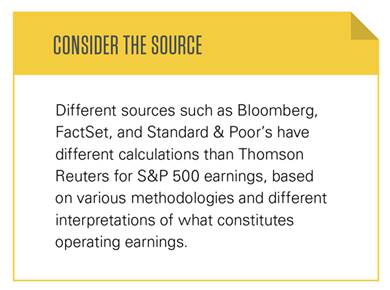 With the passage of the new tax law in late December, we upgraded our forecasts for earnings in 2018 (as well as our economic growth and S&P 500 return forecasts). Specifically, the new tax law and the potential boost to corporate profitability led us to raise our 2018 S&P 500 earnings forecast from $142.50 to $147.50, representing annual growth in the 12–13% range, which may prove conservative.

As noted in our Outlook 2018: Return of the Business Cycle, we believe 2018 earnings will be supported by stronger global economic growth, a pickup in business spending, and strong manufacturing activity in the United States. We also think operating margins will remain strong and stable, thanks to our expectation for only modest upward pressure on wages and other input costs. The increase in 2018 estimates, even if largely due to analysts factoring in the new tax law, is encouraging as 2018 begins.

We expect a strong fourth quarter earnings season and a mid-teens increase in S&P 500 earnings. Looking ahead, we believe our forecast for low teens earnings growth in 2018 is well supported by our forecast for accelerating global economic growth and the new tax law. Although we may see a pickup in volatility in the near term, we believe our earnings expectations for 2018 support further gains for stocks over the balance of this year.