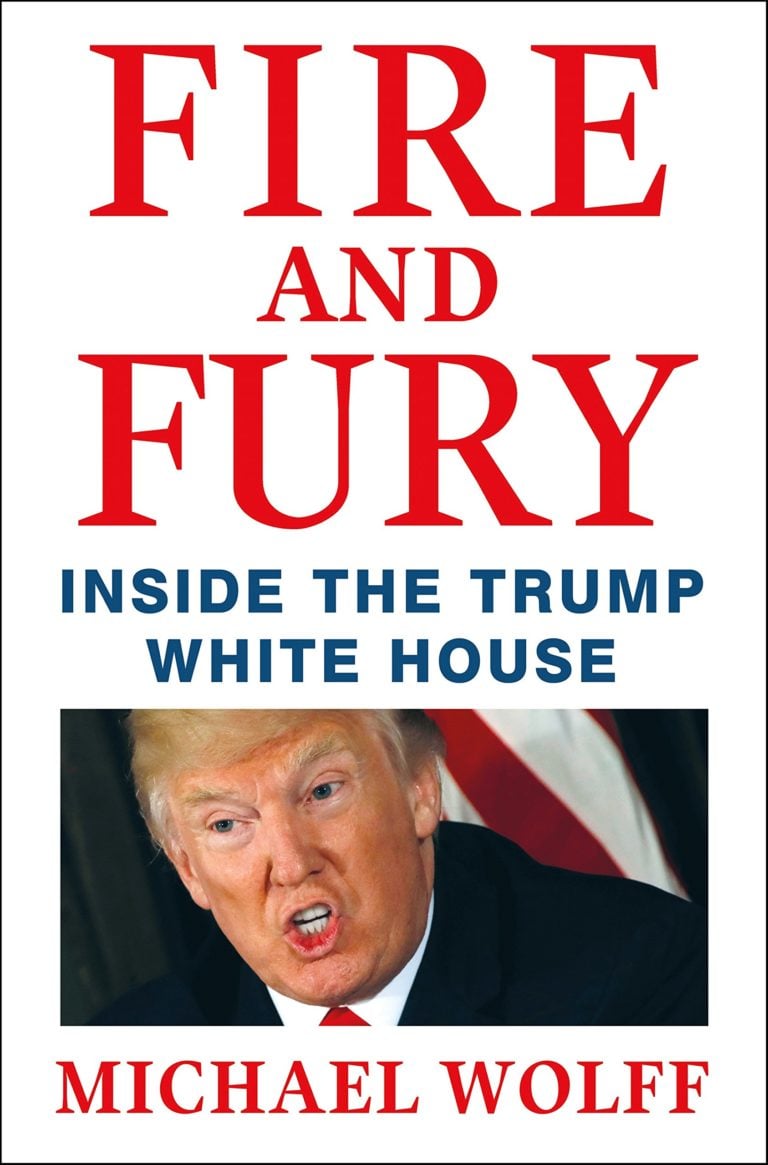 Michael Wolff’s long-anticipated and controversial new Trump book “Fire and Fury: Inside the Trump White House,” has gone on sale in the U.S., turning both the media and the White House upside down.

According to the latest report from The Telegraph, people were queuing up in bookstores across Washington DC, even waiting in line throughout the night to get their hands on a copy of the book. “Fire and Fury” paints a rather derogatory portrait of the U.S. president and his family, with the author describing him as an “undisciplined man-child” who didn’t actually want to win the presidency.

With lots of authorized and unauthorized excerpts from the book now circulating the media, it seems that the new Trump book is every bit as audacious and entrancing as advertised. Michael Wolff’s behind-the-scenes account of Trump’s election campaign reveals unflattering and unprofessional behavior by the then president-elect Trump, chaotic and disloyal interactions among the senior staff at the White House, as well as ambitious intentions for the future that the first daughter, Ivanka Trump, has in plan.

Not one to hold onto juicy leaks, Mr. Wolff included multiple defamatory revelations about the Trump family made by former White House Chief Strategist and Trump’s former ally Steve Bannon.

Fire and Fury, published by Henry Holt and Company, one of the oldest publishers in the U.S., paints a picture of how some of the most powerful men and women in Washington worked together to help Trump win the presidency. Seemingly full of unexpected twists and turns, the Trump book also details how the same Washington officials turned on one another after Trump took the oath.

The explosive success Michael Wolff’s Trump book has received in the first few hours of its release is a clear reminder that credibility isn’t crucial for sales. Despite being a very accomplished journalist, Wolff has acquired quite a reputation in his four-decade-long career.

According to NBC, Wolff has already been accused in the past of suspect reporting, most notably in his 1998 book “Burn Rate: How I Survived The Gold Rush Years on the Internet.” Following the release of the book, the now-defunct media journal Brill’s Content published a review, citing more than a dozen people depicted in the book as saying that Wolff either invented or altered quotations published in “Burn Rate.” The review also stated that many of the people depicted and mentioned in the book said that Wolff did not take notes or record their interviews.

Taking all that into consideration, saying that sensationalism was the aim of “Burn Rate” doesn’t seem so far off.

However, it seems that the reputation Wolff had acquired did very little to slow down the “Fire and Fury’s” sales. The White House denouncing the book also didn’t manage to affect the media frenzy that surrounds Wolff’s latest publication.

The Globe and Mail reported that President Trump’s lawyers have sent a cease-and-desist letter to Mr. Wolff and his publishers earlier on Thursday. The letter demanded the book not to be printed and that Mr. Wolff retracted all of its reporting.

Henry Holt and Company, the publishers of the new Trump book, responded by announcing it would instead move up the book’s publication date from next week to Friday to capitalize on runaway demand, The Globe reported. The media frenzy surrounding the book caused an incredible amount of pre-orders to be filled, pushing “Fire and Fury” to the top of Amazon’s best seller list.

The White House responded to the book’s portrayal of Mr. Trump, with White House press secretary Sarah Huckabee Sanders telling reporters that President Trump is “an incredibly strong and good” leader. “It’s disgraceful and laughable. If he was unfit, he probably wouldn’t be sitting there,” she told reporters in the daily press briefing.

Trump responded to Wolff’s depiction of him in the book by tweeting that he “authorized Zero access to White House” for the author and “never spoke to him for book.”

What god everybody so riled up

After The Guardian revealed Wednesday that Steve Bannon, President Trump’s ex-chief strategist, had described a meeting between Donald Trump Jr. and a Kremlin operative as “treasonous” in an interview with Mr. Wolff, Bannon was quickly disowned by the President and faced ouster from Breitbart news.

According to a lengthy extract published by the New York Magazine, Mr. Bannon’s outspokenness was just the beginning of the tensions and turmoils that plagued the White House.

1.Trump was convinced he would lose

Mr. Trump, along with almost everybody in his circle, including his family, never actually believed that he would become President. Refusing to accept a $5-million donation from billionaire financier Robert Mercer, Trump said he was “baffled” that he would want to donate to a losing campaign.

In “Fire and Fury,” Mr. Wolff describes Trump’s surprise after he had won the election, saying that he “looked as if he had seen a ghost.” According to Mr. Wolff, Melania Trump, the President’s wife, cried in despair as she received the news of Trump’s victory.

2.Flynn was warned about working with Russians

According to NBC News, Fire and Fury suggests that Michael Flynn, Trump’s former National Security Advisor who last month pleaded guilty to making false statements to the FBI, was warned about accepting money from Russia for a December 2015 speech in Moscow.

Wolff wrote that Flynn was informed that taking a $45,000 speaking fee from the Russians was a “bad idea,” and that he was briefed on the possible repercussions of his Moscow speech. However, according to Wolff, Flynn remained unconcerned about the warnings, responding that “it would only be a problem if we won.”

3.Jared and Ivanka were not fans of Comey

Wolff’s Trump book suggested that Jared Kushner and Ivanka Trump were convinced that James Comey, former Director of the FBI, will go after the Kushner family’s real estate dealings. Jared’s father, Charles Kushner, was convicted of illegal campaign contributions, tax evasion, and witness tampering during his time as the head of Kushner Companies, and had served time in federal prison.

Fearing a probe into the family’s business, both Jared and Ivanka encouraged the president to fire Comey. According to NBC News, the book also says that the Trump family believed that Comey wanted to increase his power by damaging them.

Despite the fact that firing James Comey quickly led to the appointment of Robert Mueller as special counsel in the federal Russia probe, Trump was initially very pleased with his decision.

According to Fire and Fury, the president thought that ousting Comey would show the American people that he could stand up to the FBI.

5.Rudy Guiliani was supposed to sit in Neil Gorsuch’s chair

Wolff suggests that despite Trump frequently pointing to his appointment of Neil Gorsuch to the Supreme Court as being one of his signature achievements, Gorsuch wasn’t actually his first pick for the seat.

Saying that Trump actually wanted a loyalist on the bench, Wolff wrote that Trump was actually considering Rudolph Giuliani, former mayor of New York City, for the position of Associate Justice of the Supreme Court.

As reported by NBC News, Trump “kept returning” to Giuliani because the former New York City mayor and avid Trump campaign supporter had backed him up after the “Access Hollywood” tape fiasco.

6.Steve Bannon doesn’t take Trump seriously. But neither does anyone else

Fire and Fury describes a January 2016 conversation between former Fox News boss Roger Ailes and Steve Bannon, citing Mr. Bannon as saying that Trump was “merely a large and peculiar presence to both be thankful for and to have to abide.” When Ailes said that Mr. Trump might be “Nixon in China,” Mr. Bannon replied “Bannon in China.”

Fire and Fury also quotes Bannon as saying that Trump is more likely to resign or to get impeached than stay President by January 2021. According to the book, Mr. Bannon is organizing his own presidential campaign in 2020. “He’s not going to make it,” Mr. Bannon told Mr. Wolff, according to the Daily Beast. “He’s lost his stuff.”

According to the Globe, a consistent theme in all the Fire and Fury excerpts is the irritation of everyone who deals with Mr. Trump at his inability to read, process information or even have a conversation.

7.Ivanka Trump wants to be the first woman president

In Fire and Fury, Mr. Wolff says that Ivanka and Jared Kushner ignored “the advice of almost everyone they knew” to take up positions in the White House. “Between themselves, the two had made an earnest deal: If sometime in the future the opportunity arose, she’d be the one to run for president. The first woman president, Ivanka entertained, would not be Hillary Clinton; it would be Ivanka Trump,” he writes.