Societies have been through revolutions thanks to energy evolutions, that’s one of the key takeaways from a new energy report written by Stephen King. HSBC’ s Senior Economic Adviser.

Mr. King argues that since Roman times, humans have been held back by energy limitations and new energy discoveries have helped drive enormous changes in societies as they’ve been developed. This, he argues, is precisely what we see today with the development of the electric car. The development of electric vehicles will result in a drastic way energy is produced, stored and transported, factors that are already having an impact on society.

Before the fossil fuel revolution, most cities were heavily constrained in size by the limited availability of a local fuel source according to Mr. King's report. Until the industrial revolution in the mid-19th Century, only a handful of cities managed to sustain over one million residents, but this all changed thanks to the arrival of the steam locomotive. Steam replaced the horse-drawn carriage and sail allowing more resources to be transported to their destination faster and at a lower cost sustaining city life.

Following steam, the internal combustion engine revolutionized city life. Mr. King points out in his report that before the First World War, for example, the UK was home to over 2 million horses (serving 40 million people), half of which were employed in agriculture. "Today, the UK horse population is down to around 950,0006 (alongside 60 million people), with the majority "not gainfully employed."

"In 1911, 2.3 million people were employed in agriculture, fishing and forestry in the UK. A further 1.2 million were employed in mining with an additional 6.1 million in manufacturing. Collectively, these three sectors of the economy accounted for over 50% of UK employment...Altogether, these sectors now account for less than 9% of total employment." 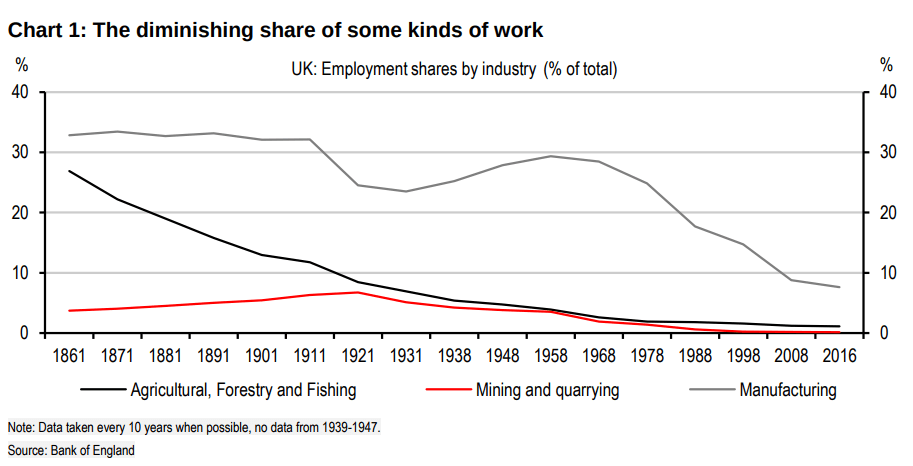 Energy influences how we live and what we can accomplish. Until the arrival of electric trains (and signals) an efficient city subway system was almost impossible (London used steam underground, but this was neither a pleasant nor suitable system).

Mr. King goes on to argue that energy has, also, helped create the world's supply chains as they are today:

"As capital has become more mobile, so manufacturing has increasingly been outsourced to parts of the world with cheaper labor and hence lower production costs. The resulting global supply chains have been created thanks, in part, to the effects of the energy-related advances of the 20th Century (diesel engines to underpin the container shipping revolution, electrical current to support the IT revolution, jet engines to propel the expansion of air freight)."

The electric car revolution could lead to the same dramatic changes. Today, infrastructure is developed for fossil fuels, doing the work needed to upgrade power grids, charging stations, rest stops, and other facilities will drive enormous infrastructure spending. Movie theaters and malls will have to branch out into charging. Meanwhile, gas stations will lose their monopoly and auto shops (thanks to the more reliable electric cars) will have to diversify.

The most prominent change, however, according to Mr. King will likely come from the renewable energy revolution. "If the marginal cost of renewables is effectively zero," he writes, "then we could enjoy seemingly limitless access to energy: there would no additional costs associated with digging coal, fracking oil or pumping gas." This model implies that the "business model for energy would increasingly look like another version of broadband internet or the 19th Century expansion of railways," upfront payment with the marginal cost at or near zero.

The 19th Century expansion of railways, and the adoption of broadband both completely changed the world, and free energy could do the same. When coupled with electric vehicles, consumers will benefit from much lower costs of transport as well as lower costs for goods. Robots in manufacturing will also help lower costs and improve efficiencies.

There are other factors to consider in this scenario, however. For example, what happens to those displaced by the revolution? Who will put up the cost of renewable infrastructure construction and will technology be able to make electric cars appealing (and cheap) enough for all?

As renewable energy booms, it's clear that governments are going to have to rethink fuel taxation. Currently, renewable energy is generally treated favorably around the world with subsidies and incentives offered by governments to suppliers. Policymakers can do this thanks to heavy taxes on fossil fuels. One example, as highlighted by Mr. King in his report, fuel duties in the UK (on transportation) amount to around 1.4% of GDP (or, including VAT, 1.7% of GDP). Meanwhile, fuel used for transportation purposes across the OECD (24% of the energy base) is taxed at €11.5 per gigajoule. In comparison, electricity, which accounts for 42% of the energy ‘base’ across the OECD, is taxed at a remarkably low €0.9 per Gj.