I previously highlighted why Delta Air Lines, Inc. (NYSE:DAL) was a winner among legacy carriers on August 22nd, 2017 when shares were trading at $47.80. The main arguments I highlighted were:

Delta's stock has since increased by nearly 20% so I decided to update my cash flow analysis prior to the company reporting earnings on January 10th. The conservative analysis below details how Delta Air Lines, Inc. (NYSE: DAL) still has another 20% upside.

The basic philosophy behind a DCF analysis is that the intrinsic value of a company is equal to the future cash flows of that company, discounted back to present value. The general formula is provided below. The intrinsic value is considered the actual value or “true value” of an asset based on an individual’s underlying expectations and assumptions.

Cash flows into the firm in the form of revenue as the company sells its products and services, and cash flows out as it pays its cash operating expenses such as salaries or taxes (taxes are part of the definition for cash operating expenses for purposes of defining free cash flow, even though taxes aren’t generally considered a part of operating income). With the leftover cash, the firm will make short-term net investments in working capital (an example would be inventory and receivables) and longer-term investments in property, plant and equipment. The cash that remains is available to pay out to the firm’s investors: bondholders and common shareholders.

I will take you through my own expectations for Delta as well as explain how I arrived at certain assumptions. The full analysis was completed on Tuesday, January 2. An updated analysis using real-time data can be viewed in your web browser at finbox.io's Delta DCF analysis page. The steps involved in the valuation are:

The key assumptions that have the greatest impact on cash flow projections are typically related to growth, profit margin and investments in the business. The analysis starts at the top of the income statement by creating a forecast for revenue and then works its way down to net operating profit after tax (NOPAT), as shown below. 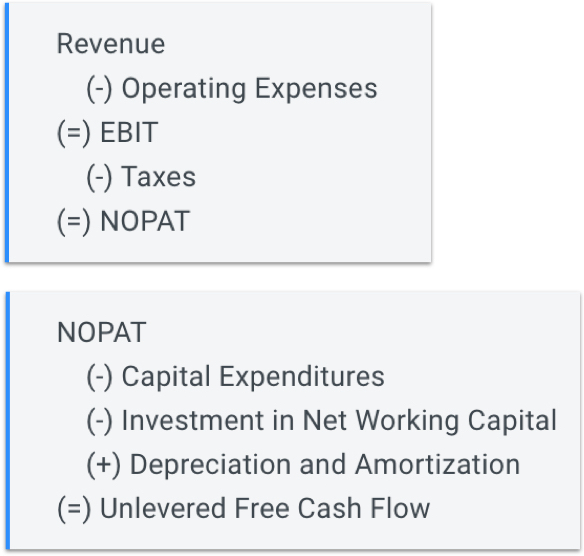 From NOPAT, deduct cash outflows like capital expenditures and investments in net working capital and add back non-cash expenses from the income statement such as depreciation and amortization to calculate the unlevered free cash flow forecast (shown above).

Working capital is often used as a measure of a company’s efficiency and short-term financial health. It is generally calculated as current assets minus current liabilities.

Finbox.io’s valuation models retroactively adjust historical financials to exclude these non-recurring items. We exclude these items to gain a better sense of how the company has performed in its normal course of business and since they are typically non-recurring charges, their exclusion helps provide a “cleaner” picture for comparing historical performance to projected performance.

When available, the finbox.io’s pre-built models use analyst forecasts as the starting assumptions. To forecast revenue, analysts gather data about the company, its customers and the state of the industry. I typically review the analysts’ forecast and modify the growth rates based on historical performance, news and other insights gathered from competitors. Note that if a company only has a small number of analysts giving projections, the consensus forecast tends to not be as reliable as companies that have several analysts’ estimates. Another check for reliability is to analyze the range of estimates. If the range is really wide, it may be less accurate. 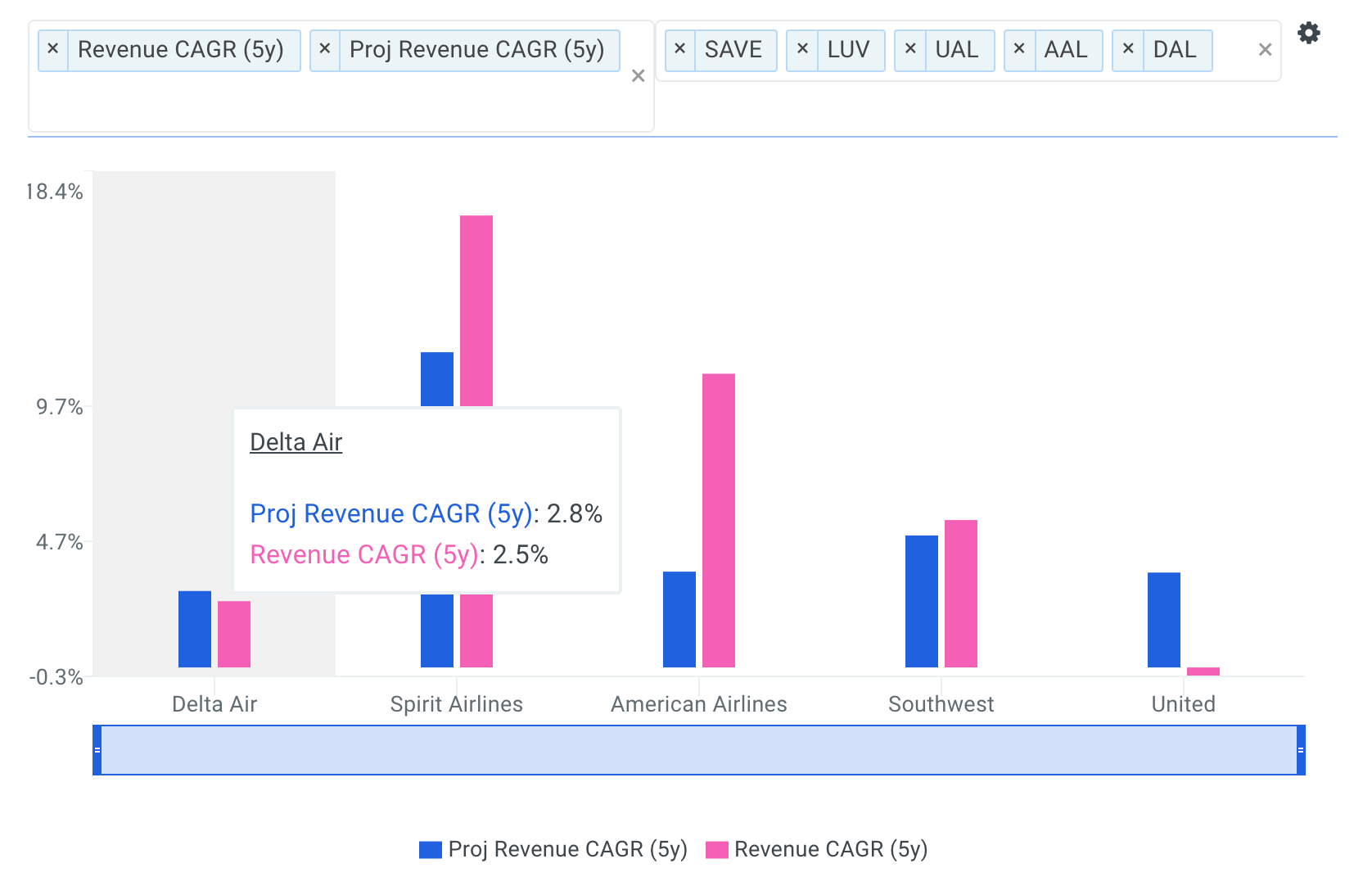 As highlighted below, Delta's revenue growth has ranged from -2.6% to 10.6% over the last five fiscal years. 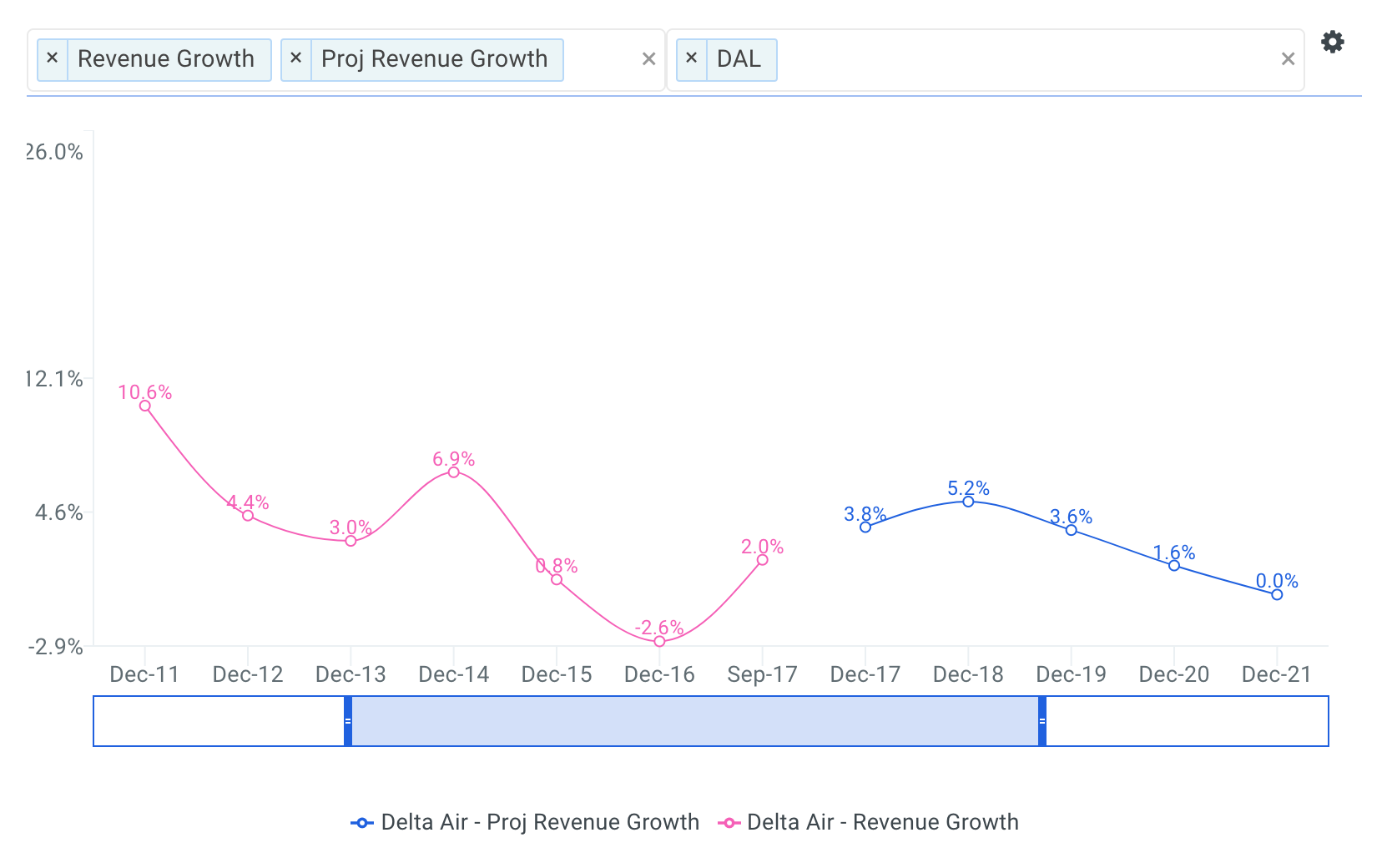 I keep these conservative assumptions in my model, which is shown below.

The next step is to forecast the company’s earnings before interest, taxes, depreciation and amortization (EBITDA). Note that EBITDA is a commonly used metric in valuation models because it provides a cleaner picture of overall profitability, especially when benchmarking against comparable companies. This is because it ignores non-operating costs that can be affected by certain items such as a company’s financing decisions or political jurisdictions. For more detail, see Delta's EBITDA definition. 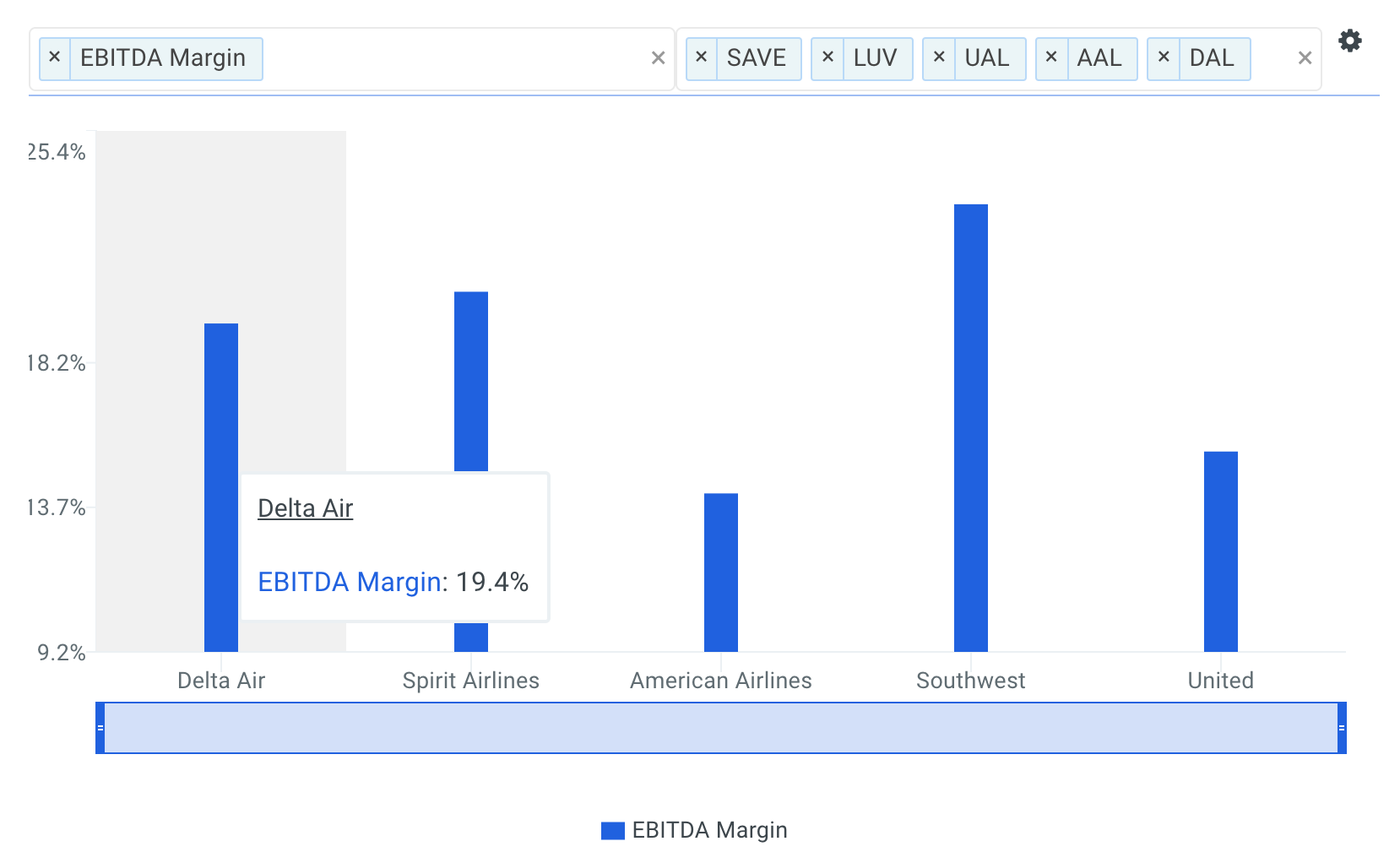 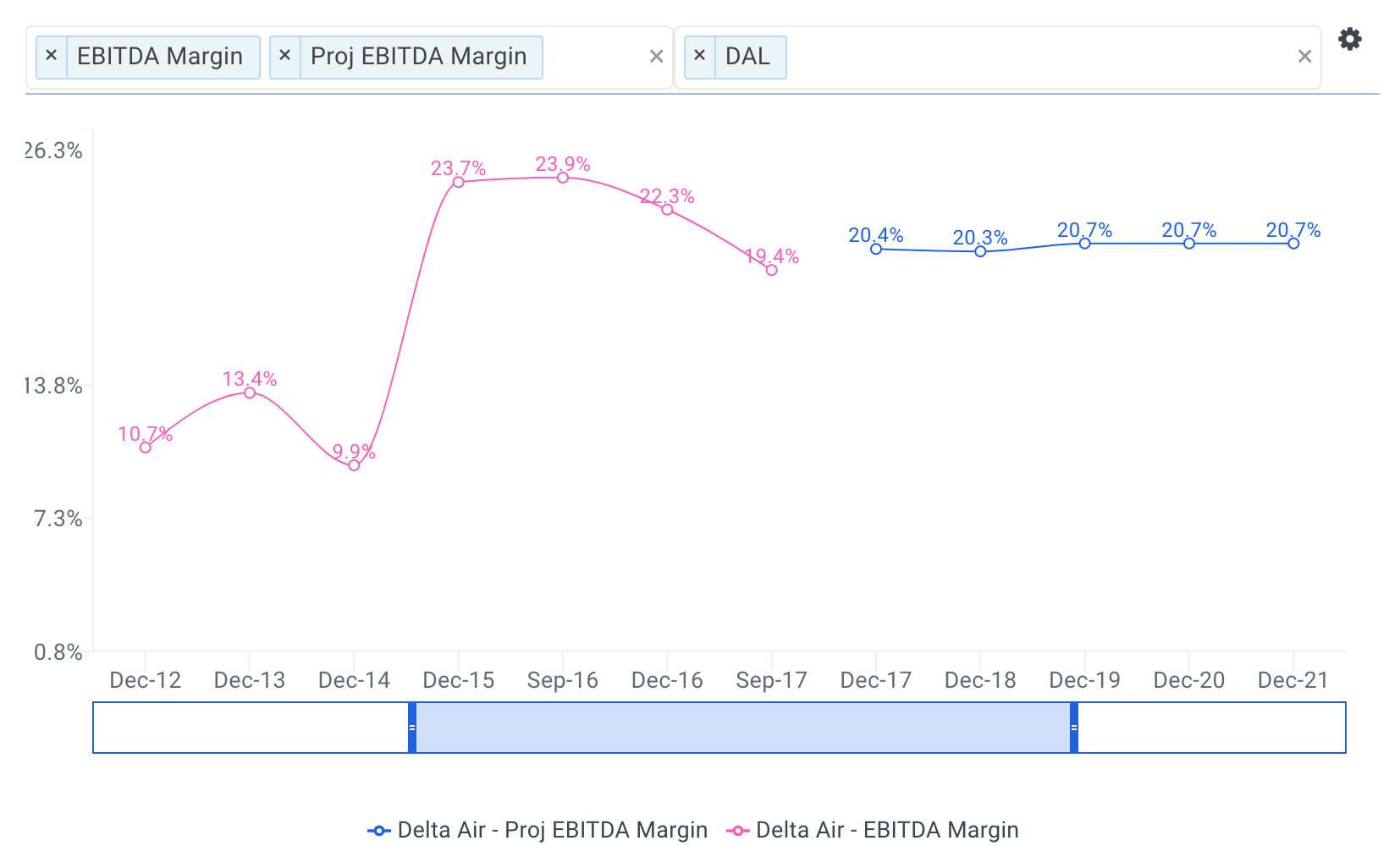 These assumptions seem very reasonable based on historical performance so I, again, kept them in my model shown below.

Depreciation and amortization (D&A) are usually embedded in cost of goods sold (COGS) or selling general and administrative expenses (SG&A) on the income statement. The model subtracts D&A to estimate NOPAT but eventually adds it back in the build-up to free cash flow because it’s a non-cash expense. Including it as an expense in the calculation of NOPAT allows the model to capture the tax benefits associated with D&A. While depreciation is a non-cash expense, the firm reduces its tax bill by expensing it, so the free cash flow available is increased by the tax savings.

Delta's historical and forecasted D&A is shown in the charts below. 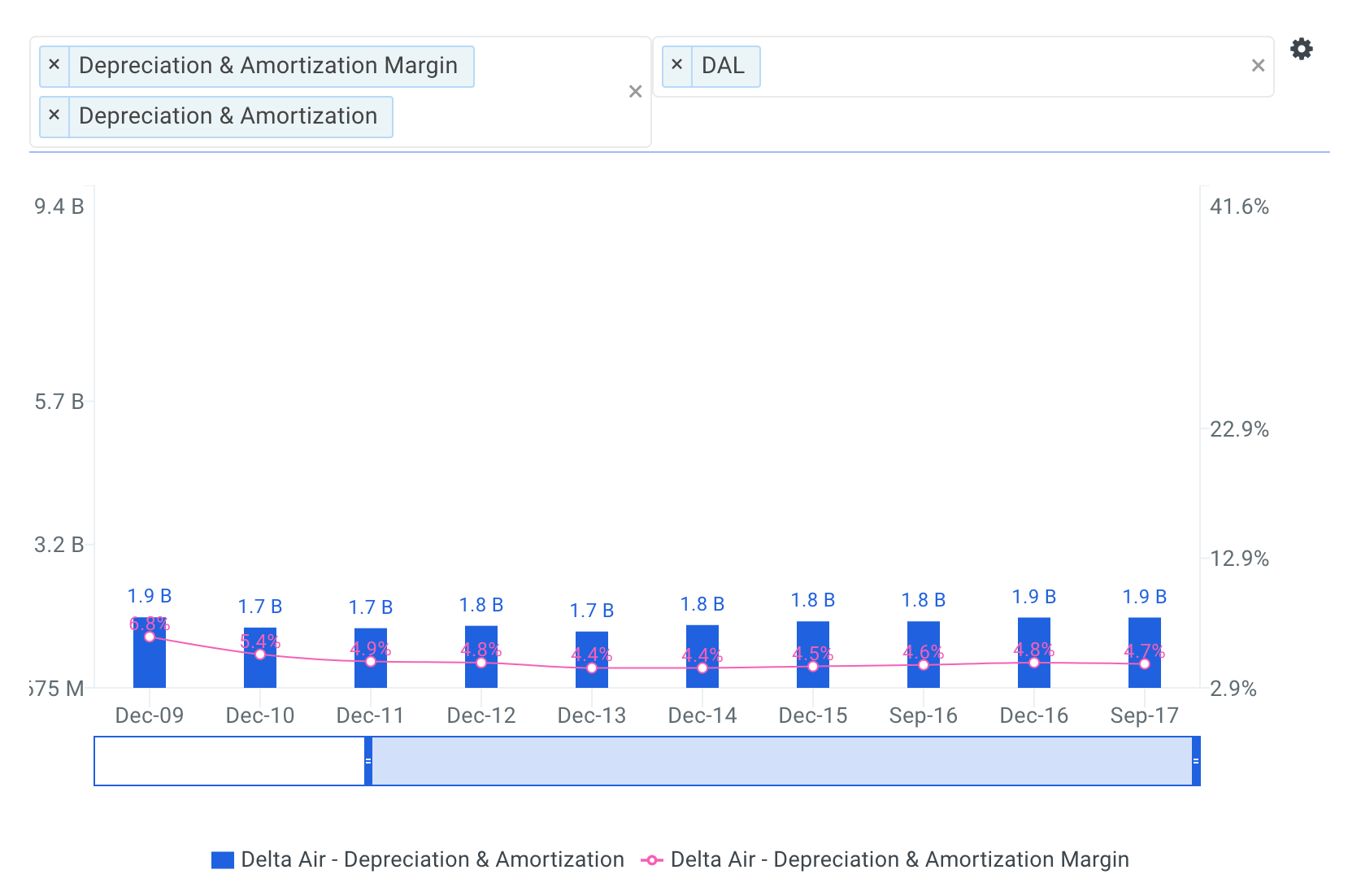 I’ve kept D&A at 4.6% of revenues throughout the projection period, which is in line with its past performance. 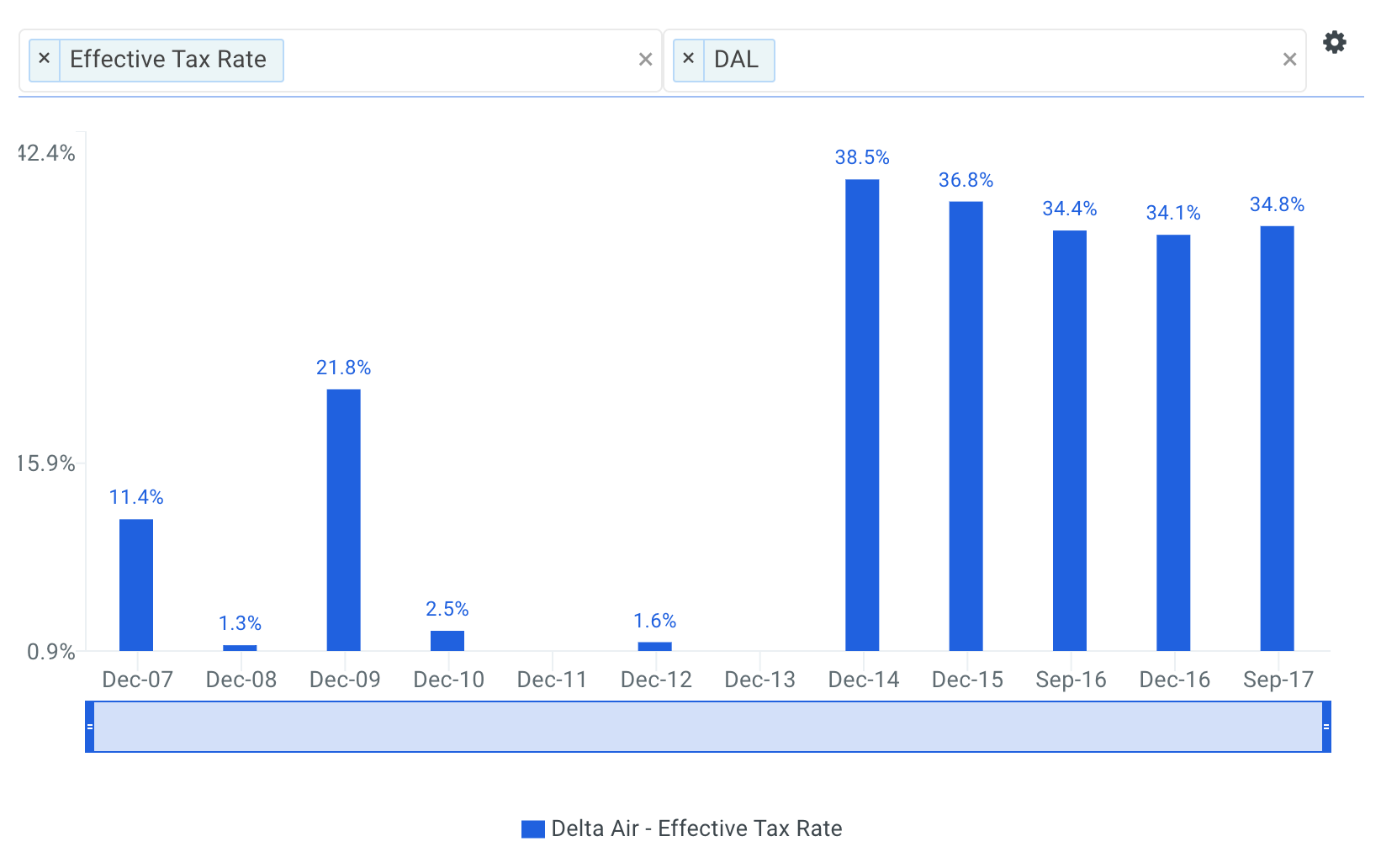 Note that President Trump signed a massive GOP tax bill into law right before Christmas bringing the corporate tax rate down from 35% to 21%. Therefore, historical tax rates are not indicative of what will be paid by companies going forward.

State and local taxes vary by jurisdiction so I selected a higher and more conservative 25% tax rate for Delta.

Value investors may also want to check out these high tax paying stocks with big upside.

Spending on plant, property, and equipment (PP&E), which is often referred to as capital expenditures allows a firm to continue to operate as well as grow its operations. The amount that Delta has spent (as a percentage of revenue) has ranged from 5.4% to 8.0% over the last five fiscal years. 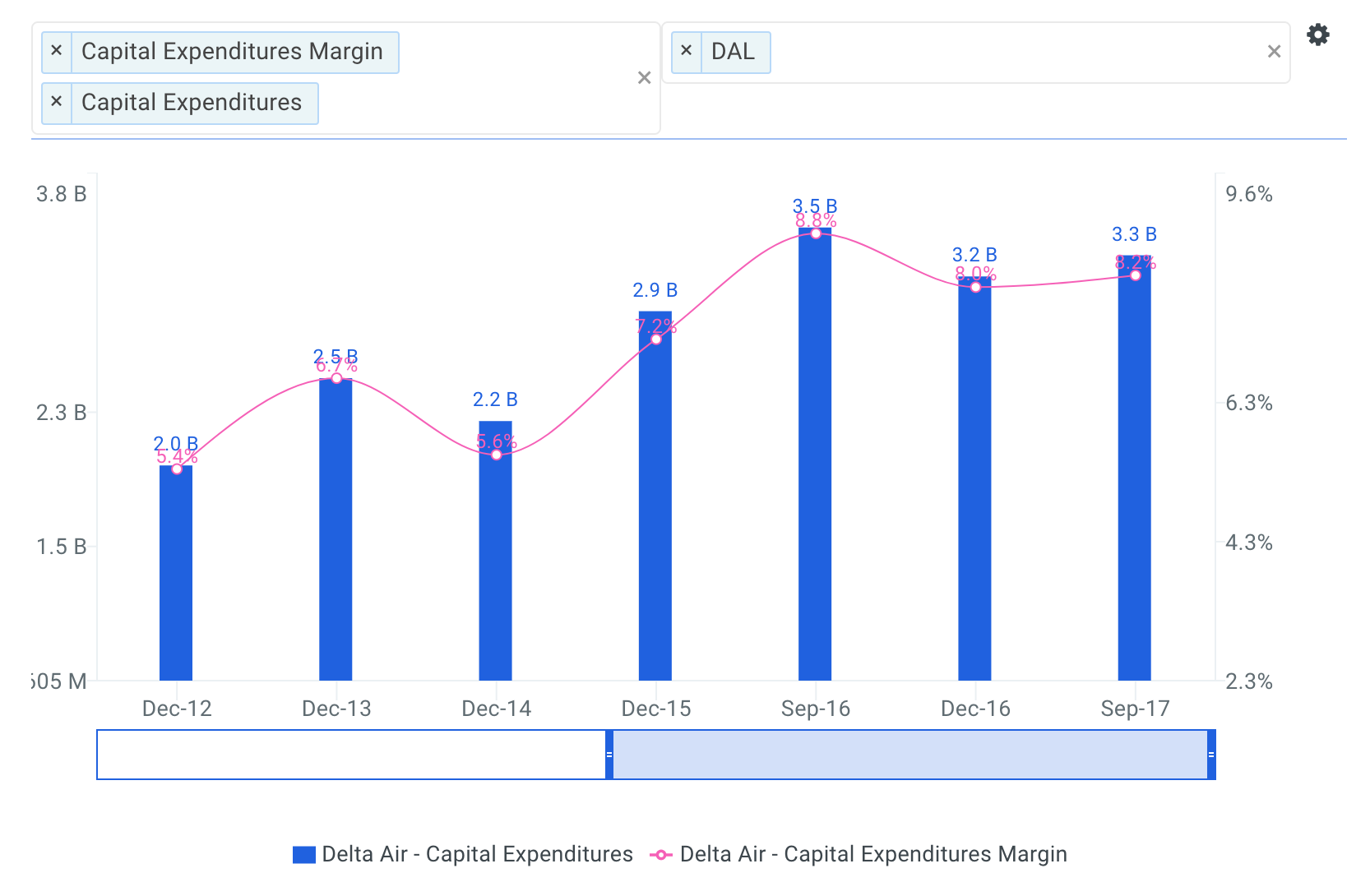 I apply Wall Street's consensus estimates below that call for Delta's capex margin to reach a high of 9.2% this year before falling to 7.9% the remainder of the projection period.

As a company grows, it typically needs to tie up more cash in working capital to manage its day-to-day operations effectively. The model accounts for the impact of this investment by first estimating Delta's net working capital (NWC) as a percentage of revenue and then deducting year-over-year increases from free cash flow. 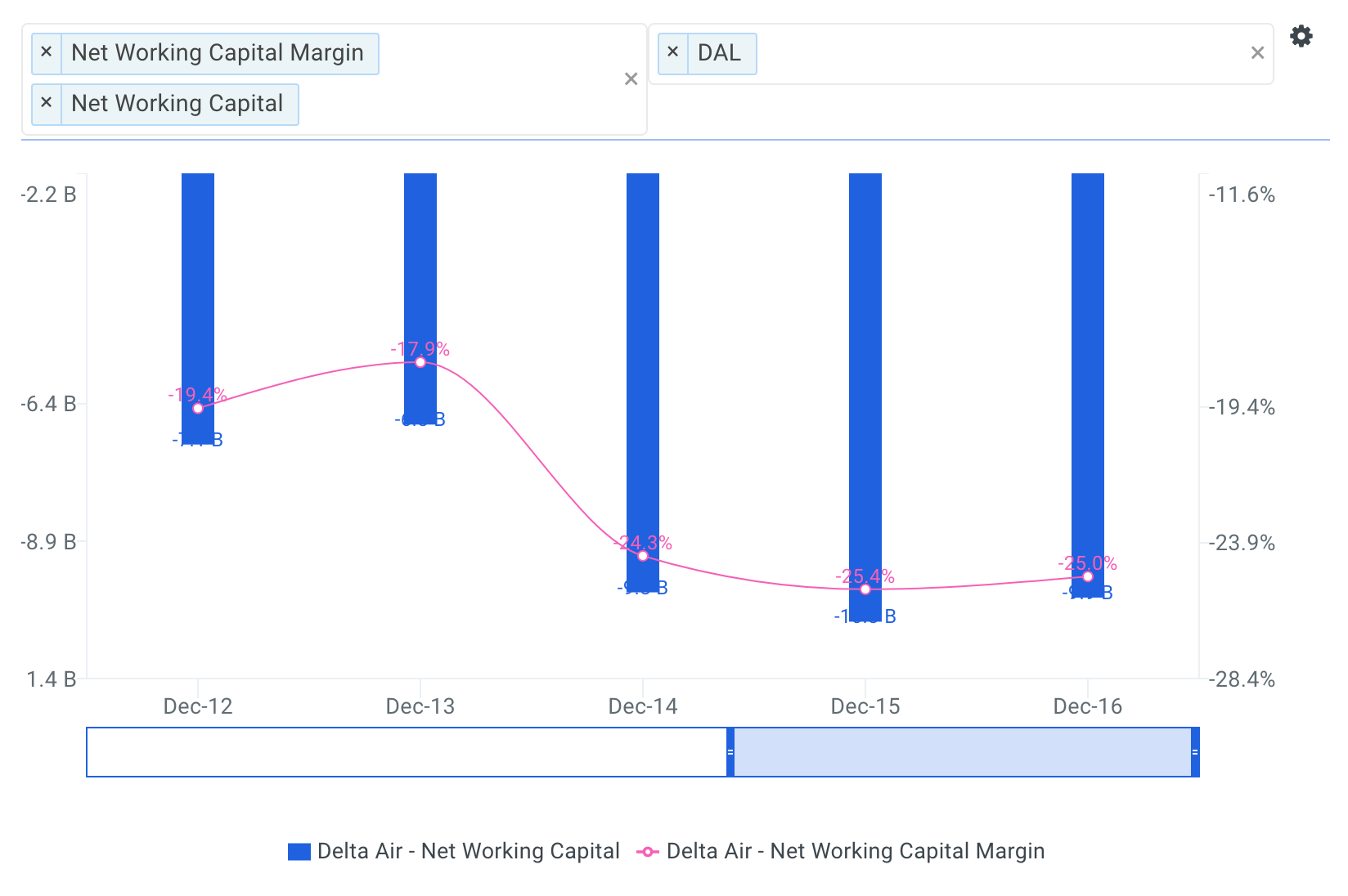 It is important to note that net working capital typically fluctuates more year over year than other DCF assumptions and is generally more difficult to project with as much confidence. Delta has historically required -22.4% of revenue on average for net working capital, but this figure has been as high as -17.9% and as low as -25.4%. The company’s latest fiscal-year NWC margin of -25.0% is in the ballpark, so I kept it at that level in the forecast shown in the figure below. 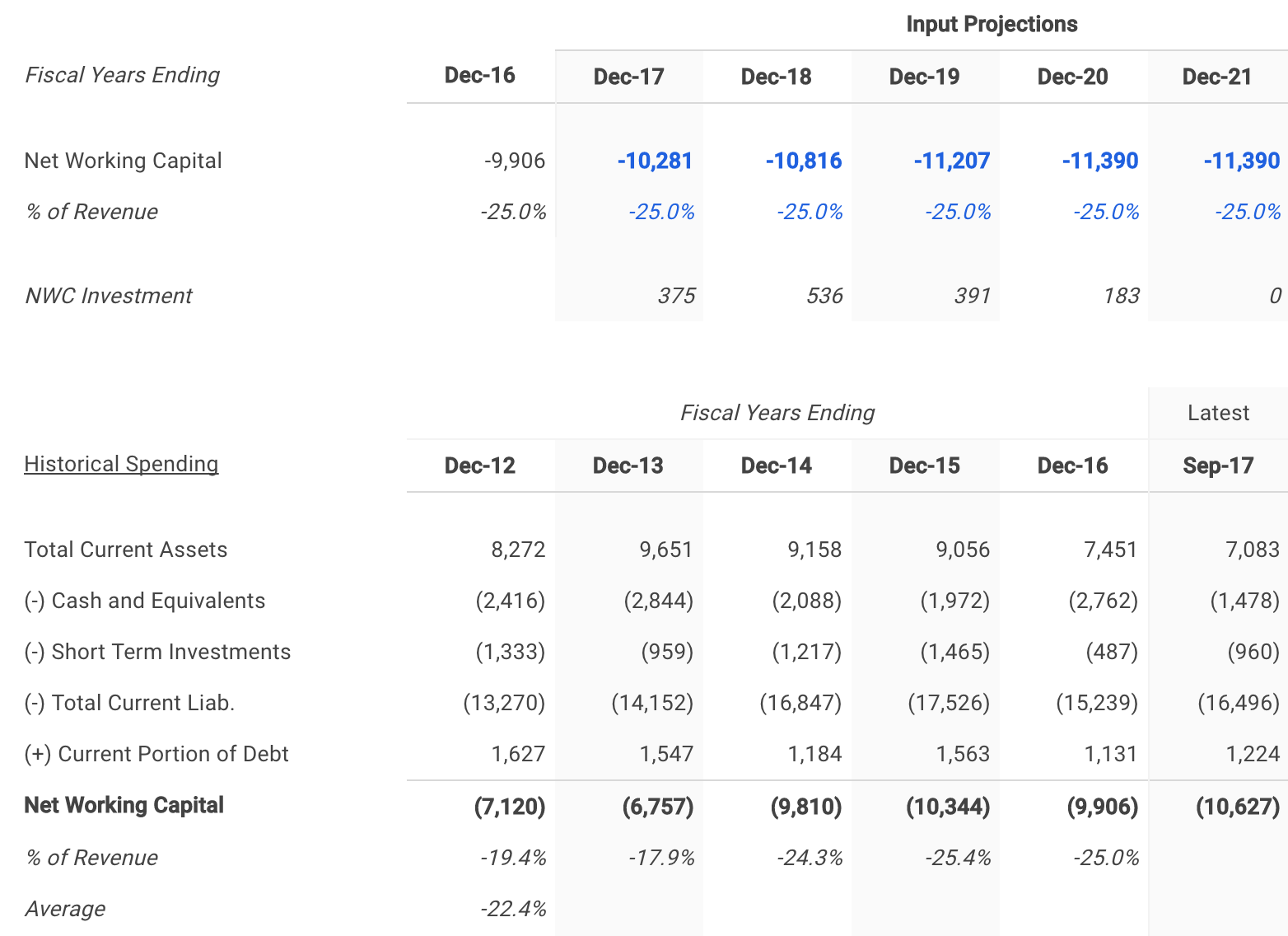 With all required forecasts in place, the next step is to calculate projected free cash flow as shown below. 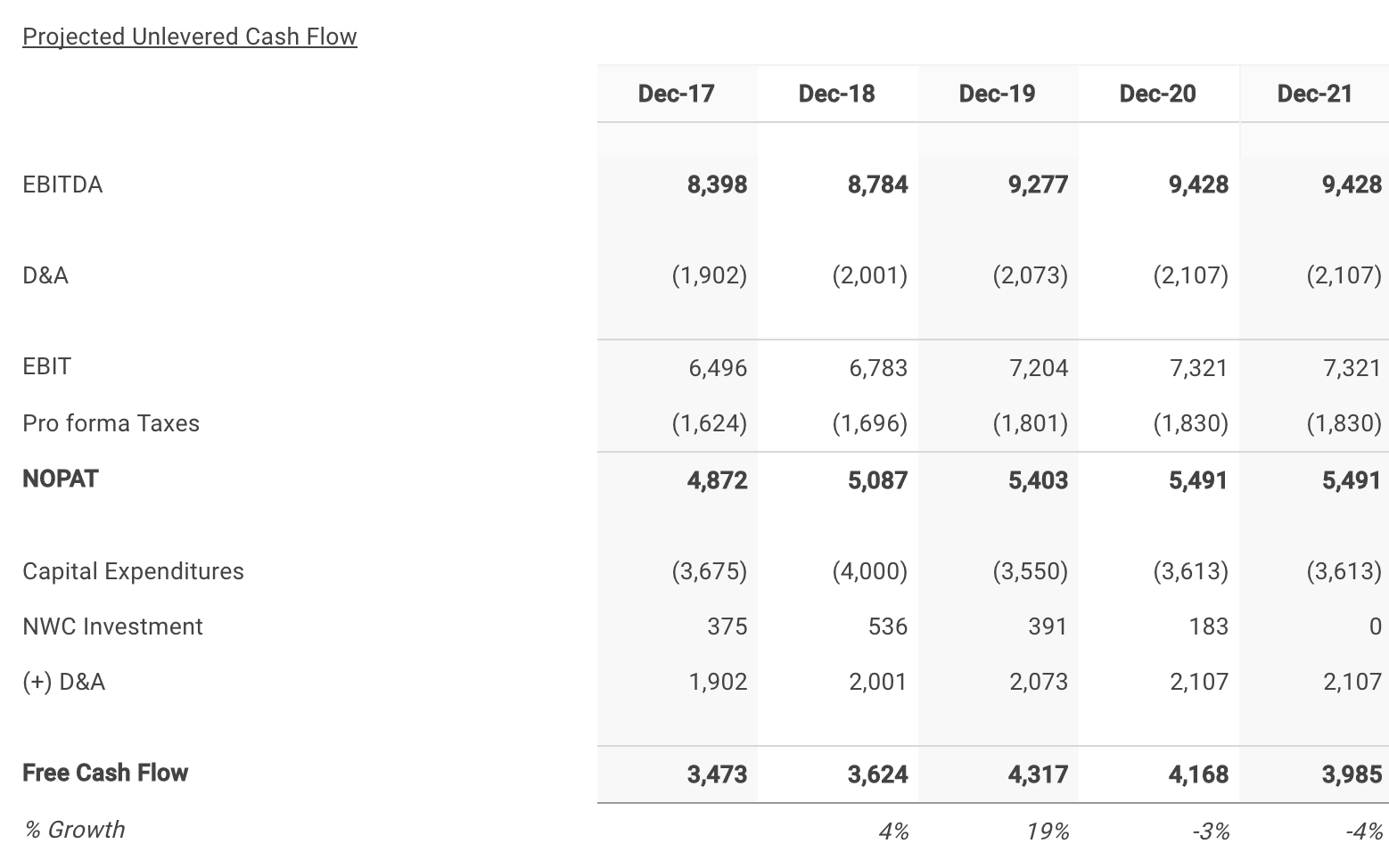 The next step is to select a discount rate to calculate the present value of the forecasted free cash flows. I used finbox.io’s Weighted Average Cost of Capital (WACC) model to help arrive at an estimate. Generally, a company’s assets are financed by either debt (debt is after tax in the formula) or equity. WACC is the average return expected by these capital providers, each weighted by respective usage. The WACC is the required return on the firm’s assets.

It’s important to note that the WACC is the appropriate discount rate to use because this analysis calculates the free cash flow available to Delta’s bondholders and common shareholders. On the other hand, the cost of equity would be the appropriate discount rate if we were calculating cash flows available only to Delta’s common shareholders (i.e., dividend discount model, equity DCF). This is commonly referred to as the difference between free cash flow to equity (FCFE) and free cash flow to the firm (FCFF). By using the WACC to discount FCFF, we are calculating total firm value. If we discounted FCFE at the required return on equity, we would end up with equity value of the firm. Equity value of the firm is simply total firm value minus the market value of debt.

I determined a reasonable WACC estimate for Delta to be 8.0% at the midpoint. An updated cost of capital analysis using real-time data can be found at finbox.io's Delta WACC Model Page. The DCF model then does the heavy lifting of calculating the discount factors by applying the mid-year convention technique.

Since it is not reasonable to expect that Delta will cease its operations at the end of the five-year forecast period, we must estimate the company’s continuing value, or terminal value. Terminal value is an important part of the DCF model because it accounts for the largest percentage of the calculated present value of the firm. If you were to exclude the terminal value, you would be excluding all the future cash flow past the horizon period. Using finbox.io, users can choose a five-year or 10-year horizon period to forecast future free cash flow.

As the formula suggests, we need to estimate a “perpetuity” growth rate at which we expect Delta’s free cash flows to grow forever. Most analysts suggest that a reasonable rate is typically between the historical inflation rate of 2% to 3% and the historical GDP growth rate of 4% to 5%.

However, I selected a perpetuity growth rate of 0.25% (at the midpoint) because Delta's free cash flows are growing below these levels at the end of the projection period. 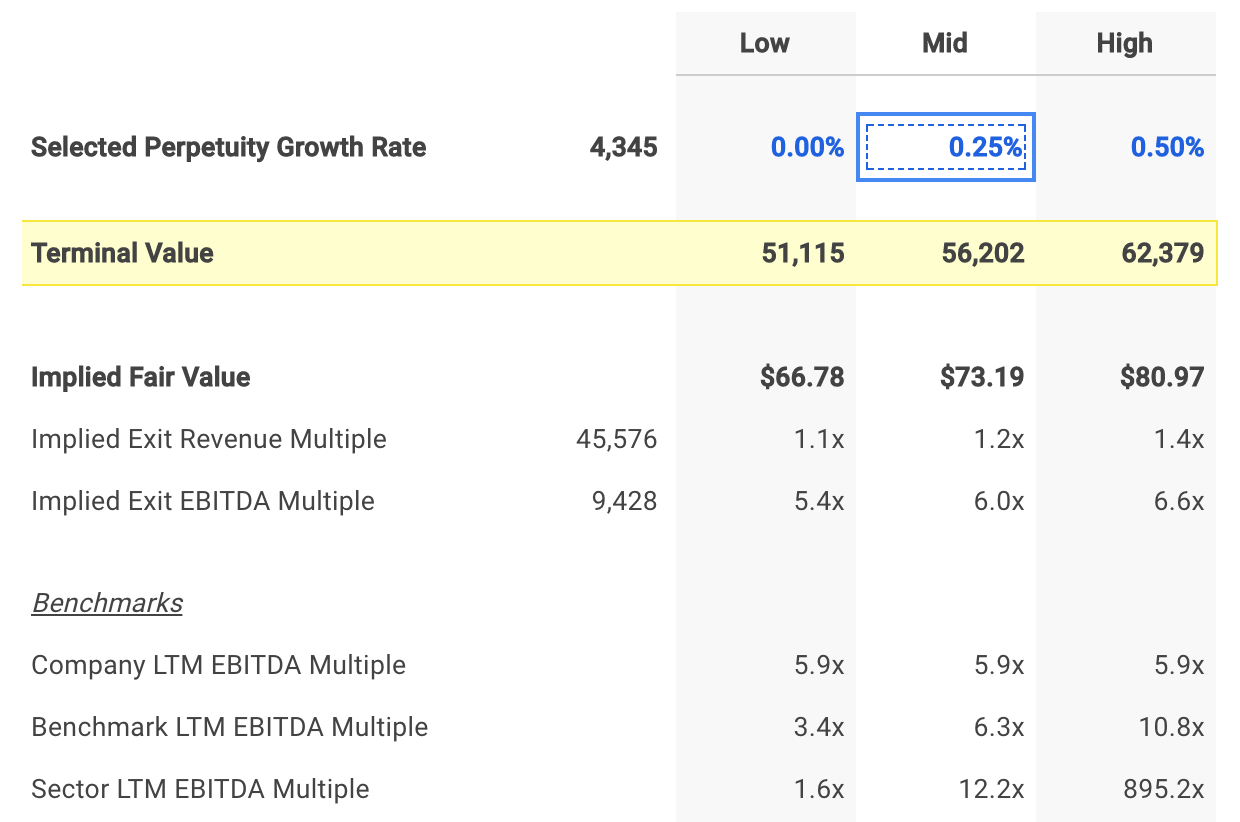 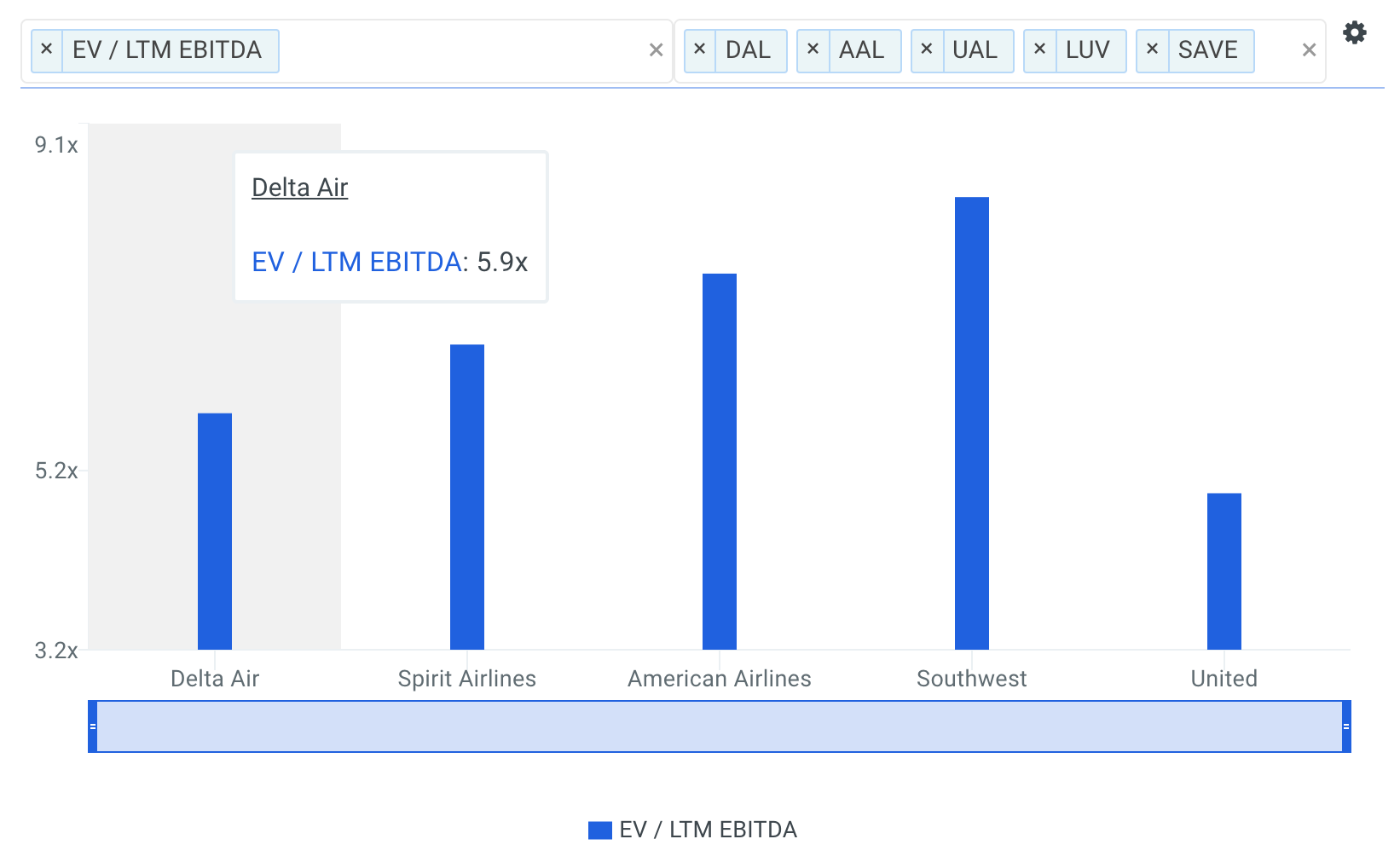 The enterprise value previously calculated is a measure of the company’s total value. An equity waterfall is a term often used by valuation firms, referring to the trickle-down process of computing a company’s equity value from its enterprise value. Note that in the event of a bankruptcy, debt holders will be paid in full before anything is distributed to common shareholders. Therefore, we must subtract debt and other financial obligations to determine a firm’s equity value. The general formula for calculating equity value is illustrated in the figure below. 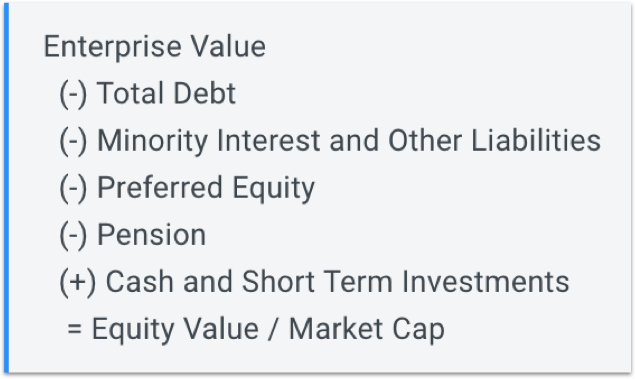 The model uses the formula shown above to calculate equity value and divides the result by the shares outstanding to compute intrinsic value per share as shown at the bottom of the figure below. 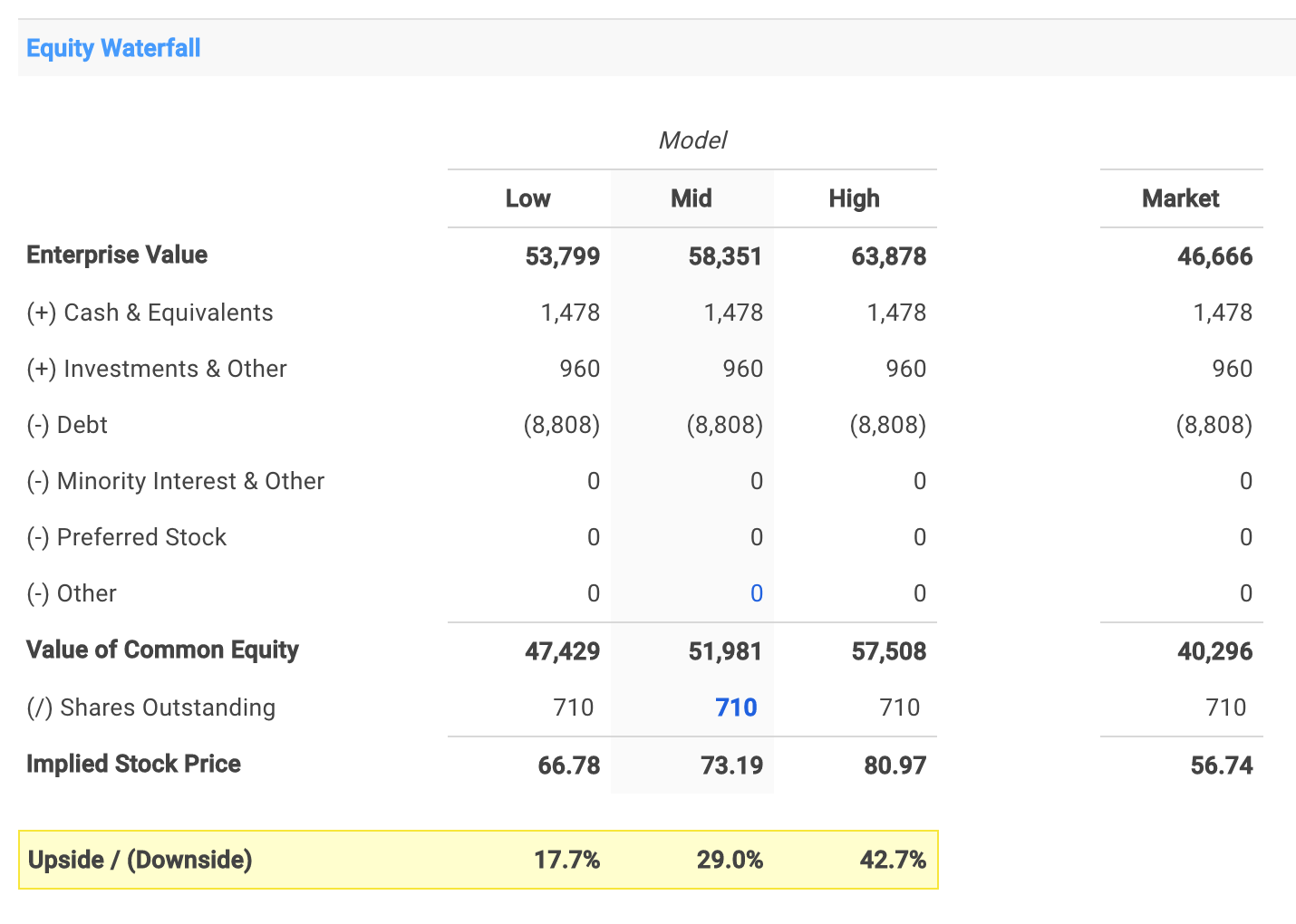 The assumptions I used in the model imply an intrinsic value per share range of $66.78 to $80.97 for Delta.

A DCF analysis can seem complex at first, but it’s worth adding to your investment analysis toolbox since it provides the clearest view of company value. I’ll end with this quote by renowned economist John Maynard Keynes:

“It is better to be roughly right than precisely wrong.”

Instead of focusing on the getting each of the assumptions exactly right, take Keynes’ advice on being roughly right. Select different assumptions deemed reasonable to get a sense for key drivers of value. Apply multiple scenarios (e.g., base case, downside case etc.) to get comfortable with the upside and downside potential of the company.