ValueWalk
Home Economics Not only was China the largest importer of copper, crude oil, natural...

This week the U.S. Global Investors office was visited by a living legend in the junior mining industry, billionaire founder and executive chairman of Ivanhoe Mines, Robert Friedland. In case you don’t know, back in the mid-1970s, Robert was caretaker of an apple orchard south of Portland that one of his buddies from Reed College would often visit. That buddy’s name was Steve Jobs, who later went on to found a little company he named—what else?—Apple.

Before Robert and Steve Jobs began palling around, Jobs was known as shy and withdrawn. It was Robert who taught him his skills in what’s been described by many as “reality distortion.” Having seen numerous speeches by Robert over the years, I can attest to his masterful ability to utterly command a room of hundreds with his electric charisma. Some of that charisma must have rubbed off on Jobs, helping the future iPhone innovator evolve into the shrewd, larger-than-life business leader he’s celebrated as today.

Robert’s “reality distortion” was on full display during his visit. I was pleased and honored, as were my U.S. Global team members, to have the opportunity to hear his unique insights on a wide range of issues, from the debilitating smog in Delhi, India; to China’s efforts to become the world’s leading electric vehicle (EV) economy; to Ivanhoe’s development of the Kamoa-Kakula Copper Project in the Democratic Republic of Congo, independently ranked as the largest high-grade copper discovery in the world.

Robert made a very compelling case for Kamoa-Kakula, which he calls “the most disruptive Tier One copper project in the world today.” In its first year of production, its average copper grade is estimated to average an ultra-high 7.3 percent. Because the site is flat and uninhabited, and wages are paid in local currency, the cash cost for the life of the mine is projected to be a low, low $0.64 per pound of copper. As of my writing this, copper is priced at $3.20 a pound, so the margin is significant. After an initial $1.2 billion in capital costs to develop the project, the company expects a payback period of only 3.1 years.

It’s all a very attractive proposition.

I reminded Robert that we’re bullish on both copper and the industries it supports, including the imminent EV revolution and massive electricity demand in emerging markets, especially China and India. EVs, as I’ve pointed out before, require three to four times as much copper as traditional gas-powered vehicles. By 2027, as much as 1.74 million metric tons of copper will be needed to meet EV demand alone, up from only 185,000 tons today, according to the International Copper Association.

The red metal was one of the best performing commodities last year, surging more than 30 percent, and with investment demand near all-time highs, I predict another year of phenomenal returns. That would represent a third straight year of positive gains, something copper hasn’t accomplished this decade.

As you can see below, open interest in copper futures on the Chicago Mercantile Exchange (CME) is still historically high, even after cooling somewhat from its all-time high set in late July, when contracts hit an average 319,000 contracts. Open positions last month averaged more than 285,000, up 7.3 percent from the previous month and 26.9 percent from December 2016.

Robert expressed confidence that copper—along with aluminum, cobalt, nickel, platinum and scandium—will be among the biggest beneficiaries of the global transition to EVs and clean energy.

“You’re going to need a telescope to see copper prices in 2021,” he told us theatrically.

A rally is already in the works. From its recent low two years ago this month, the Bloomberg Industrial Metals Subindex, which tracks aluminum, copper, nickel and zinc, has surged more than 65 percent. Support looks strong, and copper prices could be headed even higher on global supply disruptions, as labor negotiations continue in Chile, the world’s top producer of the red metal.

“There are between 20 and 25 collective negotiations expected. If some of them lead to significant strikes, that would have a positive impact on [copper] prices,” explained Sergio Hernandez, vice president of Cochilco, Chile’s state copper commission. Other fundamental trends are driving commodities, as I’ve noted earlier. The global purchasing manager’s index (PMI), a gauge of the manufacturing industry, is near a seven-year high. Construction confidence in the eurozone turned positive. And construction spending here in the U.S. hit $1.257 trillion in November, a new high.

China and India Cleaning Up Its Act

About half of all the copper produced globally every year is consumed by China. Last year, the Asian giant set a new record in importing the red metal. Imports climbed to a never-before-seen 17.35 million metric tons in 2017, up 2.3 percent from the previous year. The metal is needed not just for the construction of new buildings but also to manufacture millions of new electric vehicles in the world’s largest auto market. Sometime this year, China is expected to announce when it plans to outlaw gas-powered vehicles, joining a growing number of other countries, including the U.K. (which is shooting for a 2040 ban), France (2040), Germany (2030), India (“next 13 years”) and more.

According to Bloomberg New Energy Finance, about 1,293 gigawatts per hour (GWh) are forecast for the lithium-ion battery market. That’s up spectacularly from only 19 GWh in 2015. About two thirds of the demand will come from China and the U.S. 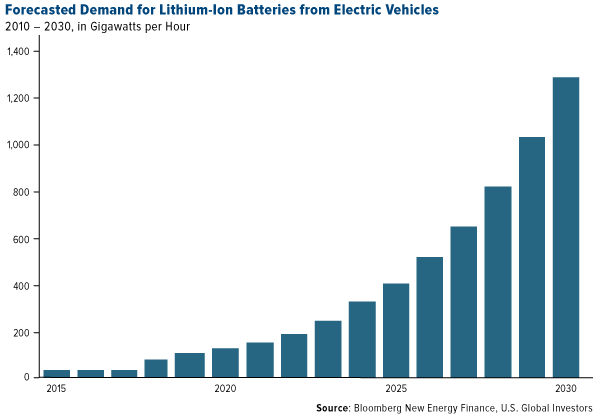 To accommodate all these new EVs, China has pledged to build a charging station for every vehicle on the road by 2020. That equates to around 4.8 million charging outlets and stations, requiring a total investment of $19 billion. China had 190,000 charging stations at the end of September, so to call this goal ambitious is an understatement. The U.S., by comparison, has a little over 64,000 outlets and stations around the country, according to the Department of Energy.

Even William Ford Jr., Ford Motor’s executive chairman, acknowledged that the Chinese are more aggressive than most in their mission to fully embrace the electric vehicle. “When I think of where EVs are going,” Ford said in Shanghai last month, “it’s clearly the case that China will lead the world in EV development.”

Not only was China the largest importer of copper, crude oil, natural gas and other natural resources, it also outspent every other country in new clean energy capacity. The country invested as much as $132.6 billion in 2017, about 16 percent more than the U.S. and Europe combined. The government’s efforts already seem to be having a positive effect, as sales of face masks and air purifiers in Beijing have fallen dramatically compared to last winter. Another market that’s in urgent need of clean energy is India. In Delhi, the country’s capital territory, the air quality has become so noxious and filled with heavy metals that the World Health Organization has likened it to smoking at least 50 cigarettes a day. The city’s chief minister, Arvind Kejriwal, went so far as to call it a “gas chamber.”

Shell Shelling Out for Electricity Provider

It’s not just governments seeking to diversify their energy mix. Royal Dutch Shell, the largest oil company in Europe, is steadily acquiring smaller providers of electrical power and natural gas. In December it announced a deal to buy retail energy provider First Utility. It’s just the latest in a series of purchases by large oil and gas companies looking ahead to the day when charging stations, rather than gas stations, might be the norm.

In an interview this month, Shell CEO Ben van Beurden sees the current energy transition as an opportunity.

“We have to embrace the future, and the future will include battery electric cars,” van Beurden said. “Importantly, I believe Shell can achieve this without destroying value in the company. It is about identifying real business opportunities to thrive through the energy transition.”

As my friend Robert Friedland sees it, those business opportunities lie in copper, aluminum, cobalt and other key industrial metals.

“We’re in the battery business,” he told us, adding that very little of lithium-ion batteries is actually lithium. At the moment I’m in Delray Beach, Florida, attending the Black Diamond Investment Conference, where I was excited to see a 2007 Lamborghini Murcielago for sale. It wasn’t so much the fact that it was a Lamborghini but that the sellers were seeking payment in cryptocurrency only. In case you have 48 bitcoins lying around—valued at a little over half a million dollars at today’s price—you could be the proud new owner of a top-quality sports car. I’m pleased to see even more transactions being made in bitcoin and other cryptocurrencies.