The Maggiore Fund I LP from Chicago based Como Asset Management may have been able to muster up a respectable December return of 1.45% but with a year-end total return of 2.98%, performance has landed far short of targets, according to a letter to investors reviewed by ValueWalk. 1 The fund, which is managed by John Showel, has not had a terrible year – reaching a high compared against its past three years and delivering 20% outperformance against the 10-year US Treasury yield. However, with simple, passive instruments such as equity index-tracking ETFs offering double these returns the question inevitably arises – what went right, and perhaps more importantly what went wrong for Como in 2017?

Underpinned by an approach of tactical positioning through gradual adjustments the Maggiore Fund was unable to capture significant amounts of alpha in the low volatility climate of 2017. Interestingly, the fund will continue with this approach of dynamically adjusting with market conditions into 2018 based on a view that this approach picked up some speed into year end and has the potential to continue through the subsequent 4 quarters. 1

A Focus on Central Bank Actions

The fund’s managers, like many of its peers are awaiting a so-called central bank “normalization.” Famous last words or prudent positioning? Central bank support led to the market gains across fixed income and equity markets in each of the four quarters of last year. Numerous macro hedge funds, (Including funds at Odey Asset Management and Horseman Capital) were caught off guard in 2017 as they bearishly waited for the impact of tapering in quantitative easing to hit markets. Will Como be left on the wrong side of the equation waiting for central banks to execute sharp monetary tightening? Making the call of where and when the tide will turn bearish is proving trickier than expected.

To be fair to these managers there have been certain distortions in the market over the past year to fuel their confusion. Take for example the recent launches of century bonds – from Mexico, Argentina and Ireland amongst others. It is far from surprising that managers consider the issuance of a 100-year dollar denominated bond in Argentina last summer as absurd – when we keep in mind that less than 20 years ago (remember: the contract term is a century) Argentina defaulted on about $95 billion of its debt, leaving investors with an approximate, painful, haircut of around 70%. 1 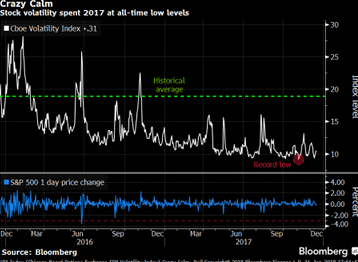 That being said, market indications do not suggest any significant retracement in these distortions over the short-term horizon. Additionally, we cannot clearly see an end to the current monetary support programs from the Federal Reserve in the US, with the majority expectation of a rate rise of up to a maximum of 1.5% the most likely outcome of the year. Likewise, there is little sign of the Bank of Japan and the European Central Bank taking steps to reverse negative short-term rates or quantitative easing volumes from current levels.

While central bank policy remains the key focus for many managers there could be some tactical alpha to be captured by focusing on corporate debt. An interesting phenomenon from 2017, despite the low volatility environment, was that a handful of heavily indebted corporates saw sharp divergences in bond and equity prices when bad news surfaced about them. This type of market movement is prime for active adjustments – but the timing will be difficult to call. Could growing corporate debt levels and sensitivities be the trigger point for a downside turn in 2018?