In a world where algorithms are gaining more and more influence, we can sometimes be a bit surprised at just how much can be quantified. Prattle, a data firm based in St. Louis who provides investment research by quantifying “market moving language,” recently launched a platform that delivers real-time, quantitative analysis of corporate earnings calls from nearly 3,000 publicly traded companies in the U.S. “Prattle’s new Equities Analytics platform uses a combination of natural language processing, sentiment analysis and machine learning to create a unique lexicon for each company, then uses that information to quantify the market impact of an earnings call based on the historical relationship between the company’s language and corresponding market activity,” reads their website.

This phenomenon isn't exactly new. Back in 2008, researchers found linguistic media content to capture firm fundamentals, and an increasing amount of academic literature has continued to study the effect of textual information (reports, press releases, financial documents, etc.) and firm performance. The sentiment, however, can be measured by nontextual details as well. In 2012, researchers found stress in a manager's voice to often be a better predictor of firm performance than the words they're speaking -- which raises the question, does CEO mood affect firm performance?

Analyzing over 500 videos of Fortune 500 CEO interviews, from a variety of media sources including CNBC, Bloomberg, Reuters, YouTube and many others, the researchers were able to measure mood by capturing how facial regions change shape over the course of the interview. The interviews consisted of CEOs speaking about business related issues regarding their company. Executives from a variety of industries were represented, with business equipment holding the most significant share representing 18.23% of the sample, with financials following at 17.67%.

The emotions that were able to be measured included anger, disgust, sadness, happiness, surprise, and fear. The state of individual facial regions determines the particular emotion. For example, when eyebrows fall, eyes close, the mouth closes, and lip corners pull, an expression of disgust is captured. Of the six emotions, the one having to show the most significant effects was fear. During the day of the interview, the researchers found a 1% increase in their measure of facial fear led to a 0.4% increase in abnormal returns. 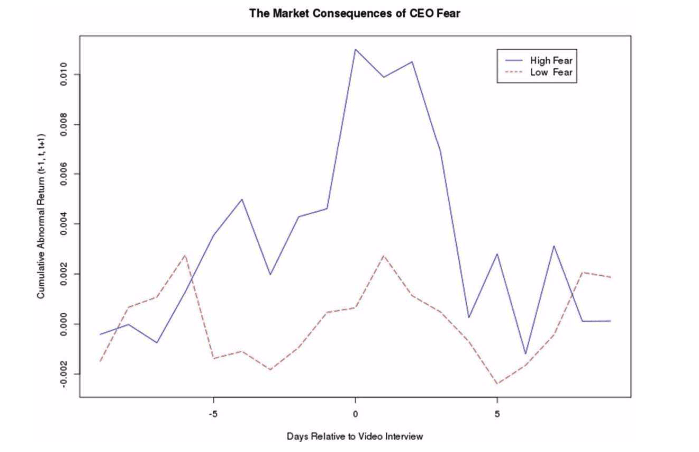 It didn't just returns that were affected, but profitability as well. Akansu et al. also found that a CEO who exhibits a 1% increase in anger during an interview, sees sales growth increase by 1.1% in the subsequent quarter. Further, a CEO who displays disgust increases profit margin by 9.3% and return on assets by 0.6% in the following quarter. Many different results occurred with happy CEOs. In the first quarter after their interview, we see declines of -12.2% in profit margin, -24.4% in return on equity, and -1.2% in return on assets. A possible explanation for these results was provided in the conclusion of the study:

"We provide evidence that a disgusted or angry CEO is more likely to take action to improve firm profitability. We suggest this is because a CEO experiencing negative emotions, such as anger and disgust, is more likely to be diligent and to perform thorough and complete analyses of difficult problems. Such CEOs are more likely to engage in the unpleasant and difficult tasks involved in improving firm performance. On the other hand, a CEO who is happy appears to fail to increase profitability. We suggest that a happy CEO often falls back on simplified decision-making processes, sometimes even preferring to rely on intuition. Thus, a happy CEO experiences reduced cognitive abilities. In this state, they avoid the difficult and unpleasant tasks required to improve firm performance."