ValueWalk
Home Technology BitStamp And Bitfinex – In A Bearish Place

We’re hearing a lot about Bitcoin these days. The stories range from fortunes made on the currency to the idea that this is the biggest bubble in history. What we’re not seeing much of are analyses of the Bitcoin market, and even less so of Bitcoin users. Now, in an article on the Fortune website, we read:

Nearly 60 percent of Americans have heard or read about the world’s largest cryptocurrency, according to a joint SurveyMonkey and Global Blockchain Business Council poll of more than 5,700 adults conducted in January. But only 5 percent of people actually own the digital coin.

Those few Bitcoin investors are of a fairly consistent demographic. An overwhelming 71 percent of them are male. The majority — 58 percent — are young, between the ages of 18 and 34 years old. And unlike the broader U.S. population, nearly half of them are minorities.

When asked why they bought the crypto asset, investors answered that a combination of a lack of trust and an opportunity for return are at play. About one-third of Bitcoin owners said it was a means to avoid government regulation — 24 percent also said they trust Bitcoin more than the U.S. government in a separate question — and about two in 10 saw it as a hedge against crashes in traditional assets. More than 60 percent also said that buying the digital coin was seen as a growth investment.

This shows at least one thing. It is generally easy to think that people are buying Bitcoin because they believe that the currency will become much more important in the future. We have seen a lot of statements along the like of “Investors believe in Bitcoin” or “Bitcoin will turn payments upside down.” What they mean is actually not clear. We, however, are inclined to go deeper as far as the forces driving the market are concerned, since we want to give you a clearer idea of what’s going on in the market.

If we indeed go deeper, then the facts that people buy Bitcoin mostly for capital gains and that the buyers are young suggest that if we see a sizable correction, the expectations of appreciation might evaporate and the investors might be impatient in such a situation, and behave emotionally. This is to say, they could leave the market in a hurry. This might not be what you hear in the media or on Internet forums but we’re not in the business of writing what’s convenient, we’re here to give you the facts.

For now, let’s focus on the charts.

On BitStamp, we saw back and forth action around the 61.8% Fibonacci retracement level. Does this mean that the move down is now further confirmed? Or might this suggest that we are close to a reversal? Recall what we wrote previously:

If the situation was a bit unclear previously, it seems much clearer right now. The move below the 38.2% Fibonacci retracement level at $14,276 is now confirmed and we might even get a confirmation in time of the move below the 50% retracement at $12,611. This are extremely bearish developments, possibly game-changing.

Even though Bitcoin went up and crossed the 50% retracement, it didn’t reach the 38.2% retracement. And the move up was on low volume. The appreciation was quickly erased yesterday and this trend has continued also today. At the moment of writing, Bitcoin is lower than when we opened the hypothetical shorts, so the situation is definitely not bullish. The short-term indications are pointing to the conclusion that the appreciation was a counter-trend bounce.

The situation hasn’t changed much since our previous alert was posted. And even though the price hasn’t moved significantly, the situation is not boring. Bitcoin is well below the 50% retracement and close to the 61.8% retracement. The move down is confirmed and we are still of the opinion that the situation remains bearish for the medium term. The one thing that makes the environment tense if that we haven’t seen much indications as far as the short-term picture is concerned. 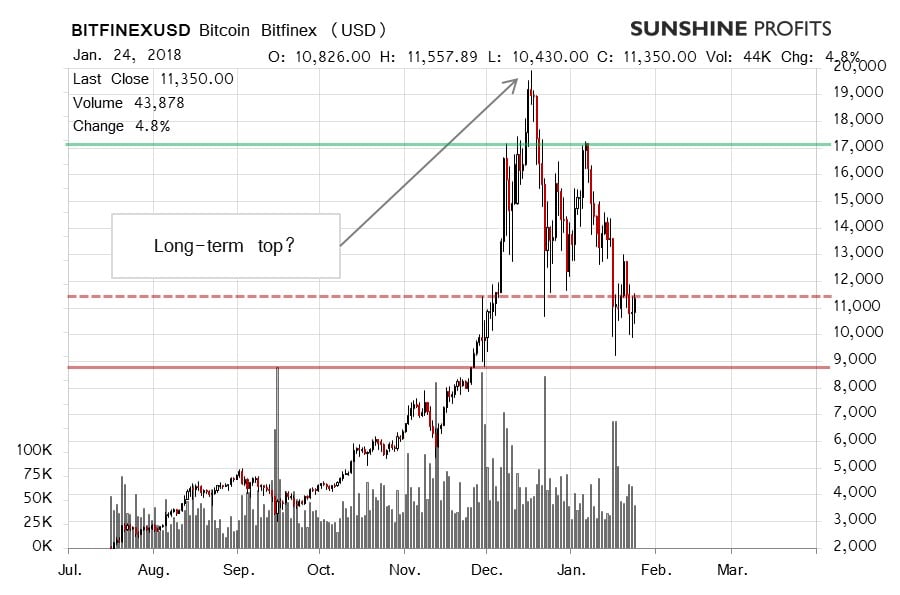 On the long-term Bitfinex chart, we see the dramatic depreciation from the level of $20,000. Recall our recent comments:

The last couple of days played out pretty much in line with the sketched scenario. Bitcoin was in an uncertain environment as far as the next couple of days was concerned and it actually went up, counter to the preceding move. But this move up was quickly reversed and the currency continued its medium-term trend to the downside, actually erasing a substantial part of the counter-trend move. Is the current situation different than what we saw a couple of days ago. No. In terms of the medium-term outlook, the implications are pretty much the same. In terms of the short-term outlook the situation is clearer than before since we have already seen a move to the upside, its reversal, a potential move below the 61.8% retracement, and Bitcoin might be open to more declines in the coming weeks. None of this is certain, but our opinion is that we might see more declines in the medium term.

Our previous remarks remain in place. This means that the situation is still quite tense. We might have already seen a short-term move to the upside and Bitcoin might decline from here but this is still far from certain. It wouldn’t surprise us to see another short-term move up but the medium terms seems to be clearer at this time with the outlook being bearish. And so, we maintain our hypothetical short position as the whole picture is definitely more bearish than bullish.

If you have enjoyed the above analysis and would like to receive free follow-ups, we encourage you to sign up for our daily newsletter – it’s free and if you don’t like it, you can unsubscribe with just 2 clicks. If you sign up today, you’ll also get 7 days of free access to our premium daily Gold & Silver Trading Alerts. Sign up now.

All essays, research and information found above represent analyses and opinions of Mike McAra and Sunshine Profits’ associates only. As such, it may prove wrong and be a subject to change without notice. Opinions and analyses were based on data available to authors of respective essays at the time of writing. Although the information provided above is based on careful research and sources that are believed to be accurate, Mike McAra and his associates do not guarantee the accuracy or thoroughness of the data or information reported. The opinions published above are neither an offer nor a recommendation to purchase or sell any securities. Mr. McAra is not a Registered Securities Advisor. By reading Mike McAra’s reports you fully agree that he will not be held responsible or liable for any decisions you make regarding any information provided in these reports. Investing, trading and speculation in any financial markets may involve high risk of loss. Mike McAra, Sunshine Profits’ employees and affiliates as well as members of their families may have a short or long position in any securities, including those mentioned in any of the reports or essays, and may make additional purchases and/or sales of those securities without notice.