ValueWalk
Home Business The Best Income Stocks According To BoA 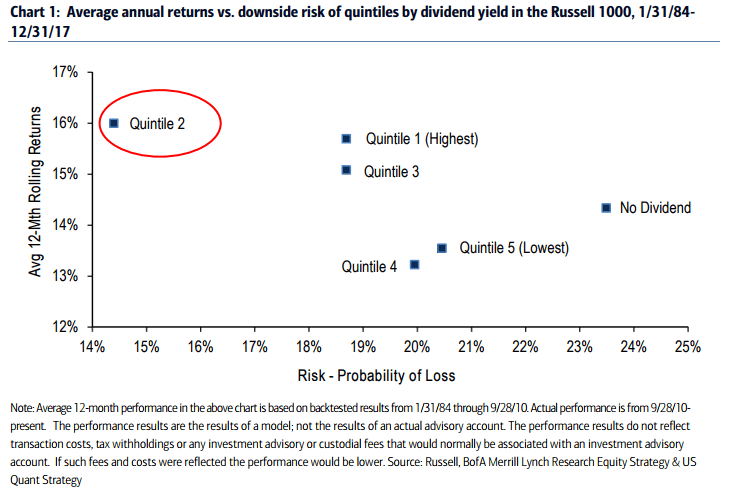 Dividend investing is a challenging sport. Trying to find the market’s best income stocks is a complicated process not least because those stocks with the highest yields, tend to produce the worst long-term returns.

The best research on this can be found in the research paper High Yield, Low Payout, compiled by Credit Suisse analysts Pankaj N. Patel, Souheang Yao and Heath Barefoot.

To try and figure out which income stocks investors should be spending their most time on, these analysts simulated a dividend strategy from January 1980 to June 2006, limiting their universe to stocks within the S&P 500. They separated the stocks under consideration into equal-weighted decile yield ‘buckets’ to figure out which produced the best returns.

The Best Income Stocks For 2018 per BAC

Analysts at Bank of America use a similar ranking system to try and uncover the best income stocks in the Russell 1000. Each month the bank's quant analysts calculate the trailing 12-month dividend yield for each company in the Russell 1000, this dataset is then ranked in Quintiles. The best-performing of these is Quintile 2, which has produced a five-year annualized return of 15.1% since inception at the end of September 2010. [Rebalancing and performance calculations are conducted each month, and the performance of each quintile is computed on the basis of equal-weighted total return. Dividends are not reinvested.]

Going back to 1984, as far as BoA's analysts have backtested the model, quintile two has produced an average 12-month rolling return for investors of around 16%, with a probability of loss of less than 15%.