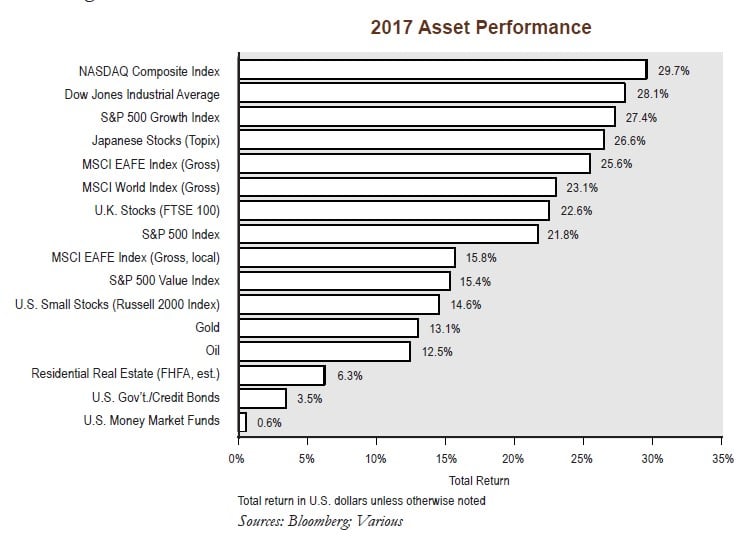 A young man just got his driver’s license and was quite proud of it. Immediately he thought of all the places he wanted to go and the friends he wanted to drive around with. Somewhat timidly, he approached his father – a minister – to discuss the use of the family car. With a serious (almost stern) look, the minister said:

“I’ll make a deal with you. You bring your grades up, study your Bible more and get your hair cut. Then we’ll talk about it.”

A month later the boy excitedly approached his father again. He inquired about the possible use of the family vehicle.

“Son, I am very proud of you. I guess you’ve always had the capability, but needed a bit more motivation. You have successfully brought your grades up and you’ve studied the Bible. But you didn’t get your hair cut!”

“Yes, you are correct and I appreciate your study of history,” the father replied. “… and they all WALKED everywhere they went! ”

A few weeks (and a little hair trim) later and the young man got to drive the family car when it was not otherwise in use. Having waited his entire young life for this privilege, he did not want it to be taken away. So he drove very carefully, stayed under all speed limits, stored his phone properly out of sight while driving and purposefully avoided potholes.

“Wow, these potholes are everywhere! ” he thought as he continually swerved to miss one after another (all while trying not to swerve into other vehicles). He remembered his father recently having to replace multiple tires and even a rim once as driving directly into a large pothole can cause quite some damage. “Why so many of these? I don’t remember them being literally everywhere while growing up,” he thought.

Indeed, today, many large cities are chock full of potholes. Surely streets in cities with severe and/or changing weather are hard to keep perfectly repaired. But even larger cities in fairweather states (Los Angeles comes to mind) are like minefields full of potholes. Smaller cities (like that in which the young man grew up) seem to have fewer such automobile obstacles. Even those mid-sized cities that neighbor the worst offenders can be much better, from a road maintenance perspective. Studies have shown that it is not just money spent or the wealth of the city that causes this disparity. Something else is at work.

The above map of the United States depicts the worse “offenders” in terms of road quality. While not specifically shown, the reason for the worst states is a few very large individual cities contained within. Thus, Los Angeles and San Francisco within California, New York City within New York State, Boston within Massachusetts, etc. take their entire states “down” with them.

Why is this, and what investment lessons may be learned? How may we assist the young man in reducing the number of potholes he must swerve to avoid?

Neither Too Big nor Too Small

In the April 2004 edition of a Quarterly Report entitled “The Middle Seat,” the author discussed the increasing bifurcation of U.S. business and the economy. While the “poor” were getting “richer” at that time, the “rich” were gaining at a faster pace. Thus, products and services that catered to wealthy folks, as well as to those with more limited means, were both gaining market share. The “stuck in the middle” products, however, were doing as poorly as the “middle seat” of an airplane. Our observation this quarter is juxtaposed with this view.

While the Gini Coeffi cient (that which measures income equality) continues to show greater inequality – in the U.S., but not for the world as a whole – we have found that being very large or very small can have its disadvantages. The road quality map above shows that, for the most part, the largest U.S. cities, coast-to-coast have the poorest-quality roads. We believe there may be a certain disadvantage to size above a certain threshold.

The smallest cities generally lack the services available to larger ones. But the largest cities, despite what one may think about “economies of scale,” actually have poorer service (and roads) than their middle-sized brethren. Perhaps above a certain size and the complexities overwhelm the economies? Perhaps above a certain size and the sheer volume of services (including pothole repairs) required is not practical in a 24-hour day/7-day week? Perhaps more people bring with them more graft?

We shall continue to learn more about this topic as we now share some of our parallel thinking regarding investments.

We have observed that just as the largest cities seem to have dis-economies of scale, so too may the largest companies. On the other hand, the smallest companies often lack the resources required to compete, so larger (just not necessarily the largest) firms often display increasing market shares combined with improving margins. A few examples:

Most very small companies remain that way indefinitely. Yes, we all hear of the success stories, but there are literally thousands of others that barely hang on while a few thrive. This is why smaller company equity managers can add a lot of value as they identify tomorrow’s winners from the flocks of today. Mid-size to larger companies may be in the sweet spot of “big enough” to effectively compete, while not too big to fall prey to the shortcoming of enormous size. The very biggest companies, while all with formidable competitive advantages, should, we believe, do better than history would suggest.

Perhaps just like the biggest cities, the biggest companies are held back by their sheer size? Perhaps they get “protective” of their current products rather than aggressively look to cannibalize themselves with new offerings? Perhaps they get lethargic, complacent or lose talent to smaller upstarts? For these possible reasons, and many we surely have not captured herein, we shall be extra careful when evaluating the largest businesses in all sectors, in many cases preferring to invest in the merely large instead of the biggest.

We have to go back to 2006, in a quarterly report entitled “Little Boxes,” to produce a yearly asset performance chart with positive numbers in every category presented.

“This is the fi rst time in many years we’ve seen this.” The “this” that Fed Chairperson Janet Yellen referred to, explaining her third rate hike of 2017 on December 13, was a global synchronization of expanding economies. For this reason, amongst others, we have been witnessing a rise across the board of global asset prices of most types.

As shown in the chart above, last year produced stellar results n just about every asset class. This, after several prior years of positive results, and one may begin to ask the question of sustainability. The U.S. economy is entering its ninth year of expansion, equities around the world continue their ascent, commodity prices (as evidenced by gold and oil) are rising, real estate prices are making new all-time highs in many regions, etc. Indeed, expansion appears broad based.

Even though broad, some asset categories are rising faster than others. Most U.S. equities rose, yet  internetrelated companies in “growth” categories performed best. International equities rose substantially as measured in U.S. dollars, aided by a rise in the value of many foreign currencies – the Swiss franc rose about 4%, the ¥en gained about 5%, the €uro advanced more than 14%, while even the British pound (in the throes of “Brexit” discussions) rose 9%. Continental European economies, while slower to recover from the global financial crisis, are clearly doing so now. As measured by GDP, bank lending and real asset prices, Spain, France, Germany and others are close to where they were pre crisis. Most of the European equity markets are reflecting this.

Within the U.S. stock market, it worries us somewhat that the acronym “FANG” (standing for four e-commerce and social media companies) has some parallel to the “nifty fifty” of yesteryear. Back then, too, a small number of companies dramatically outperformed all others. Sometimes, in a world partially driven by “greed,” rising prices are, themselves, a catalyst for future increases.

Another asset trend “du jour” is that of investing away from individual securities (FANG perhaps an exception) and, instead, purchasing index funds, often in the form of iquid electronically traded funds (ETFs). But the following graph shows that, while this phenomenon came literally out of nowhere about fi fteen years ago (the red curve shown below), and is growing quite rapidly, ETFs still represent only ~10% of all U.S. corporate equities outstanding. 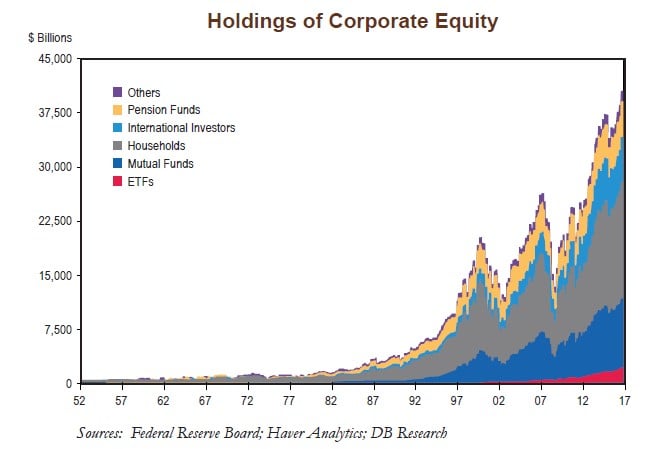 The remainder of the graph above shows the proportion of equities owned as remaining relatively constant over the past twenty years – even as their absolute values rose. Mutual funds have taken some share, but households remain the owners of greater than 50% of corporate equities.

Some believe that we may be nearing the time of a “bubble” in certain asset classes. ETFs are perhaps too nascent, but cryptocurrencies (such as Bitcoin), artworks such as the auction shattering “Salvator Mundi” (Leonardo da Vinci’s work that sold for $450.3 million, including fees), Vancouver, Toronto, and Malibu residential real estate, and even antique automobiles are all being sought after even though now at (or far beyond) all-time record prices. We are mindful of these trends.

If bubbles develop in some areas, is that necessarily a prelude to the “end game” of all asset prices? Are we to have “rolling” corrections (typically a healthy solution) or will there be “contagion” to others? We cannot know the answer to this question but are mindful of its consequences.

We would now like to highlight a recent addition to Aristotle Capital equity portfolios:

There remains the pervasive view that higher infl ation is inevitable, perhaps just around the corner; with that would likely come higher interest rates. While we, too, have seen the evidence of this – including tighter labor markets, sustained monetary and fiscal “loose” policies and even higher commodity prices of late – the Phillips Curve has just not seemed to work for quite some time. While there is often a short-run tradeoff between unemployment and inflation, it has not been observed in the long run. Japan (and other countries) is a classic example of inflation barely positive while its labor market continues to tighten even beyond what may be considered as “full” employment. The Phillips Curve would argue otherwise.

This past quarter, the Federal Reserve (Fed) raised short-term interest rates by one-quarter of a percent. It was the third interest rate increase of the year and the fifth (each by one-quarter percent) since rates were almost zero in 2015. The Fed Funds target rate ended 2017 with an upper limit of 1.50%. The new Fed Chairman, Jerome Powell, was appointed last quarter and is expected to take over from Janet Yellen during the fi rst quarter of 2018. Ms. Yellen is expected to retire. 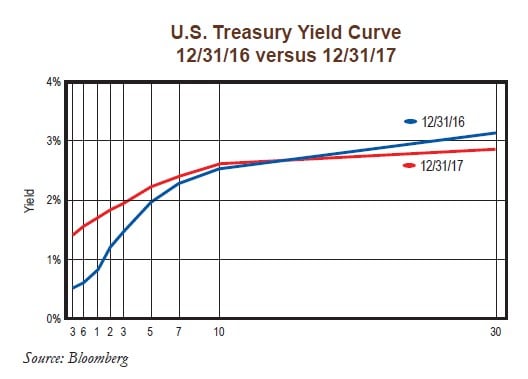