Local New Jersey governments could experience a double whammy. Not only will the currently passed national tax reforms in the form of the Tax Cuts and Jobs Act of 2017 potentially diminish New Jersey’s tax base of wealthy residents, but a critical arbitration cap that kept municipal costs in line with the government’s revenue is now also gone. Moody’s, for its part, doesn’t like how this situation is playing out for municipal bondholders. JPMorgan’s Michael Cembalest had previously said the state’s bond problem is “not mathematically solvable” graphing the following scary chart:

Categorizing the recent elimination of a 2% arbitration cap on police and fire salaries “credit negative for all local governments,” a January 4 Moody’s report benchmarks the moment that government revenue is being de-linked from spending.

The current system institutes a limit on salary increases for police and fire employees “effectively tying the salary increases to the municipality’s or county’s revenue-raising capabilities.”

That could be gone if the change is allowed to take place, Moody's pointed out.

The 2% arbitration cap was a critical point of leverage used by municipal officials to keep local costs in line.

While the precise mechanics of the arbitration cap had various complexities, its essential nature was quite simple. Whenever a local government entered into binding arbitration with a public safety (police and fire) collective bargaining unit, the arbitrators were not permitted to award more than a 2% annual increase in base salary.1 Even when salary negotiations did not go to arbitration, the mere fact of the cap’s existence was a valuable tool in contract negotiations. Union negotiators were forced to consider smaller increases lest the alternative be a mandatory 2%.

Without arbitration cap, local government "in a bind."

During contract talks, municipal officials are known to battle with powerful local service unions, who wield meaningful influence through their campaign donations and threat of a work stoppage.

“Without the cap, local governments are in a bind,” Moody’s noted, making the assumption elected officials would likely lose in a showdown. “Because locals are bound by the property tax cap, any expenditure growth greater than 2% must come at the expense of some other portion of the budget or from reserves unless the tax base is expanding sufficiently to make up the difference.”

Property taxes in the state are already among the highest in the nation and it will be hard to raise them without backlash from financially burdened voters.

If the cap is permanent, the impact could occur over time and “ultimately, the loss of the arbitration cap is likely to cause the sector’s credit quality to deteriorate.”

Moody’s did not analyze the potential for elected officials to win at negotiation with the unions, but rather referred to a “degree of deterioration will depend on the idiosyncratic qualities of the given community.”

From a budgetary standpoint, salary costs are among the largest expenses of a municipality. As costs have risen, so, too, have taxes.

A September Police and Fire Public Interest Arbitration Impact Task Force report noted that municipal property taxes increased an annual average of 7.19% for the five years before the cap. Compare this to the 2.41% in the five years following the cap’s 2011 implementation and the implications for local politicians are clear. Taxpayers saved $429 million collectively due to the cap, the report noted. 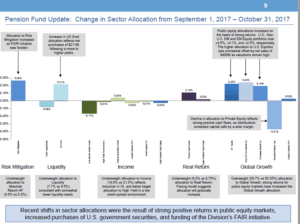 The cap is not a Fait Accompli, however.

Democratic Governor-elect Phil Murphy can support permanently extending the 2% cap on police and fire salary increases, which are often used as a benchmark for other municipal employees.

“For county governments alone that cap has effectively managed the growth of over a billion dollars worth of public safety employee salaries each year,” Heather Simmons, president of the New Jersey Association of Counties, was quoted as saying.  “Using interest arbitration as leverage for negotiating more lucrative contracts has no longer been a viable option.”

On a related note, Christie just signed pension legislation at the time of this writing calling for "requiring stress tests, fee transparency at state pension funds".

If that is indeed the case, look for the financial situation of the state to deteriorate further. 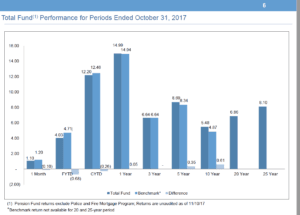