A growing number of analysts are boosting their price targets for Amazon.com, Inc. (NASDAQ:AMZN) stock to $1,400 or even higher, and this morning we have another one. This time the analyst cited Amazon’s wallet share, adding that the online retailer has a massive opportunity to gain an even greater share of consumers’ wallets.

There’s been quote a lot of talk about Amazon’s wallet share these days, especially as the company takes aim at product categories in which it can be more difficult to convince shoppers to buy online instead of at a brick-and-mortar store. In order to gauge Amazon’s wallet share, Piper Jaffray analyst Michael Olson conducted a survey of 1,000 U.S. Internet users and found that use of Amazon has been “far more sparingly than many would expect.”

In fact, after comparing total holiday retail spend in the U.S. to his estimates for Amazon’s gross merchandise volume, he found that the retailer’s penetration rate could be merely in the low-to-mid single digits.

Olson estimates Apple’s gross merchandise volume for the fourth quarter at $42 billion, and he believes that about 80% of that was generated in November and December. He added that this suggests Amazon’s wallet share amounted to just 4% of the $923 billion in overall 2017 domestic retail holiday spend estimated by eMarketer.

Because the U.S. is Amazon’s biggest market, Olson sees this low percentage for Amazon’s wallet share as a “significant positive” because it leaves plenty of room for growth. As a result, he boosted his price target for Amazon stock from $1,200 to $1,400, putting his target in line with those of Credit Suisse and Citi. To come up with his new price target for Amazon stock, Olson raised his target multiple from 15 times to 18 times estimated 2019 EV/ EBITDA, which he feels offers a better picture of the company’s growth outlook.

He also complied this graph showing how Amazon’s EV/ EBITDA multiple of 18 times compare to those of other companies, matched with each one’s gross profit growth outlook. 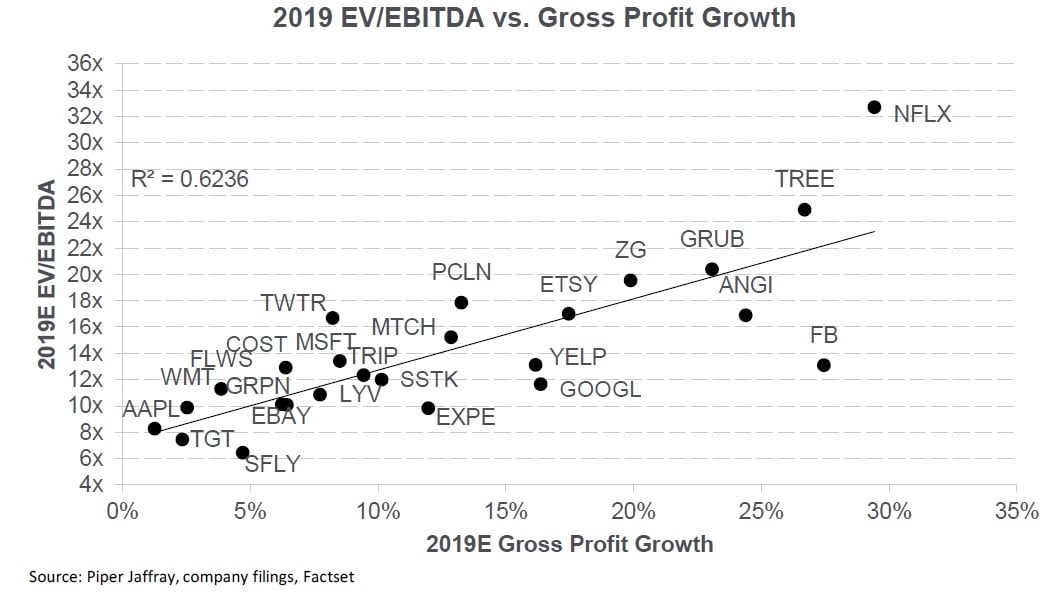 Amazon stock was little changed in morning trades as it hovered around $1,246.29, just below its opening price on Tuesday.