Last month I shared in Outside the Box (subscribe here) a new McKinsey report on job automation. Every year, reports like this reflect a process that’s occurred many times in human history.

People discover or invent something useful: fire, the wheel, iron, gunpowder, coal, oil, the steam engine, electricity, the automobile, the airplane, the computer, etc. Life changes as the new knowledge spreads. People either adapt or they don’t.

Those who don’t adapt fade into the background. In the last few decades of their working lives, they end up taking the very lowliest of jobs in order to get some food, clothing, and shelter, but it’s not a comfortable life.

There was no government safety net for most of our history. But most people tried hard to adapt their skills to the new changes. And as we adapted to radically disruptive inventions like the steam engine, automobile, and computer, hardly anyone had the necessary skills, and so everyone had to learn.

15% of men between the ages of 25 and 54—who should be in their most productive years of contributing to their families and society—don’t even want a job. That’s up from 5% in the mid-’60s, and the number has been steadily rising.

56% percent of these people receive federal disability payments, averaging about $13,000, which is roughly equivalent to the pay for a minimum-wage job, after taxes – except that disability comes with free Medicare. Unless these people find ways to develop needed skills, there is not much financial incentive for them to look for jobs.

The rest of the people who don’t want jobs are mostly early retirees, homemakers, caregivers, or students. And roughly 1/3 of the 10 million+ men who have dropped out of the workforce have criminal records, which is often a barrier to work.

Only about 3–4% are actually discouraged workers who might take a job if a job is available. That picture should be worrying.

It is one reason why GDP has not increased all that much. Remember that GDP is proportional to the number of workers available times their productivity. Taking 10 million workers out of the workforce reduces GDP.

Automation Will Take Away Part of Everyone’s Job

The problem for most of us now is that we don’t want to be replaced like so many people in each major technological shift. Yet new knowledge spreads around the globe now in seconds instead of centuries.

It’s easy to feel that the walls are closing in, because for many of us they are.

The McKinsey report makes that crystal clear. They project that technology will replace as many as 800 million workers worldwide by 2030. Displacement is not just a US or developed-world phenomenon. It will show up in the emerging and developing markets as well.

McKinsey draws a distinction that we should all remember. The problem is less about jobs disappearing than about the automation of particular tasks that are part of our jobs.

In most cases, employers can’t simply fire a human, plug in a robot, and accomplish all the same things at the same or better performance level but lower cost. You have to zoom in closer and look at the tasks that each job entails, and ask which of them can be automated.

In other words, whatever your job is, some part of it will likely get automated in the next decade or so. That might be good news if the machines can take on the repetitive drudgery that you don’t enjoy.

Automation could free you to do things that are more interesting to you and more valuable to your employer. But outcomes are going to vary widely.

Everyone Is at Risk

Here’s a chart on sector and occupation employment shifts from McKinsey. (The circles on the right are the translation of those task-hours into numbers of workers.)

In their rapid automation scenario, by 2030—just 12 years from now—73 million people out of a workforce of 166 million will have been displaced, with 48–54 million of them needing to change occupations completely.

In other words, a full third of the workforce may have to change career fields. That’s going to be a problem.

Yes, Americans change jobs more frequently now than they used to, but the changes tend to be evolutionary: We gain new skills, find a better place to apply them, acquire new contacts, seek out new opportunities, and so on.

The personal transformation happens slowly enough to be manageable. That’s going to change.

My friend Danielle DiMartino highlights another of the amazing charts in the McKinsey study, one that analyzes US job-market susceptibility to automation scale: 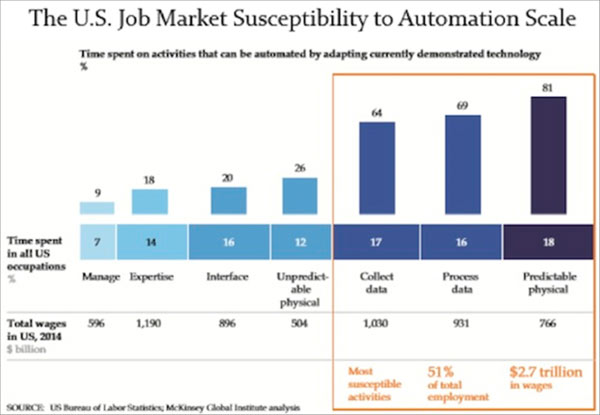 This chart demonstrates that it’s not just the low-skilled workers who are at risk. It’s also mid-level and even some high-level people.

There is more job risk than many of us imagine. That is why I break the world up into the Unprotected, the Protected and the Vulnerable Protected classes. The latter group doesn’t even realize their vulnerability.

If you think you’re safe because you aren’t an assembly-line worker or a retail cashier and don’t work at the level of rote repetition, you could be wrong.

Recently I ran across an artificial intelligence story that’s almost terrifying. You might have heard about AlphaGo, the AI system created by Google subsidiary DeepMind. It plays the very complex board game called Go.

This year, DeepMind introduced AlphaGo Zero, a new system that quickly acquired the same skills with no human help at all. The programmers simply gave it a blank board and the rules of the game. It then played millions of games against itself.

Systems like that are coming for your job. So if you think you’re safe because you aren’t an assembly-line worker or a retail cashier and don’t work at the level of rote repetition, you could be wrong. These systems will only get better and take on ever more complex jobs.