Nine months ago, in the early days of what has been an incredibly volatile presidential administration, we put out the Trump Tracker to keep track of what companies were saying about President Trump. Today, as the world goes crazy for cryptocurrencies, the Sentieo team is excited to introduce the Crypto Tracker. It’s a bot that constantly scans new public financial documents for mentions of cryptocurrencies and blockchain technology. These documents include all SEC filings, earnings call transcripts, investor presentations, press releases, and more. The bot instantly surfaces new mentions of cryptocurrency as soon as they’re published, while intelligent queries automatically sort them into topics like bitcoin, ripple, ethereum, ICOs and more.

Anyone interested in following the cryptocurrency impact on public companies can engage with the Crypto Tracker by checking the dedicated website, following the @cryptotrackerbot Twitter account, or signing up for a daily email alert on the site.

Is Cryptocurrency Just a Bubble?

Some experts believe in the truly disruptive power of cryptocurrency, including MIT researchers who argued earlier this year in a Harvard Business Review article that “[blockchain] will do to the banking system what the Internet did to media.” However, other prominent financial leaders have called bitcoin a “bubble”, including Ray Dalio (who runs the largest hedge fund in the world), Jamie Dimon (who runs the largest bank in the US), Warren Buffett (the fourth richest person in the world), and Robert Shiller (Nobel-prize winning economist).

We’ve been keeping our eye on cryptocurrency using our research platform, Sentieo. For example, we used Sentieo Document Search to search mentions of cryptocurrency and its synonyms across earnings call transcripts and press releases over the last two years. Then we used Plotter to quickly graph these mentions so we could easily see trends. Mentions have steadily increased over time, with a huge spike during the week of November 27th, when Bitcoin’s value reached a high of $9,721 and was worth more than seven times an ounce of gold. Since then, it has been a crazy ride, and companies continue to talk about cryptocurrency in filings, transcripts, and press releases. 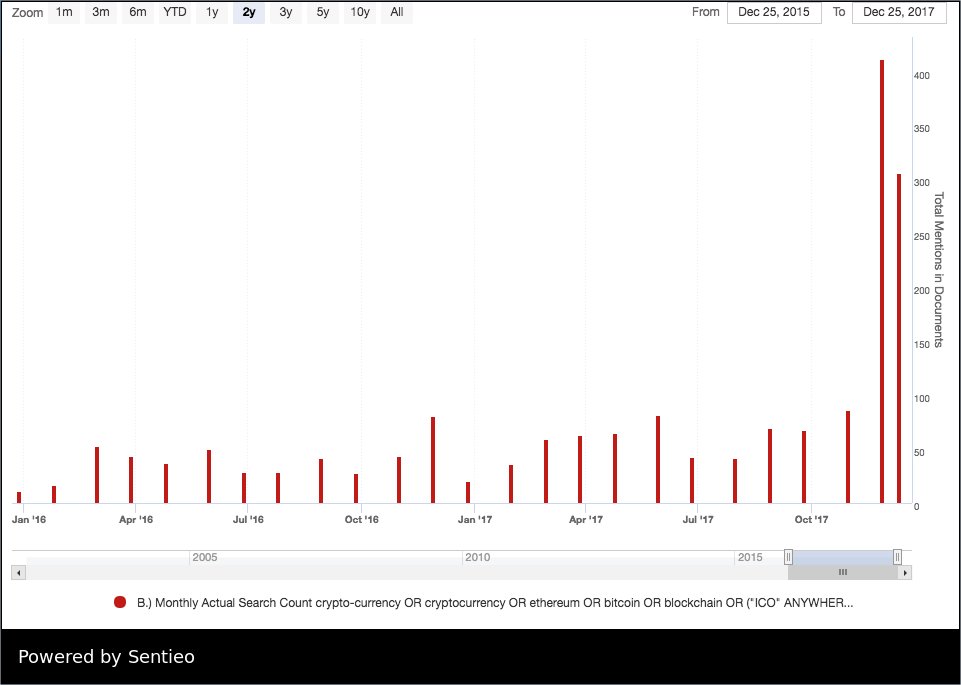 The cryptocurrency leaders are constantly changing, with the top 5 or so surpassing and falling behind each other depending on the day.

Bitcoin is likely the most well-known cryptocurrency, released first as an open-source software in 2009 by an unknown person (or group of people) with the alias Satoshi Nakamoto. Bitcoins can be used to make purchases anonymously. They are not tied to any country, nor subject to regulation, making international payments with Bitcoin simple to execute and inexpensive.

LiteCoin describes itself as a peer-to-peer Internet currency that enables instant, near-zero cost payments to anyone in the world. It is an open source, global payment network that is fully decentralized without any central authorities. It was also released as an open source software in 2011 by former Google employee, Charlie Lee.

Ethereum is a decentralized platform that runs smart contracts: applications that run exactly as programmed without any possibility of downtime, censorship, fraud or third party interference. These apps run on a custom built blockchain, a shared global infrastructure that can move value around and represent the ownership of property. Ethereum was initially proposed in 2013 by Vitalik Buterin.

We used Sentieo to graph the price increases of Bitcoin, Litecoin, Ethereum, and a fourth currency called Ripple over the past year. Towards the end of November and into December, each currency spikes so rapidly the graph is hard to read. Cryptocurrencies are growing so fast that “exponential” doesn’t even appropriately describe the growth rate.

We also used Sentieo Mosaic to look at the popularity of Bitcoin, Litecoin, and Ethereum over the past year as expressed by Twitter Mentions and Google Search trends. This graph also becomes unusable toward December due to rapid growth, but Sentieo users can drill in further to find correlations between these trends and crypto prices. 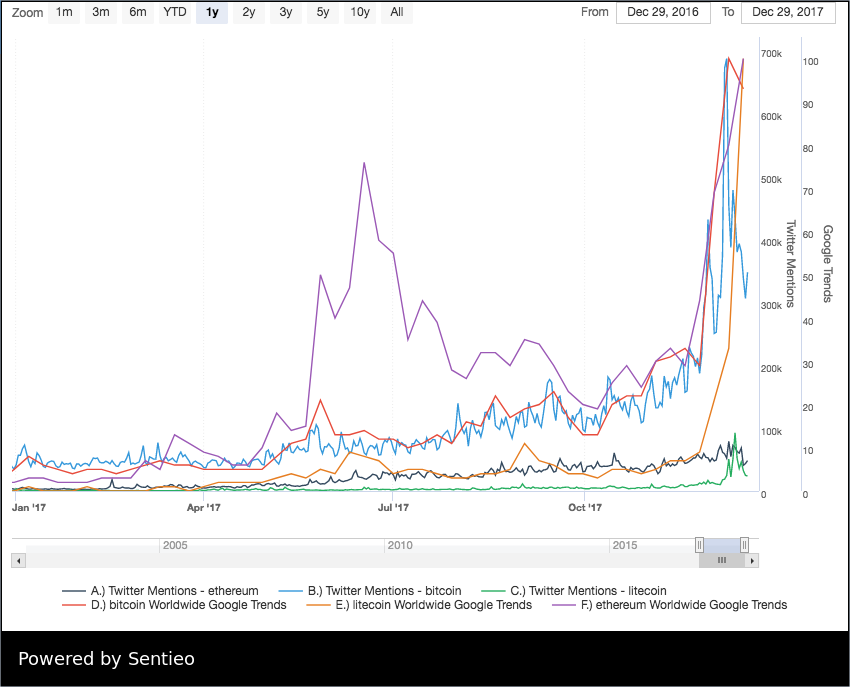 We’ll be continuing to get updates from the Crypto Tracker through the end of the year and 2018, to see if crypto is just a bubble — and if so, when it will burst.