Bill Gates said that “the Internet is becoming the town square for the global village of tomorrow.” He’s right, but that doesn’t mean that internet is affordable everywhere yet. We recently came across a report showing that broadband access in the Southern Hemisphere is more expensive than the north. It also showed that some countries have mind-blowingly expensive internet and that highly affordable internet can often be found in the most surprising places. (The world’s cheapest internet can be found in Ukraine – and Iran!)

In North America, things are pretty consistent. You can move around the continent without too much variation in internet costs. Of the NAFTA nations, Mexico is the cheapest. The average cost of broadband internet there is only $26 per month. On our visualizations, we clumped the Caribbean in with South America, except for the Bahamas and Bermuda. Internet in the Bahamas ($77) is $11/month more expensive than in the U.S.A ($66). Bermuda’s monthly average is over $126/month. 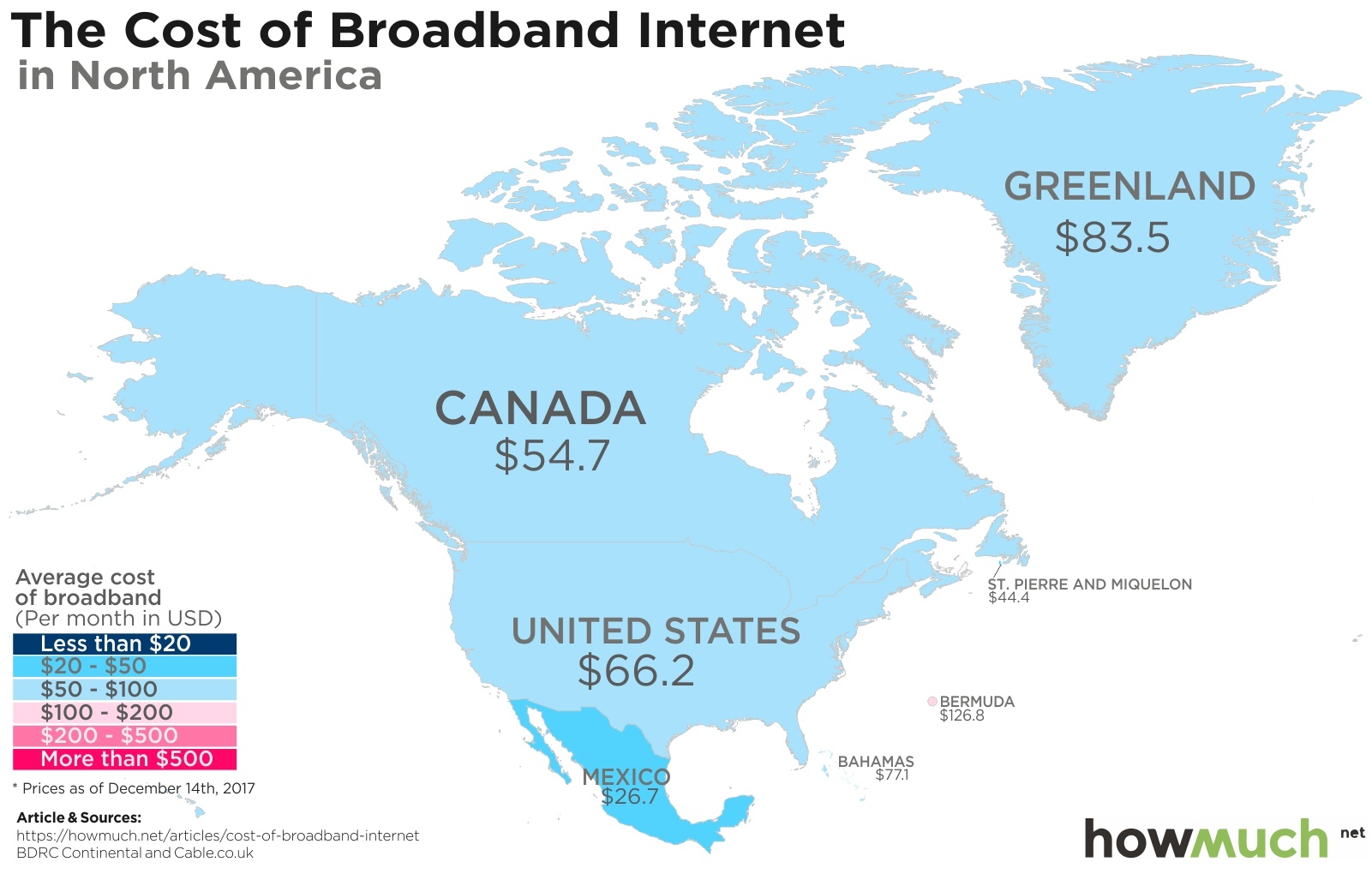 This map contains 44 countries and territories. Overall, internet here is pretty affordable. On the South American mainland, internet prices average just over fifty bucks monthly. The islands, however, have remarkably inconsistent pricing. Some have internet costs 2-3x that of their immediate neighbors. For instance, the Dutch side of Saint Martin (Sint Maarten) has a monthly average of $73, while the French side’s is only $20! 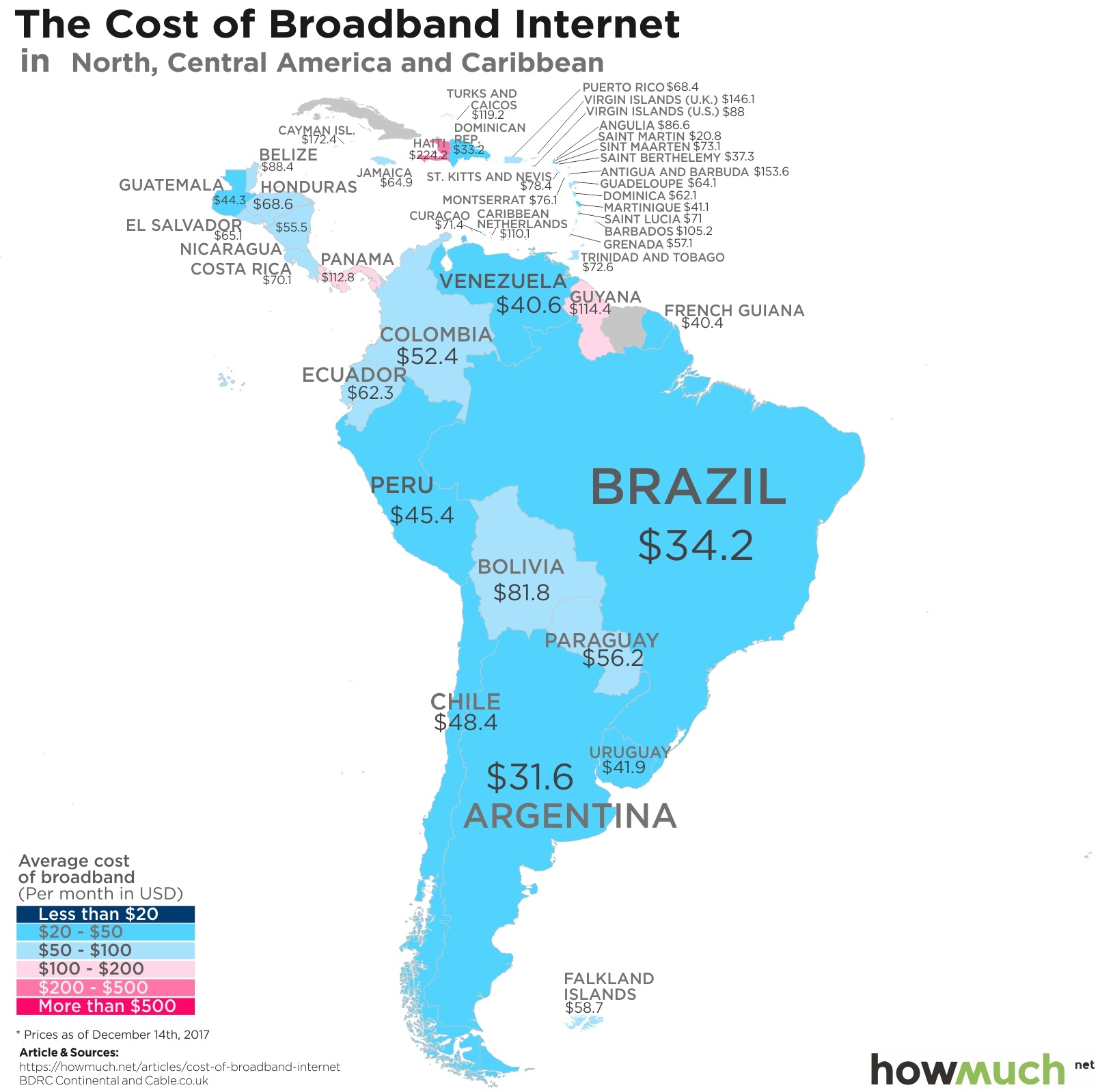 Overall, the world’s largest continent has very affordable internet. Notably, China and India offer their 2.7 billion combined residents broadband for less than $40/month, on average. In a few Asian countries, such as Brunei and Laos, internet costs skyrocket to roughly $250/month, but these are the exceptions, not the rules. Elsewhere, broadband costs are more in line with the Americas. Extremely cheap internet is provided in Russia ($10), Syria ($12), Kazakhstan ($13), and Iran ($5.40). These countries are reminders that a reputation for technological advancement does not necessarily result in the most affordable internet. 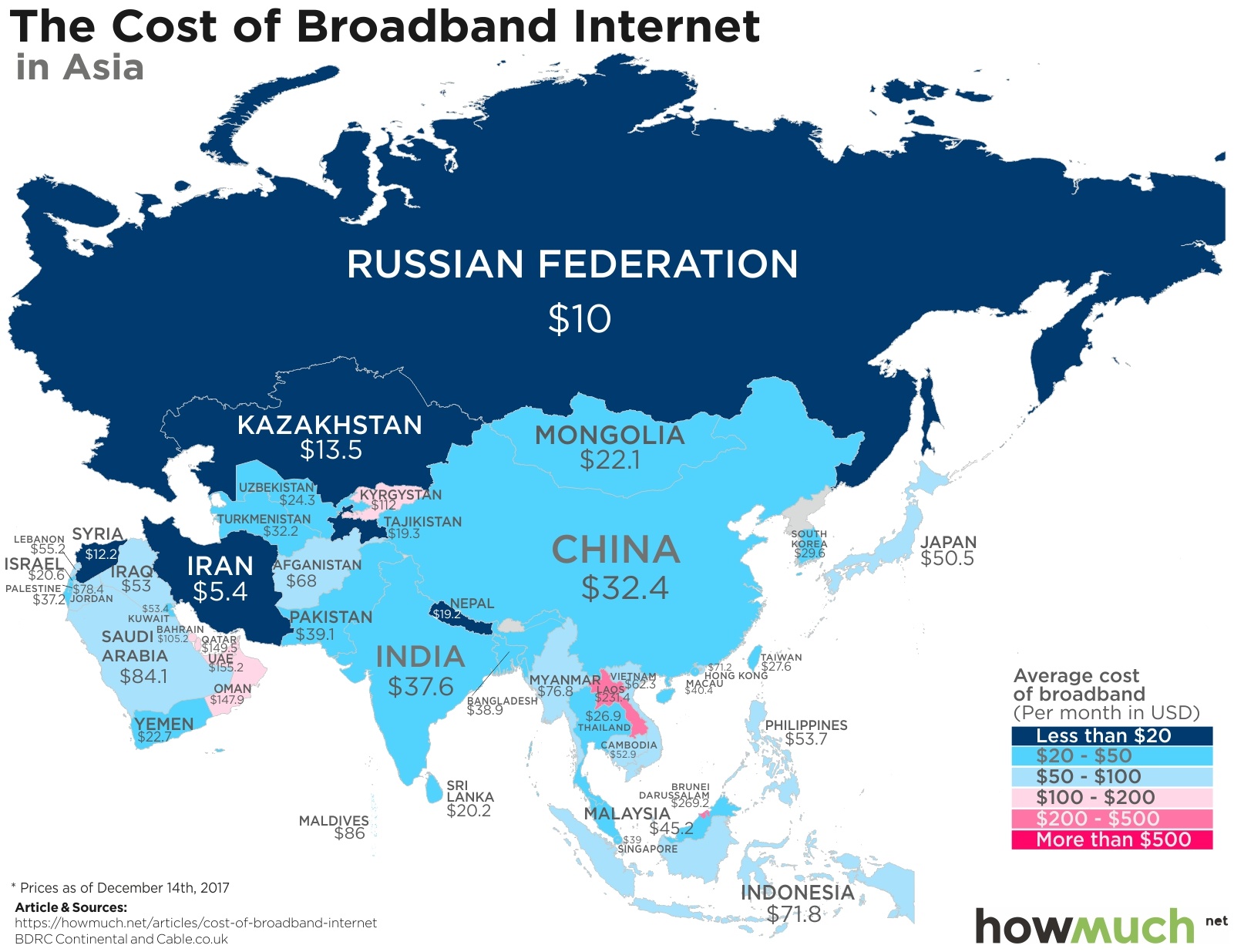 Overall, Africa is the worst place to have internet access. Many countries didn’t even have data to review. The original report says: sub-Saharan Africa fared worst overall with almost all of the 31 countries measured found in the most expensive half of the table, 16 of them in the most expensive quarter. The extremes are huge. In Egypt, broadband costs less than $15 monthly, but in Namibia it costs over $450. In Burkina Faso, the priciest of all, internet costs an astonishing $963 per month! On the other hand, a spacious apartment in the country’s capital will only cost you about $460/month. 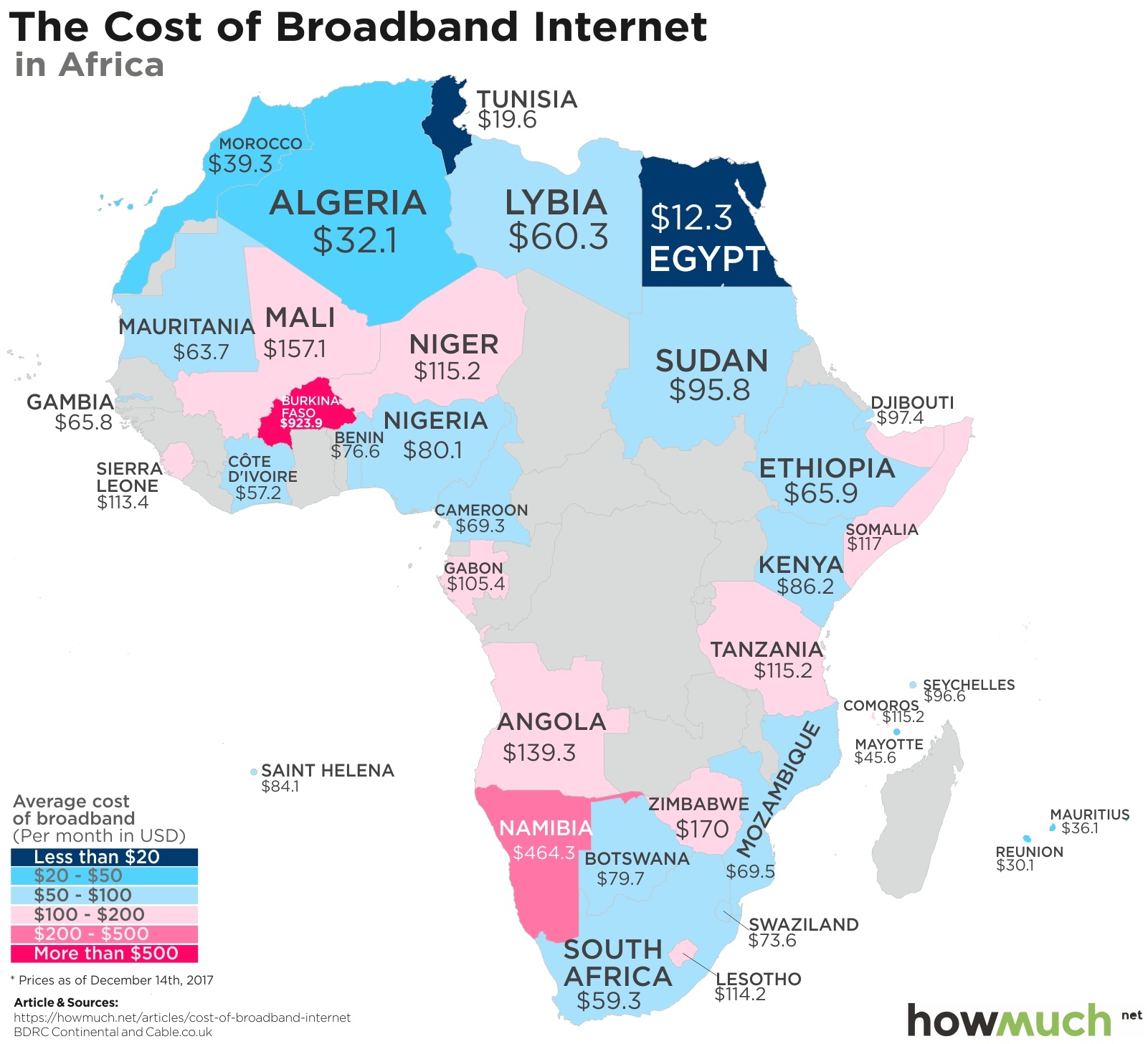 All countries in Oceania are among the bottom half of nations when it comes to internet affordability. Australia ($60) and New Zealand ($65) are comparable to most Western European nations, but the most interesting case in Oceania is Papua New Guinea, where internet cost a staggering $590 each month. A few years ago, internet cost over 225% of the average annual income. Prices are nowhere near that high today. (We found this incredible research paper that explains why.) 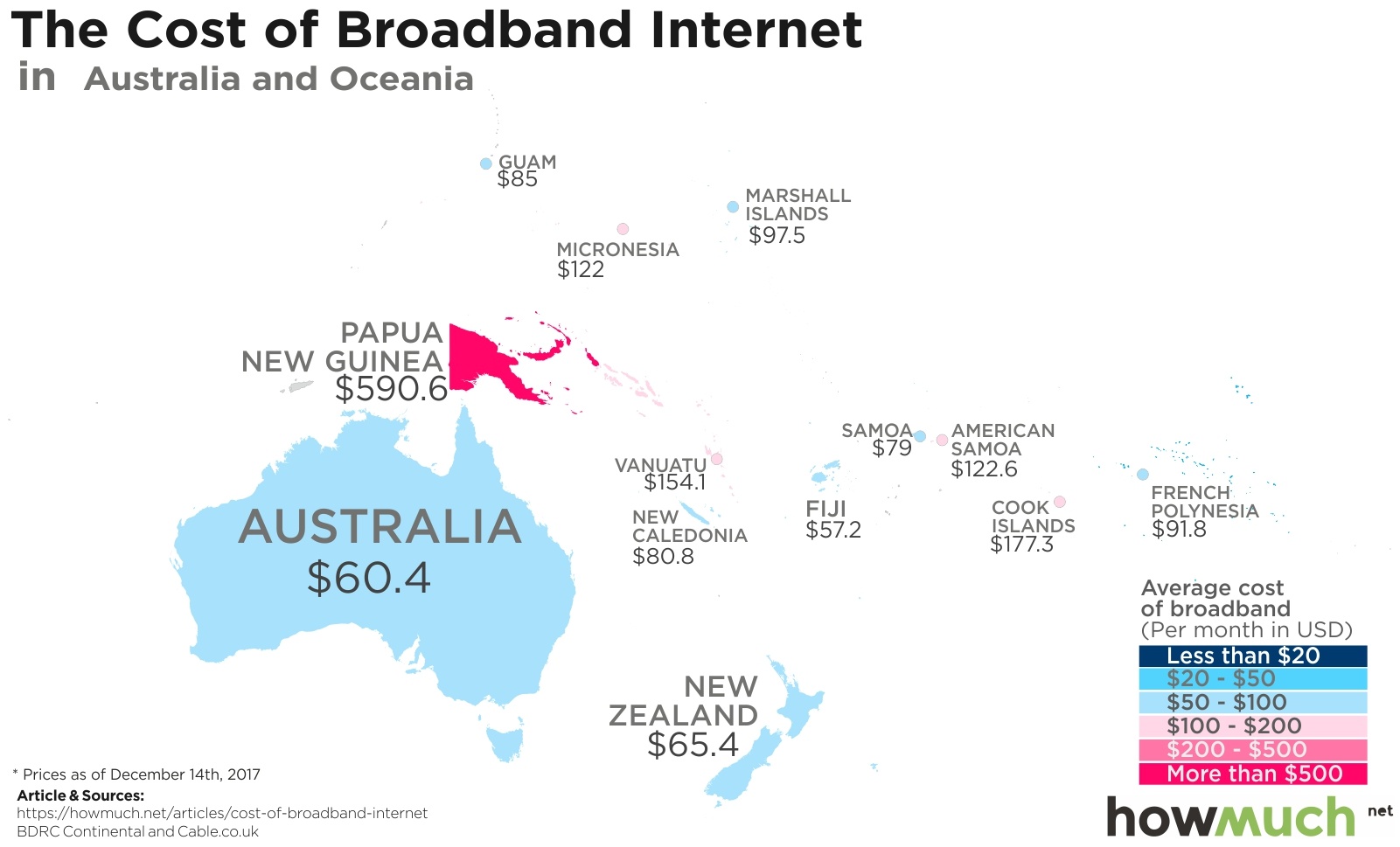 So how much does internet cost in your country?