A few years ago, I discovered Napoleon Bonaparte wasn’t a tiny man. He was around 5 feet 7 inches tall — above average for French folks around the turn of the 18th century.

I was shocked. (Could I still use “Napoleon Complex” accurately?) But it served as a poignant reminder: You have to question everything.

Just because a myth has woven its story into the fabric of society doesn’t make it true. It’s why I spend too much time on fact-checking sites like Snopes.com. I just want to make sure I’m not helping spread misinformation. Plus, I get ahead of the game.

That’s precisely why I enjoy talking to our systems expert, Michael Carr. He’s a wellspring of facts and myth-breaking “did you know?” stories.

Recently, he told me a big trading myth that I want to share today because it’ll put you ahead of the curve in 2018…

Maybe you’ve heard of the January Effect, the calendar-related theory that stock prices (specifically small caps) habitually increase in January. As Mike told me: “The theory is that individuals sell small caps in December to realize tax losses, and then they buy small stocks in January.” That’s why many investors believe the best time to start an investment strategy is in January.

But that widely held belief? A big ol’ myth … at least when you consider the last 20 years.

See, a paper on the January Effect was published in 1988. Once everyone knew about it, the smart money started buying in December instead of waiting for January. In fact, Mike tells me that the smarter money then started buying in early December and even November.

Now December is the best month of the year for small caps with a 78% win rate, while January is one of the worst months at 42%. Look at this chart below to see what I mean. 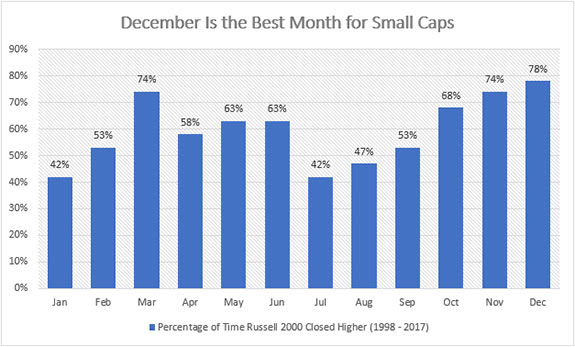 So what can you do with this knowledge?

Use the December Effect to Score Big Gains

When you find a seasonal trend that works, all you have to do is find the right strategy to take advantage of it. For example, Mike recently developed a formula that pinpoints profit windows in stock trends. Essentially, it finds the best entry and exit points, and over the past couple of months, I’ve seen it hand users gains of 89%, 111% and even 336% in less than a week.

And he told me it’s already identified several uptrends for this month. Considering December is the best month of the year for small-cap gains, you can imagine what type of profits can be made using this “profit window” system.

To learn more about how it all works, just click here.

Because unlike all those people who think January is the best time to start a new strategy, you now know that’s a myth. You don’t need to wait for the New Year to start building up your wealth. By understanding that, you’re well ahead of the curve as we close out 2017.