The overvaluation of China’s currency and its bank assets in our view represents the biggest asset bubble of recent centuries. We believe China’s credit imbalance is bigger than the Dutch tulip mania, the South Sea and Mississippi Company bubbles, the US stock market bubble to end the Roaring Twenties, the Japanese real estate and stock market bubble, the Asian Tiger currency bubbles, the Russian currency bubbles, the Dot-Com Bubble, and the US Housing Bubble. Perversely, most money managers and investors are acting as if they are oblivious to the China bubble. We think it is time that they wake up. China has just released the English version of its People’s Bank of China 2017 Financial Stability Report.

Therein, the PBOC just blew the whistle on its own Ponzi scheme. They admitted to it on page 48 where they revealed that the combination of on- and off-balance sheet assets among its banking institutions has exploded to 70 trillion USD equivalent. We believe this is the largest credit explosion in any major country ever relative to GDP, indicating that these banking assets are vastly mismarked, overstated, and masking an enormous non-performing loan problem that renders the Chinese banking system insolvent, more than wiping out all of its equity capital leaving more than one billion Chinese depositors to bear massive losses. China certainly was the growth engine of the world for the last few decades, but at what cost? At this stage, in our view this bubble is as ripe as it gets to burst and lead to global contagion. 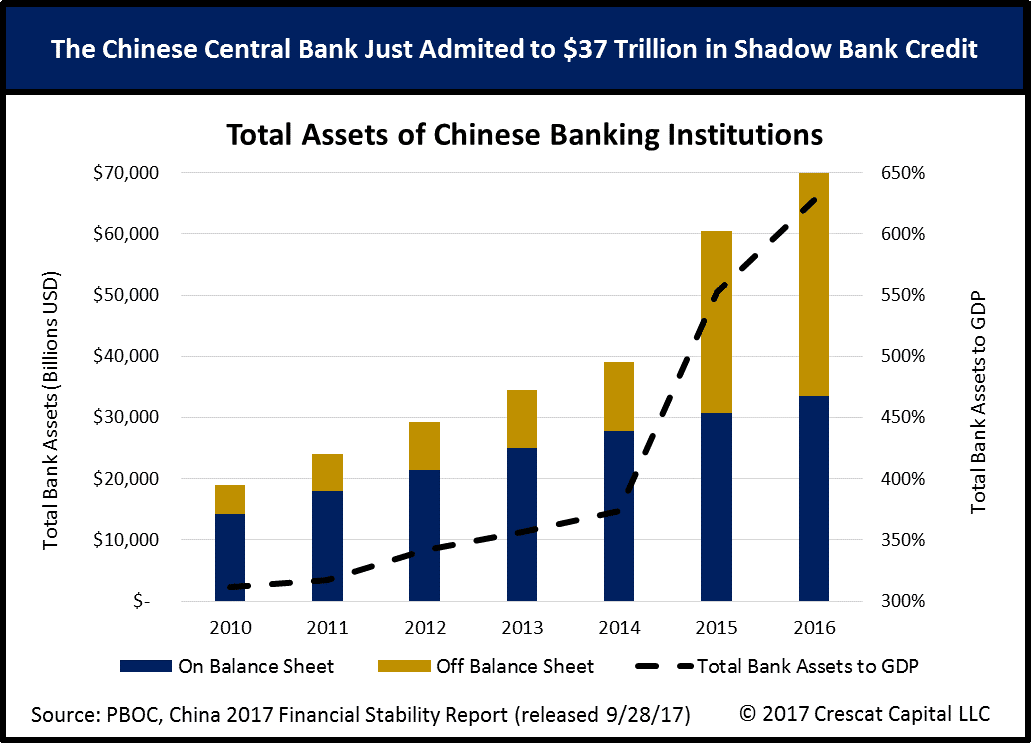 Meanwhile, here in the US, across a broad swath of metrics – price to earnings, price to book, price to sales, enterprise value to sales – the median valuations of US equities are not only the highest they have ever been, but also the highest ever late in a global economic expansion cycle, higher 1929, 1937, 1968, 1972, 2000, 2007. The market environment that has systematically followed these prior valuation extremes has been one of brutal stock market declines of anywhere from 30 to 90 percent and lasting anywhere from one to three years. Today’s bulls say synchronized global growth and low interest rates justify today’s record high multiples. These are the same bulls who are oblivious to the China credit bubble. High global debt-to-GDP levels and low future real growth rates do not justify these multiples at all. What we know is that economic indicators frequently look strong at market tops. That’s because at market tops, the good news is simply as good as it gets and the market is already priced for perfection. Only economic disappointment can follow. For a variety of reasons, we continue to believe that we are in the price and time vicinity of a major market top:

As a hedge fund manager, this is the type of market that we live for. The world is not ready for a bear market, let alone a brutal one. We strongly believe that Crescat and all of our strategies are ready and that we will prudently protect and capitalize.

From a macro standpoint, our hedge funds are positioned to capitalize on the next downturn in the global equity markets, and in particular a China led downturn. For many good reasons, which we have elaborated on in our past quarterly letters, we adopted an equity short bias earlier this year to capitalize on this view. In hindsight, we went net short too soon, and that has hurt our performance year to date.

Our money is right alongside yours and we feel the pain. We remain undaunted. Drawdowns are unpleasant but have been a necessary part of the path to long-term outperformance that has always been our goal. Our performance remains overwhelmingly ahead of the benchmarks net of fees in all of our strategies since inception. This places us in the top quartile among active managers in all three of our strategies, two of which encompass not just one, but two economic cycles with brutal downturns. Our strategies range from eleven to eighteen years of history. This year is not over yet. We remain confident as always that we can get short-term performance back on track, even before year end.

We have been though many bouts of short-term drawdowns in our history. Getting through them by taking repeated calculated risks based on our fundamental model and macro themes has been key to our persistent long-term outperformance over time. Chasing an over-valued momentum market at historic high fundamental valuations late in the business cycle is simply not smart.

That is what passive investing is all about right now in our view. By definition, passive investors will be losers in the next market downturn. We expect them to be the weak hands that will exacerbate it.

Most hedge funds do not hedge very much at all and in aggregate are net long. Very few are net short. Our hedge funds today are net short. When valuations are at record highs and the vast majority of investors are record net long, we get net short. That is just what we do. We are independent. We go with our analysis. We use risk controls to minimize drawdowns. Our goals are to make money, protect capital, and to generate alpha. We are determined to go up when the majority of managers and investors are going down and that is how we are positioned. This obviously has not played out yet this year, but we strongly believe that this environment is very close to playing out.