Remember this moment: Shares of the largest, most well-known technology stocks soared on Friday, pushing the Nasdaq Composite to a record high thanks to earnings results reported Thursday.

Apple (NASDAQ: AAPL) played along thanks to a surge of demand for iPhone X preorders overnight, with the November 3 launch date selling out in just 20 minutes, seemingly eliminating concerns over iPhone 8 demand and Apple Watch LTE issues in one fell swoop.

The result is the largest outperformance for the tech-heavy Nasdaq vs. the S&P 500 since early 2009. Here's a look at the action, the catalysts in play, and how this is all good news for private companies, as many of these players have been on the acquisition path as of late:

Amazon shares finished up nearly 13% on Friday, pushing up and over their late July low and breaking cleanly up and out of a multi-month consolidation range near the $1,000-a-share level. That's enough to make CEO Jeff Bezos the world's richest man, overtaking Microsoft co-founder Bill Gates.

The company reported quarterly earnings of $0.52 per share vs. the penny that was expected. Operating income was a little soft at $347 million vs. the $575 million expected. The Whole Foods Market integration points to a profit margin of just 1.5% for the grocer. And operating free cash flow is slowing as company-wide operating margins fall to just 0.8%, the lowest in three years.

But investors remained focused on the ability of its high-profit Amazon Web Services division (which posted 42% YoY sales growth) to subsidize other areas as well as reports the company has acquired wholesale licenses to acquire and transport pharmaceuticals in a number of states—fueling hype the company is about to take on high drug prices.

That's the kind of agility striking fear into the hearts of boardrooms around the world, with Amazon's massive acquisition of Whole Foods signaling it's both willing and seemingly able to enter almost any industry it likes. Other notable deals include its 2009 acquisition of Zappos (for $1.2 billion) and its purchase of 3D imaging company Body Labs earlier this month (for around $60 million).. 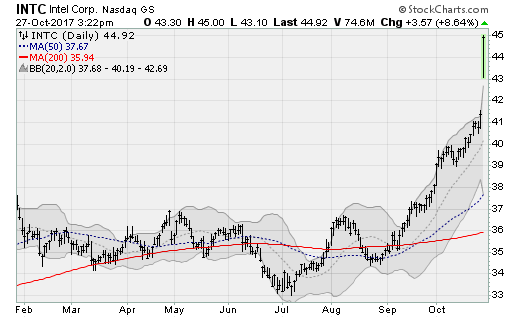 Intel shares gained more than 7% on Friday, extending a 35% rally off of its early July lows. This after the chipmaker reported earnings of $0.94 per share (vs. the $0.80 expected) on revenues of $16.2 billion (vs. $15.7 billion expected). Forward revenue guidance came in hotter than expected as well.

With legacy client computing posting flattish results, new areas like IoT took the spotlight with top-line growth of 23%. The data center was also strong, up 15% to now comprise 45% of the company's overall sales.

Intel's acquisition activity has supported this strategy pivot, with its most compelling recent transaction certainly being its $15.3 billion pickup of Mobileye, an Israeli developer of computer vision, localization and mapping tech used in autonomous driving. The deal furthers Intel's push into the self-driving sphere. Not long after the acquisition closed, Fiat Chrysler signed onto the Intel, BMW and Mobileye partnership, which promises to launch the production of fully automated cars by 2021. 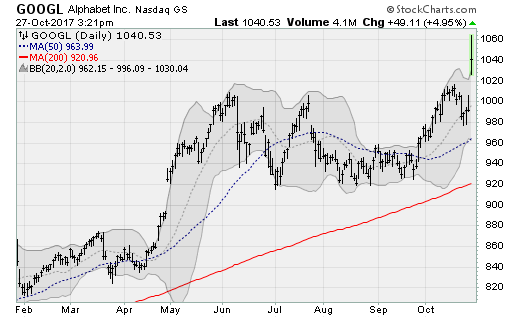 Shares of Google parent Alphabet were up nearly 6% mid-day on Friday, pushing above the $1,000-a-share level for the first time after the company reported earnings of $9.57 per share vs. $8.43 expected with paid clicks up 47%. While cost-per-click declined­—amid a shift to mobile and competitive pressure—overall ad revenue grew on volume.

Easily the most acquisitive of the bunch, per the PitchBook Platform, Alphabet has recently doubled down on Google-branded hardware with the Pixel 2 launch (which was a bit unexpected given its prior failure with Motorola). The company's prolific dealmaking has been dominated by activity in the mobile space over the last decade. And the company has completed 11 deals this year, closing earlier this month the pickup of 60db, a mobile platform for podcasts and other short-form audio stories. 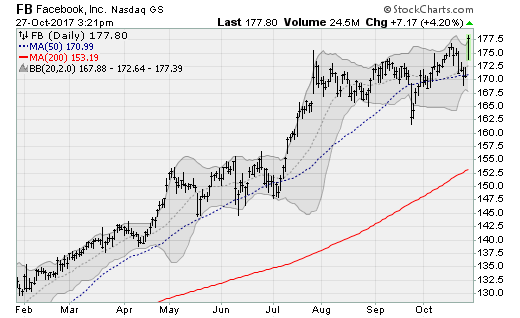 Facebook shares closed up 4.2% on Friday, pushing to record highs and breaking out of a trading range going back to July. The company will next report results on Wednesday, but it's still getting a lift in tandem with the other big tech stocks on enthusiasm for the online advertising reported by Alphabet.

Analysts at Monness Crespi & Hardt upgraded the stock to "Buy" this morning on the belief that Facebook and Alphabet are an unequivocal duopoly in the industry while further growth will hinge on success in emerging market countries and a transition to video content.

Facebook is clearly an active buyer, bringing Instagram into the fold for $1 billion five years ago and WhatsApp for a staggering $22 billion just two years later. But this year has shaped up to be on the quieter side, with just four deals compared to eight last year. Earlier this month, Facebook closed its $100 million acquisition of tbh, the designer of a mobile polling app for sharing anonymous, positive feedback among friends. 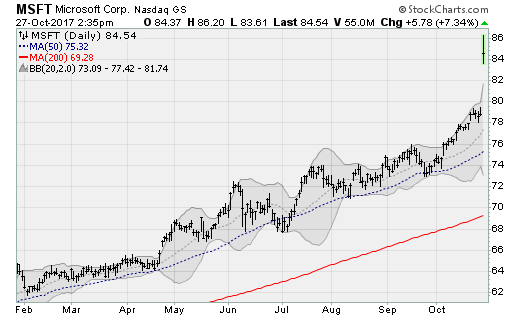 Microsoft shares went vertical Friday, finishing up more than 6% after hitting all-new highs mid-day on enthusiasm over the company's efforts in the cloud services space. Quarterly earnings came in at $0.84 per share (vs. the $0.72 expected) thanks to better-than-expected revenues of $24.5 billion, up 11.7% from last year of which $6.9 billion came from cloud revenues. Management guidance was strong as well.

Analysts at Oppenheimer viewed the results as a clear, affirmative verdict that the company can execute on its unique mobile hybrid cloud strategy to be extended by efforts in LinkedIn, Azure Stack, and AI.

The company has wrapped up seven deals thus far this year, including VR-based social media platform AltSpaceVR earlier this month. In May, it closed the $100 million acquisition of formerly VC-backed cybersecurity company Hexadite in a bid to protect Windows 10 customers against network hacking attacks. But far and away Microsoft's most notable acquisition of recent years, at $29 billion, is the takeover of LinkedIn—a deal that demonstrated the collective value of individual social media users. 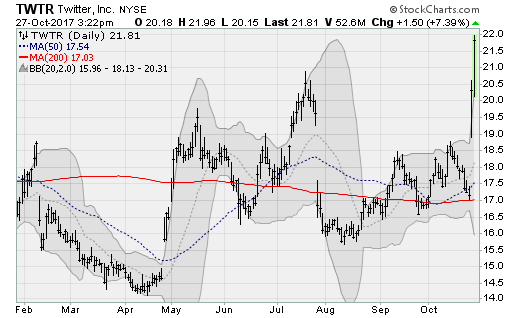 Twitter, the social media company that's been a post-IPO disappointment (down more than 70% from its late 2013 high of $74.73) also participated in Friday's surge. Shares of Twitter gained nearly 7% on Friday, up nearly 30% from its low earlier in the week, to cross over its July highs and return to levels not seen in more than a year.

This turn comes after reporting a big operating earnings beat on better cost controls. Analysts were happy with better user growth trends and a smaller-than-feared ad revenue decline, with UBS upgrading shares to neutral and raising their price target to $21 on a multi-quarter pattern of better user engagement.

That comes as welcome news with the company the subject of much speculation about being an acquisition target for possible buyers including Disney and Salesforce through much of last year, even as the social media platform snapped up four of the 58 companies it has acquired since 2007, per the PitchBook Platform.

Not a subscriber to our daily M&A newsletter? Sign up today.