Did you know that there have been 39 times since 1990 when the VIX has closed below 10, and that 30 of those times have happened this year? And 15 of those have been in the last 30 days!

Ed Easterling of Crestmont Research sent me recently an updated chart of the VIX Index. Notice that the all-time low of 9.19 was put in on October 5, 2017.

You can’t really draw any conclusions about the next move of the markets (I’ve written a lot about the unpredictability of the market in my free weekly newsletter, Thoughts from the Fronline, lately), because the VIX could spike to 50 or stay in this low range for a very long time.

Essentially, we have trained investors to “buy the dips,” and that mentality removes a lot of volatility. Here is a chart of the VIX since the beginning of the year (from Yahoo Finance): 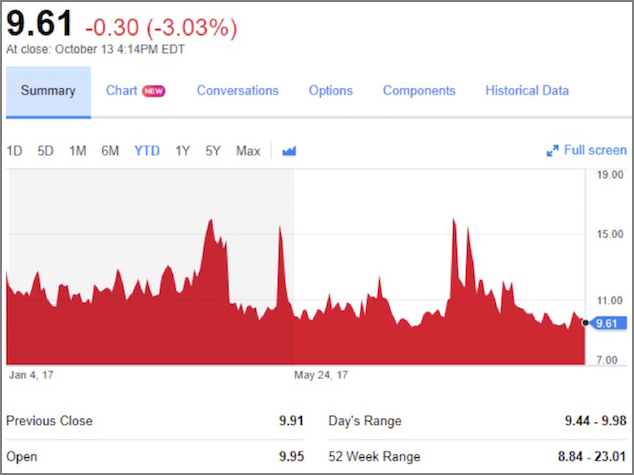 I got a blitz email tutorial this week from my friend Doug Kass (of Seabreeze Capital), a writer for the Street.com and Real Money Pro. He generally puts out two to three short pieces a day with his observations on the markets, and he discusses what stocks he is trading.

I was particularly struck with his observation about the massive—and it truly is massive—short position in the VIX and VIX futures. Look at this chart: 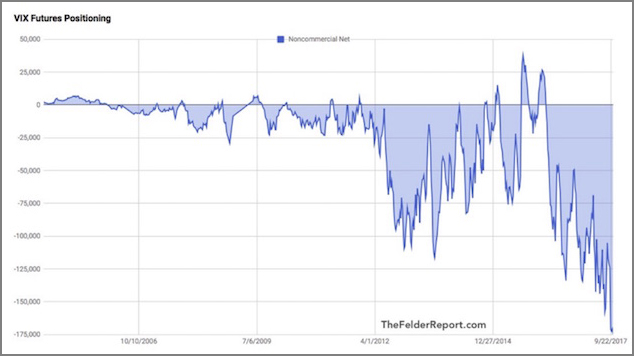 Now, as my friend and fellow Mauldin Economics writer Jared Dillian notes, prior to 2006, it was not possible for retail investors to trade the VIX, so an ETF was created and options and futures became available.

Prior to that time it was just professionals who could create the effect of the VIX with futures and options trade positioning on the S&P. You almost had to be a pit trader to be able to do it.

Understand, the VIX is a totally artificial construct. It’s a way to measure the future expectations of investors regarding the volatility of market prices. And lately, investors have been rewarded for shorting the VIX.

It is almost like the experiments you see where rats learn that if they punch a button, they get a grape. Investors have learned that if they short the VIX, they make a profit.

Except that now there are so many people on that side of the boat that when the boat starts to turn over, the rush to get the other side is going to rock that boat hard… possibly to the point of swamping it.

Doug warns that a 2% or 3% move down in the markets could cause short covering in the VIX that could quickly spiral out of control. Not unlike the “portfolio protection” trade that brought about the 1987 crash.