If you’re reading this post, you’re probably well aware of the investing prowess of Raymond Dalio. The billionaire investor, hedge fund manager, and philanthropist founded the largest hedge fund on Wall Street. You may have also heard that on September 19, 2017, Dalio plans to release Principles, an expanded and revised edition of the manifesto he published in 2011.

To celebrate the release, I wanted to discuss the original 2011 manifesto and also review Dalio's stocks reported in this recent Form 13F SEC filing to understand what he's investing in today.

"Principles are ways of successfully dealing with reality to get what you want out of life."

With original Principles, the 123-page manifesto gave readers a glimpse into the billionaire's philosophies about living life and managing people and organizations.

According to the book's new website, the original Principles has been downloaded over three million times. You can download the old PDF of Principles here. In the text’s abstract he explains:

“Above all else, I want you to think for yourself—to decide 1) what you want, 2) what is true and 3) what to do about it. I want you to do that in a clear-headed thoughtful way, so that you get what you want. I wrote this book to help you do that.“

Principles is a required read for all Bridgewater employees which hints at how core he believes these guidelines are to their investment strategy and resulting performance. Soon, Principles will be available in print. It’s available on Amazon for pre-order and purchase.

"Truth, more precisely an accurate understanding of reality is the essential foundation for producing good results."

Ray Dalio also gave a recent TED talk that discussed how he converted his principles into a computer algorithm that now helps him make decisions:

Last month, on August 10th, 2017 to be exact, Dalio's firm Bridgewater Associates filed their quarterly Form 13F regulatory filing. I reviewed the 13F filing to get a sneak peek at holdings in Bridgewater's massive portfolio.

Bridgewater's QoQ Turnover for the latest quarter was over 25%, so the firm appears to trade a significant percent of its portfolio each quarter. 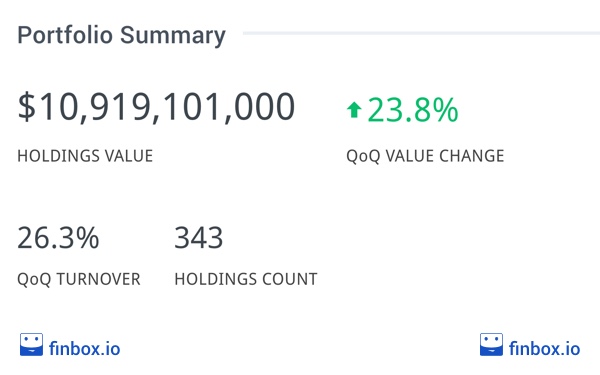 The Ideas section of finbox.io tracks top investors and trending investment themes. You can get the latest data on the holdings discussed below here. The following table summarizes Bridgewater's Largest Holdings reported in the last filing:

The firm's largest positions were mostly ETFs with the Vanguard Emerging Markets index fund (VWO) ranking at the top of the list and accounting for 29.5% of the portfolio. Since I was mostly interested in the businesses Mr. Dalio and the team find most promising in the current market environment, I also created a ranking of holdings excluding ETFs:

It's interesting to see so many Energy stocks in the Top 7!

Here are the Top 7 stocks based on my calculations:

Tahoe Resources is a mining company and intermediate precious metals producer founded by Kevin McArthur, former CEO of Glamis Gold and Goldcorp. The company has silver and gold mines in Canada, Guatemala and Peru. The company's Piotroski Score is 8. Scores between 7-9 are considered great, 4-6 are considered moderate, and scores below 4 are considered poor. Over the last twelve months, the company has grown revenue to 885 million, up 33.8% year over year. Tahoe Resources is currently trading at a 0.6x price to book multiple which is below its five-year average of 1.9x.

United is an airline holding company headquartered in Chicago. At $59.80 per share and 300 million shares outstanding, the company's implied market capitalization is $17.9 billion. United is currently trading at a 2.1x price to book multiple, well below its five-year average of 7.2x. Growth is expected to pick up. United's forecasted to report around $38 billion (+4.1%) in revenue for fiscal year ending Dec 31, '17 and $39.6 billion (+4.1%) for the fiscal year ending Dec 31, '18.

Southwestern Energy is an American natural gas and petroleum exploration and production company headquartered in Houston, Texas. Over the last twelve months, the company has grown revenue to $2,992 million, up 17.9% year over year. The company's price to book multiple of 1.7x is below the average of its peers of 1.9x.

The listed data above is as of September 15, 2017. For the latest updates, please see Ray Dalio Idea page.

Everyone can agree that with thousands of stocks traded on the American exchanges, doing thorough research on each one is likely impossible for smaller investors. Leveraging the resources of the largest hedge funds on Wall Street can be a powerful way to narrow down the list.

In the full FREE Ray Dalio portfolio review, we break down his holdings further by: