One of the hardest part about investing is not knowing where to start.

I started Old School Value 9 years ago in 2008 just before the crash and as a complete and utter newbie, I had no idea where to begin, what to read and who to believe.

I’m sure you’ve experienced it yourself.

Think back to your first year of investing (if you can haha).

The onslaught of information, tips and the promise of how to make money quickly.

My journey went from trying to learn about options, patterns, buy the hot stocks strategy until I clicked with fundamental value investing.

Compared to many of you, my nine years is a drop in the bucket. But throughout all this time, there are certain authors and books that never fall off my recommendation of best investment books list.

In fact, there is only one author who achieves two spots on my list.

His two books are:

With Old School Value, I’ve tried to come up with creative ways of quantitatively coming up with a moat calculation.

In the current rendition of the OSV Analyzer Spreadsheet, users can adjust numbers to come up with a chart like this. 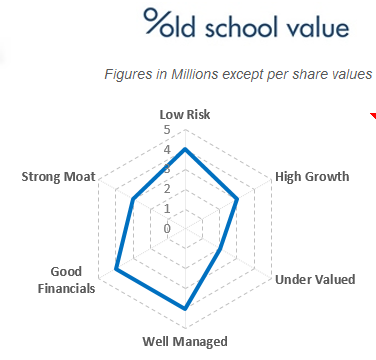 But at the end of the day, this type of chart is only something a person can update reliably.

There are too many intangibles and non-quantifiable aspects to a moat.

One thing I’ve learned the hard way is that most companies do not have a moat.

Also a competitive advantage is not a moat.

Therefore having a competitive advantage is not a moat.

Which brings me back to Pat Dorsey.

This Google talk based on the The Little Book that Builds Wealth looks at competitive advantages and moats.

The Good and the Bad

Isn’t the Moat Already Priced in?