Storm clouds on the horizon?  MarketCycle has been recently saying that the level of market risk has increased and that it may remain high for several more months.  So, we are still in a cyclical bull market, but risk is currently higher than normal.  We have now taken on, what is for us, a large extended-duration U.S Treasury-bond position.  This is something that we seldom do, especially when interest rates are rising.  So, why Treasury-bonds?  Simply stated:  stocks down = Treasury-bonds up.  When risk has abated, we will sell this protective asset and rotate this money back into late-stage (of the market cycle) stock positions.  Increased risk is not a guarantee of a market correction, but the current odds are higher than we like.  We must be the ones that decide how much we invest in stocks at any one time and this must be based on quantifiable risk levels; normally the odds must be positively skewed in our favor.  On the other side of the equation, the calculated economic-recession chances 2 months out are at less than 3% which is ridiculously low.

Concerns?  Part of our current concern is based on seeing the early breakdown of various market internals and from watching sophisticated institutions rotate into safe haven assets ahead of perceived market weakness.  It has been over one year without investors seeing a normal and routine 5% correction and this is not only strange, it is suspicious; the stock market normally gets two 10% pullbacks each year.  Plus ‘seasonals’ are temporarily weak between now (August) and October.  Frankly, I wouldn’t be surprised to see a 10% temporary correction before too long.

Protection?  Why do extended-duration (30 year) U.S. Treasury-bonds make good protective assets?  On the next two charts, the S&P-500 is shown in RED and extended-duration Treasuries are always shown in BLUE.  The percentage gains (profits) are shown on the right hand side of the chart.  The time period is included on the upper left.  The first chart, of 2011, shows what normally happens when stocks drop, in this case around 20%.  The second chart, of 2014, shows that extended-duration Treasuries can move up right along with stocks during strong periods for stocks, but only if the Treasuries are selected at the correct times.  So, during bad times, extended-duration Treasuries can move up as much as 3x more than stocks drop which means that a 20% allocation can often protect a 60% stock position.  As stated above, MarketCycle has held these T-bonds in client accounts for over a month now and might for another few months.

2011, bad times for stocks and good times for Treasuries (with stocks down almost 20% and Treasuries up 60% during this 3 month period):

Stocks over the long-term?  As I always say, news and politics do not move the stock market longer-term, they only cause short term volatility.  So, one must instead concentrate on things like EARNINGS, CENTRAL BANKS and the ECONOMY.

EARNINGS:  One of the primary movers of stocks is corporate operating-earnings.  Strong earnings = strong corporations = strong stocks = strong stock market.  We have now had three quarters of 20% earnings growth in the S&P-500. (chart courtesy of Daily Sentiment Report, August 12 issue).  To be fair, the next quarter’s reported earnings will likely trend lower.

CENTRAL BANK ACCOMMODATION:  Another thing propping up the stock market, other than earnings as shown above, is the continued accommodating activity of Central Banks.  So much money is sloshing around the globe that it has to continue to push its way into the already rising stock markets.  This next chart shows the U.S. Federal Reserve, Bank of Japan and the European Central Bank just since 2011; money is piling up toward the sky (chart courtesy of View from the Top, August 11 issue).  To be fair, the U.S. Federal Reserve has already begun stepping on the brakes but with inflation being slow to increase, the Fed will have to move very slowly and this is normally good for stocks.

ECONOMY:  The Leading Economic Indicator (LEI as reported by NBER) incorporates a lot of important data that may affect markets in the future (such as job, manufacturing, retailing and housing trends) and when bad, lead to a recession (shown as grey areas below).  This next chart shows a continued strong upward trend to the LEI (chart courtesy of Doug Short, August 18).  Again, to be fair, while the trend is absolutely up, some of the individual parts of the LEI that start to break down long before an economic recession begins have recently shown some weakness. 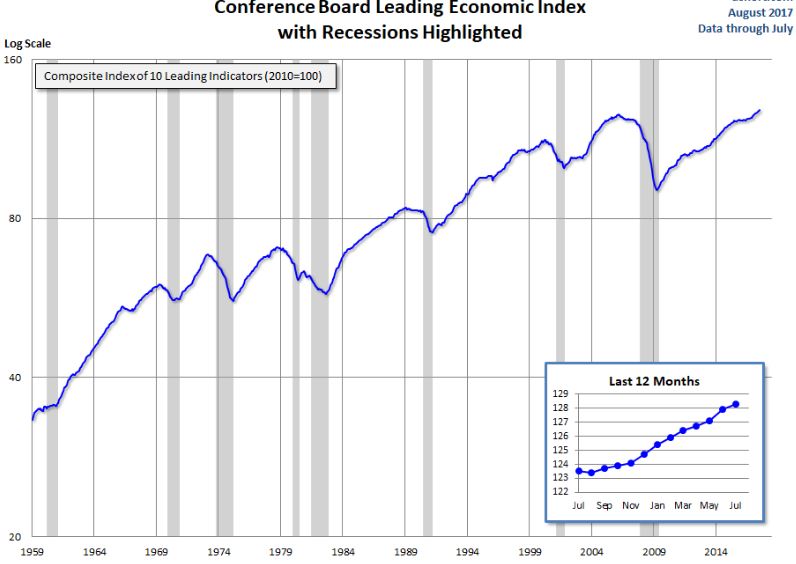 As I stated above, I believe that we have a greater than normal chance of a 5-10% correction soon, but a much bigger economic-recession may present itself to us perhaps 1.5 years from now.  Why?  If the Federal Reserve continues its free wheelin’ accommodation, then why would we even have to go through a recession?  The answer is simple; stocks are currently overvalued.  The CAPE is the ‘Cyclically-Adjusted Price-to-Earnings’ and it shows how high the stock market is priced as compared to its actual earnings.  The S&P-500 is currently at 30, which is historically high, and implied earnings growth is low, at 1.45%, but earnings growth should be at around 7% to support a CAPE of 30.

The ‘Price-to-Earnings’ for the MSCI AC World Index is also at 30.  Each time it has reached this point during the past sixteen years, the market has found a reason to fall into correction.  Could this next pullback be similar to the one in 2011, with its 19% temporary drop, or 2015 with its 13% temporary drop?  In both cases, the market fall terrified investors, then rebounded strongly and moved on to new highs.  (chart courtesy of Jeffrey Kleintop of Charles Schwab on August 21, 2017) 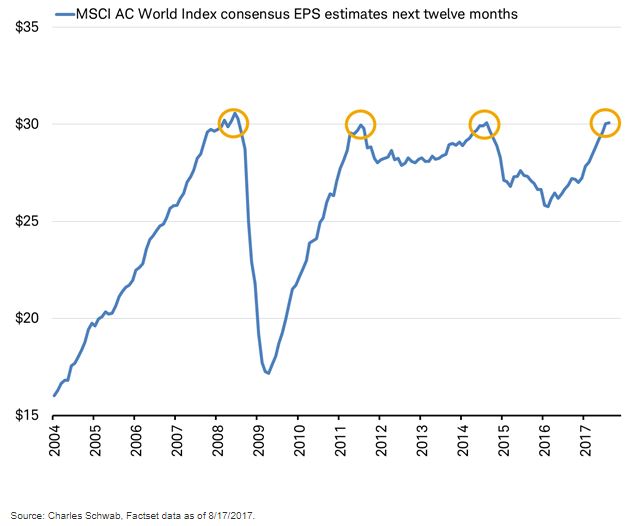 Stocks in the near-term?  We’re due a pullback since it has now been more than one year without even a 5% pullback and we normally get two 10% pullbacks each year.  Gains have to be packed down so that the stock market can form a base from which to run higher again.  (chart shown as of early August): 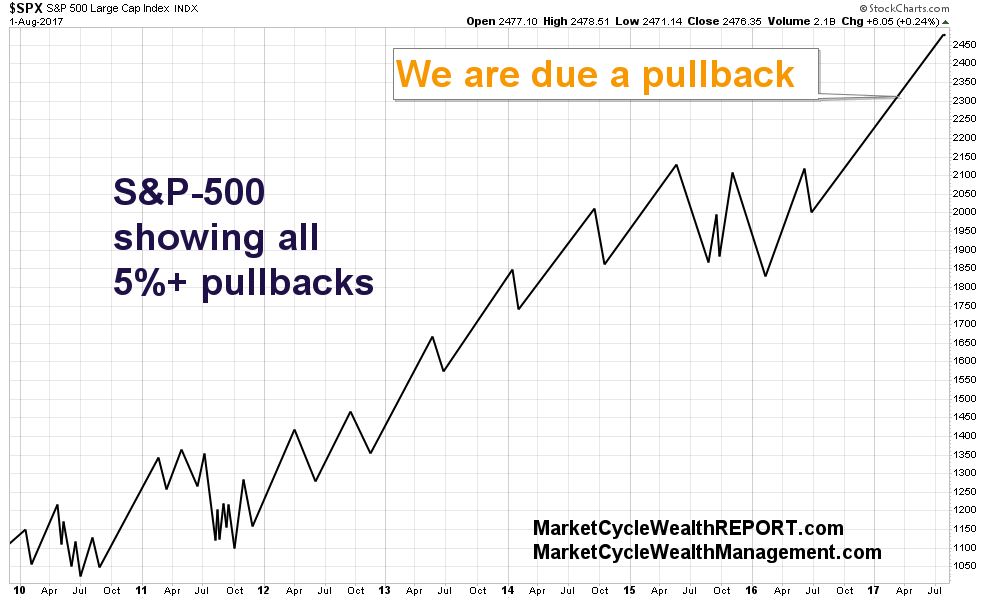 Market Internals weakening:  The underpinnings of the market are weakening.  For example, 96% of the time that the spread between the S&P-500 and the number of S&P-500 stocks above their 200-day Simple-Moving-Average (SMA) becomes this large, the market takes a fall of over 5% within the ensuing 5 weeks.  The black line (showing the S&P-500) and the blue line (showing the number of stocks above their 200 SMA) should almost match; instead the blue line has been steadily falling for seven months and has had a substantial drop within the past month.  Only a handful of stocks (mostly tech) have been leading the stock market higher but most stocks are falling.  (chart as of August 24):

MarketCycle’s Double Hindenburg Omen, our much improved proprietary version of an old indicator, recently triggered in mid-June and again in mid-August, 2017.  It indicates a stock market that is becoming too euphoric and overvalued.  In the stock market, euphoria “cometh before a fall.” 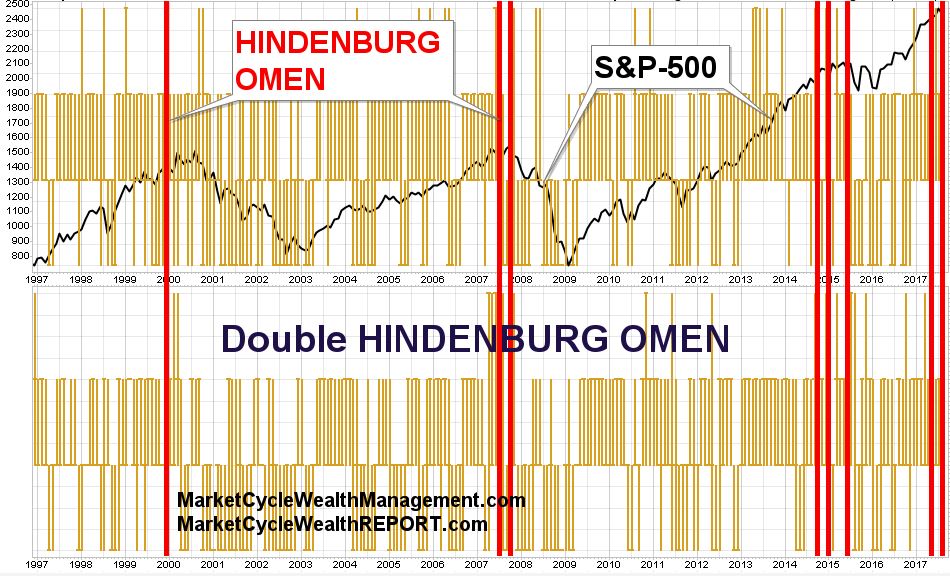 SUMMARY:  As I’ve been repeatedly saying since the first week of April in 2009: “We’re in a stock bull market.”  The only thing that has changed is that near-term risk has increased and some protective assets should likely be (temporarily) held.  Extended-duration Treasury-bonds make for good protective assets in a time of increased risk as long as one recognizes legitimate risk early and then buys them before the market drops (which means that you can initially look like you are wrong).  It pays to be aggressive when risk is lower than normal but one must protect accounts if risk is higher than normal.

Importantly, we must remember that if we own a stock, it simply means that we are co-owners in a corporation.  If the corporation does well, we share in the profits.  Stocks move, longer-term, because of earnings and the economy and the Central Bank… not news and politics.  On Saturday, August 12th, there was a clash between White Nationalists and protestors in my hometown of Charlottesville, Virginia.  Horribly, three people were killed and many injured; the news and video footage quickly spread across the globe.  On Monday, August 14th, two days later, the Dow opened up 150 points.  Politics and news and wars and Tweets are not what controls the stock market, especially longer-term.  We have to begin to see these things as separate from one another.  So, stop worrying?

But you can’t stop worrying; it is literally built into your brain as a protective mechanism.  You actually have a portion of your brain, the amygdala, that forces you to worry and then to make panic decisions at exactly the wrong time.  It’s genetic.  In addition, many of one’s cognitive bias tendencies are either genetic or deep rooted, so they also add to poor decision making.  It’s a dilemma that is hard to fix… and it’s costly.  So, you are almost always better off having an experienced professional handle your investment account since, when chronic corrections and bear markets and economic recessions are taken into consideration, it can be much more profitable (even management fees are a tax write-off) and you will be better able to sleep at night.

CLIENTS:  It typically takes less than 5 minutes for clients to set up the initial wiring instructions for their MarketCycle investing account, and once in, the process to actually wire in the money takes seconds (and I can email an instruction sheet to clients).  A fairly large number of clients have been sending additional money into their MarketCycle investment accounts via wire and/or check.  Please know that I am aware of this, but will not be investing the new cash immediately.  It is always better to do the buying as close to the bottom of a larger pullback as is possible.  Since the chance of a pullback in the near-term is currently higher than normal, it is best for us to patiently wait.  But IMO, investors are going to be shocked at how high the U.S. stock market will be by 2029… I even purchased the domain name of:  Dow80000