ValueWalk
Home Politics The Market No Longer Cares About Trump

I typically stay away from politics. Besides, you probably get enough of it on Facebook!

But I don’t stare at politics every day. I stare at markets every day, and I am pretty comfortable saying that my knowledge of markets is smarter and more incisive than most people’s.

And you know what I have noticed about markets lately?

They don’t care about Trump.

The Market Has Learned That Trump Is All Talk

When Merck CEO Ken Frazier stepped down from the President’s Manufacturing Council on account of Trump’s remarks on Charlottesville, did you see Trump’s reaction?

That sounds like a direct threat of litigation to me. You know what Merck stock did in response?

That isn’t supposed to happen. Do you remember this tweet from Hillary Clinton during the presidential campaign?

That one tweet sent the entire biotech sector into a bear market that lasted eighteen months. 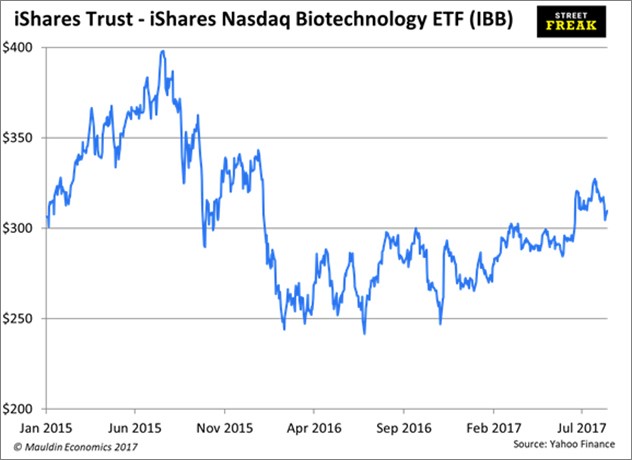 Is Hillary more powerful than Trump? That isn’t the right way to look at it. Hillary was just a candidate at the time. Trump is actually president. But the market ignored Trump and listened to Hillary.

The market believes that Hillary’s threat was more credible than Trump’s.

Trump Has Lost All His Credibility

The stock market just does not give a crap about what President Trump says. He tweets about the market, about individual companies, on a pretty regular basis… and the market stopped caring a while back.

The market is smart. The market knows that Trump can’t or won’t follow through on any of his statements.

Is Trump really going to go after the pharmaceutical industry? He might want to, but no other Republican is interested in doing that.

But if you told me a year ago that a sitting president would issue a direct threat to an individual company and the stock would be up on the day… madness.

Part of this is a function of the fact that this is the biggest bull market ever—every dip is bought and every vol uptick is smashed. Stocks react to things differently in a bull market than a bear market.

Tax Reform Is His Last Chance

Right now, I give tax reform a 30 delta. That’s options language for saying it has a 30% chance of happening.

Tax reform is very important. I think the prospects for it passing account for virtually all of the market’s 20% gain since election night. It’s basic equity valuation—stocks are valued on after-tax cash flows. Lower tax rates equal higher stocks.

Not only does corporate reform look less likely, but there has been open discussion of higher individual tax rates. Not encouraging.

The world looks a lot less hopeful than it did in those first few days after the election, when Trump was busy assembling an economic dream team.

Sorry to be a bit of a downer, but nobody else is doing their job.

If you watched Trump’s inexplicable press conference at Trump Tower on Tuesday afternoon, you probably saw Steven Mnuchin and Gary Cohn over his right shoulder, looking a bit uncomfortable.

Remember the halcyon days post-election, when everyone said Trump was fine because he was going to surround himself with good people?

(In my experience, it never works that way.)

What happens if those good people leave?

Since the press conference, Cohn has already expressed dismay about Trump’s remarks. I suspect he is trying to hold on for 1) tax reform and 2) a Fed chair nomination. We’ll see how much longer he can last.

Between Kelly, McMaster, Mattis, Cohn, and Mnuchin, Trump really does have some safe hands in the administration. If they leave—and they probably will, at some point—smell you later, stock market.

Here is my prediction: In a few years’ time, maybe sooner, people will have figured out that Trump is a lot of talk and not much else. About everything.

That is not good.

It has implications for foreign policy. Like, what if there is no actual fire and fury? Just a lot of hot air?

It’s that people ignore him.

The prediction that Trump would cause volatility so far has been wrong. It might be one of those predictions that ends up being right in the long run.

Meet Jared Dillian, former Wall Street trader, fearless contrarian, and maybe the most original investment analyst and writer today. His weekly newsletter, The 10th Man, will not just make you a better investor—it’s also truly addictive. Get it free in your inbox every Thursday.