On the surface Cheniere Energy (LNG) can be a difficult to understand. But if you break it down in small parts it’s not so bad. I’m trying to understand the gap in price between LNG and CQH.

LNG owns 80% of CQH and CQH owns 48.9% of CQP. Is LNG more risky than CQH? LNG owns Corpus Christi but like CQH/CQP it has long-term contract to guarantee a certain cash flow. LNG owns 80% of CQH which owns 48% of CQP. CQP owns Sabine Pass/LNG terminal, 5 LNG storage tank, 2 dock, and long-term agreements with Chevron and Total that pays CQP $250 million a year.  I believe there’s 10 years left to the agreement and from my understanding they are not even using the infrastructure. They are paying a lot of money for nothing. This suggest that the contracts are rock solid. CQH is basically a holding company with CQP has its only underlying asset. CQH was formed to hold the Cheniere Partners limited partner interests that are owned by Cheniere, thereby allowing Cheniere to segregate its lower risk, stable, cash flow generating assets from its higher risk, early stage development projects and marketing activities.

Why does this gap exist? 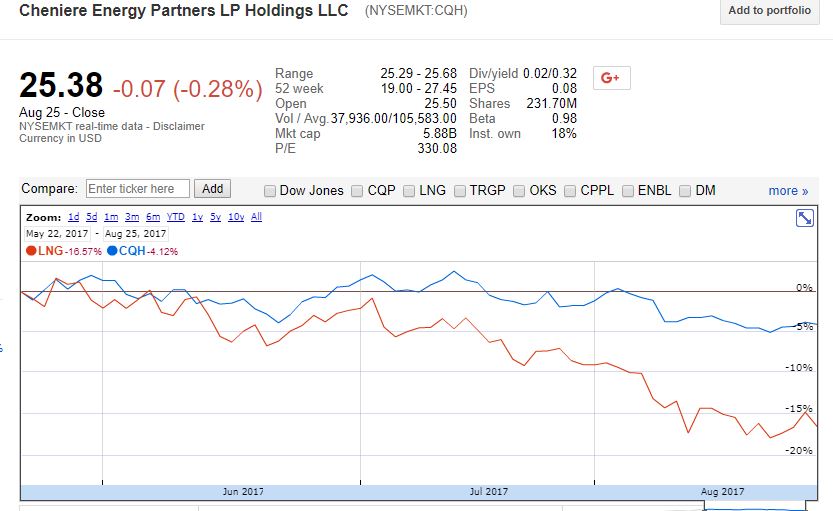 Potential hypothesis and questions for the price gap between the two:

I’m not a LNG pro. I’m just starting to explore this company. It’s definitely interested to learn more.  Here’s my back of the napkin attempt to figure this thing out. Please not that I left some stuff out (like the GP) but you will get the idea.