ValueWalk
Home Business Boomers Are Turning 71-These 4 Charts Paint A Perfect Storm It Will...

Few investors understand the magnitude of the looming demographic crisis and its ramifications.

The first Baby Boomers turned 70 last year. At the same time, the US fertility rate is at its lowest point since records began in 1909.

Get The Full Capital Allocation Series in PDF

Get the entire 4-part series on capital allocation in PDF. Save it to your desktop, read it on your tablet, or email to your colleagues

This disastrous combination means by 2030, those aged 65 and older will make up over 20% of the population.

In the meantime, the percentage of working-age cohorts are in decline. Combined together, these trends create a perfect demographic storm for the US economy.

The chart below shows that growth in the working-age population has been a leading indicator of nominal GDP for decades. 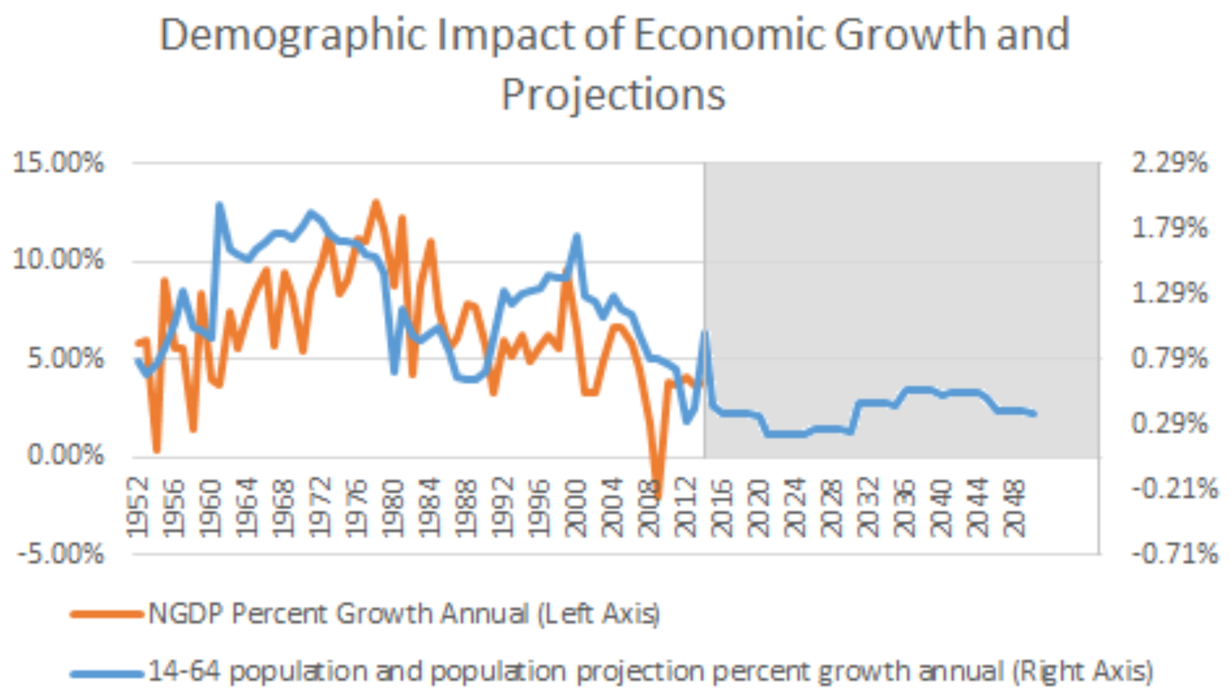 One of the reasons for that is that spending drops on average by 37.5% in retirement. Given that consumption accounts for 70% of US economic activity, this is a major deflationary force.

Economic growth and corporate profits go hand in hand. Which means this trend will cut down company earnings and, in turn, investors’ returns will go down further.

That’s not yet the worst news. Along with declining profits, America’s aging population has ever more profound implications for investors.

A Big Shift in Financial Markets

This huge funding gap in pensions means Boomers will be forced to look for income elsewhere. Historically, that has come from bonds.

The research shows once you hit the age of 65, you go through the most profound asset class shift since you were in your 30s. You start to trim your equity and start to raise your bond exposure.

This shift has been visible for decades. However, it’s about to become much more pronounced.

As mentioned above, the first Boomers turned 70 in 2016. That means this year they turn 71.

Due to IRS mandatory minimum drawdown laws for retirement plans like IRAs and 401(k)s, when you turn 70 ½, you are forced to withdraw at least 5% of the value of the plan each year.

This spells trouble for the stock market as Boomers have 70% of their portfolios in equities.

In 2016, the Tax Policy Center found that 37% of the US stock market was owned by retirement accounts like IRAs and 401(k)s.

Therefore, this wave of forced selling will flood the market with billions of dollars’ worth of equities and bonds, which will push down prices.

With millions of retirees forced to divest their portfolios over the next decade, and markets sitting at all-time highs, investors should start thinking about exit strategies.