In this Academic-Style Research we tested a risk factor, gearing measured as net debt-to-equity, on a global universe of stocks. Net debt-to-equity shows measures the leverage of a firm. Net debt is given by deducting the company’s cash and cash equivalents from its debt. A higher net debt-to-equity means higher balance sheet risk.

Can You Beat The Market By Investing In Low PE Stocks?

We also tested to combine factors from Fundamentals, Valuation, Momentum, and Risk into FVMR.

At this year's SALT New York conference, Cathie Wood, founder, and CEO of ARK Investment Management LLC, spoke about her view on Bitcoin, the outlook for Tesla and Ark's investment process. Q2 2021 hedge fund letters, conferences and more The investment manager explained that the team at ARK has a five-year investment horizon, with a Read More

A global universe of stocks from June 2006 to April 2017. Only included companies with a minimum market cap of US$500m (no micro caps) and more than US$3m in 3MADTO (no illiquid stocks). On average, the universe consisted of 3,200 stocks per quarter.

Methodology: Testing the relationship between gearing and return

We winsorized at +/- 3 standard deviations to exclude outliers. Divided the universe into deciles and added two additional groups: Top 15 and Bottom 15. We calculated the equal-weighted return for each group. The groups were reselected and rebalanced each quarter. All returns are presented in US dollar terms.

Top 15 beat Decile 1, however, the Bottom 15 returned the most

Only looking at the deciles, it lays out rather well and Decile 1 had the best return. The Top 15 beat Decile 1, however, the Bottom 15 returned the most. 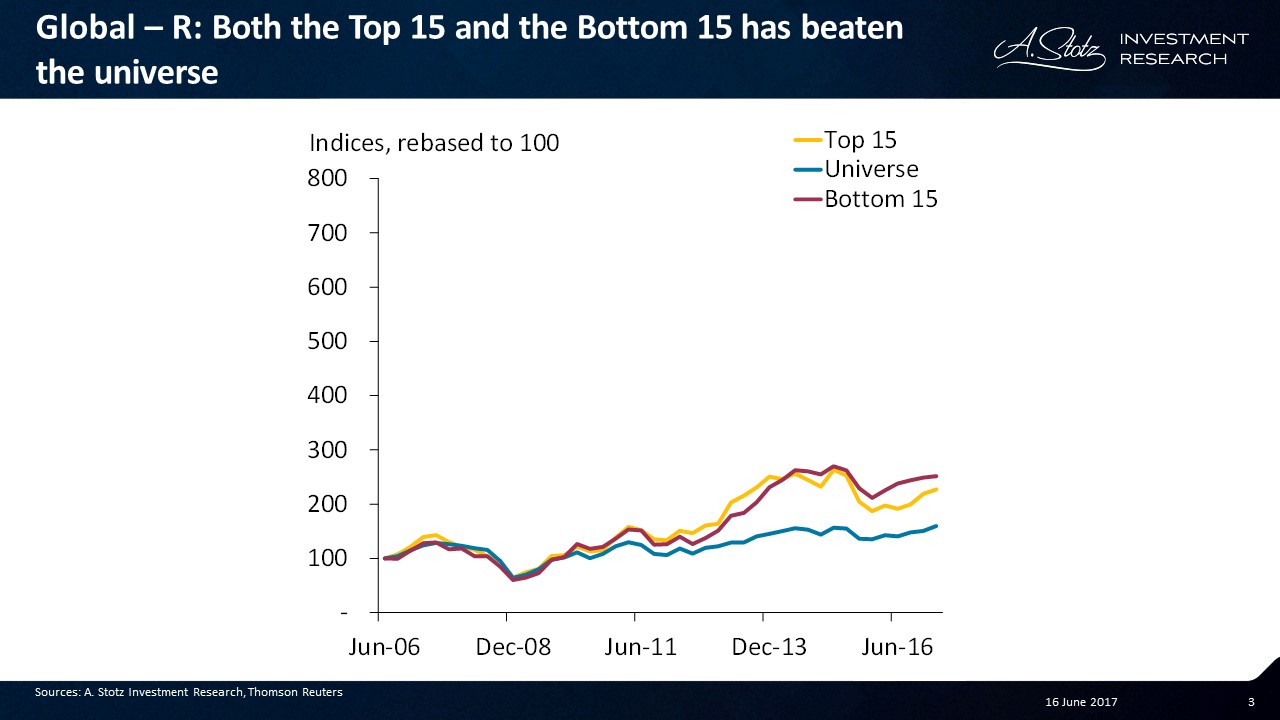 Both the Top 15 and the Bottom 15 has beaten the universe consistently since the global financial crisis in 2008. 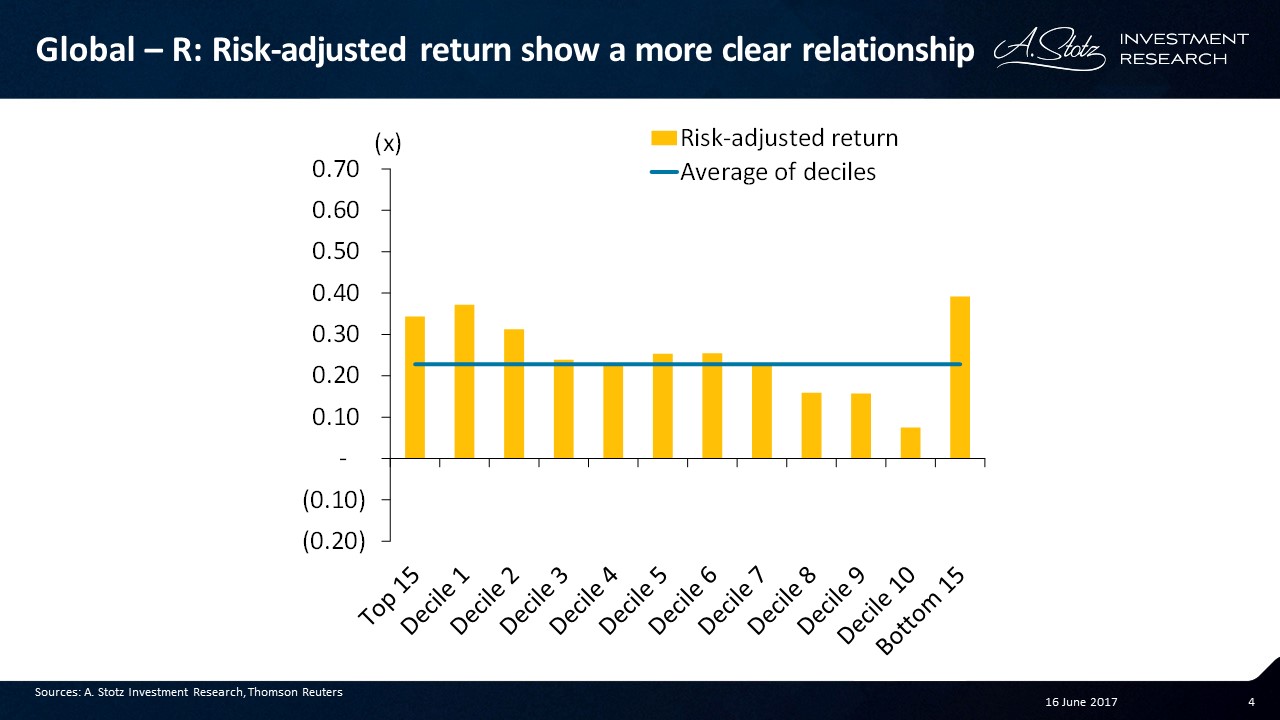 Risk-adjusted return shows a bit more clear relationship between gearing and return. However, the Bottom 15 still remained the best performer. Investing in low gearing companies seem to have worked quite well. But there also seems to be some opportunity among the absolute worst.

Question: Why do you think the 15 stocks with the absolute highest gearing had the best performance? Let us know your thoughts in a comment below.

Decile 1 had a good success rate 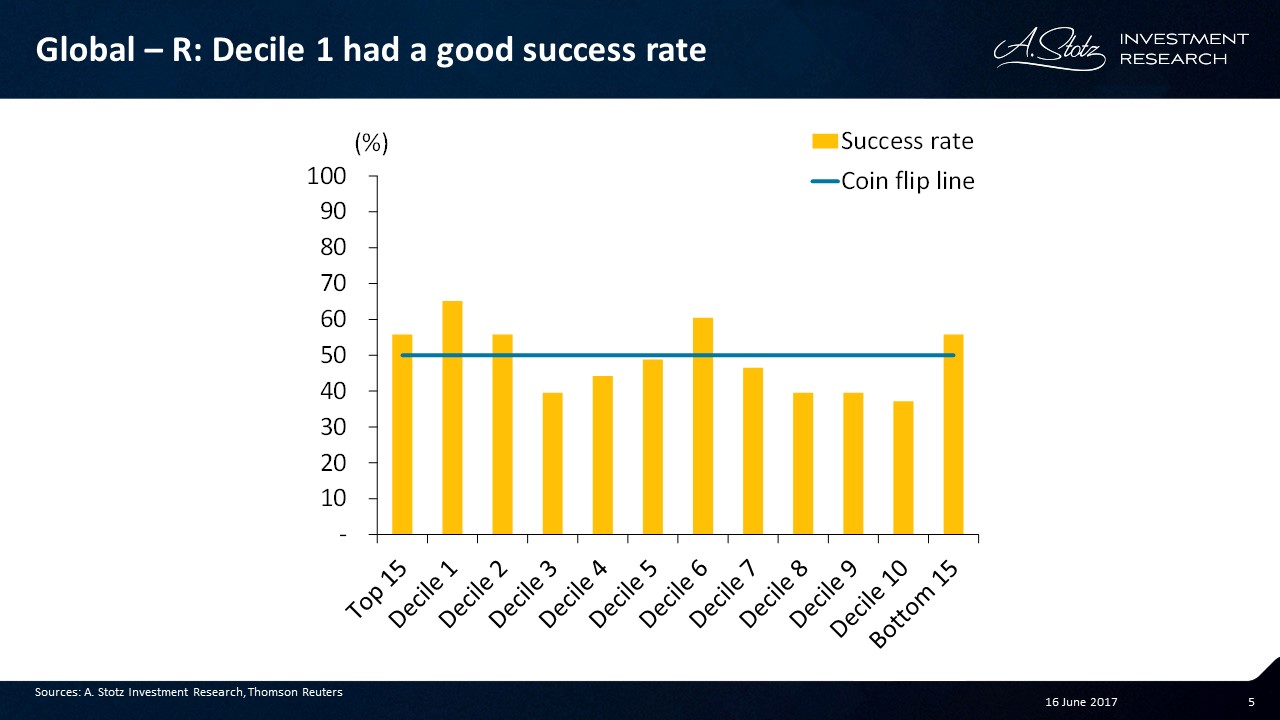 Let’s combine this Risk factor with a Fundamental, a Valuation, and a Momentum factor

Check out Can Change in Asset Turnover Predict Future Return?, Can You Beat the Market by Investing in Low PE Stocks?, and Can a Price Momentum Strategy Generate Abnormal Returns? to learn more about the individual factors and previously tested factor combinations. 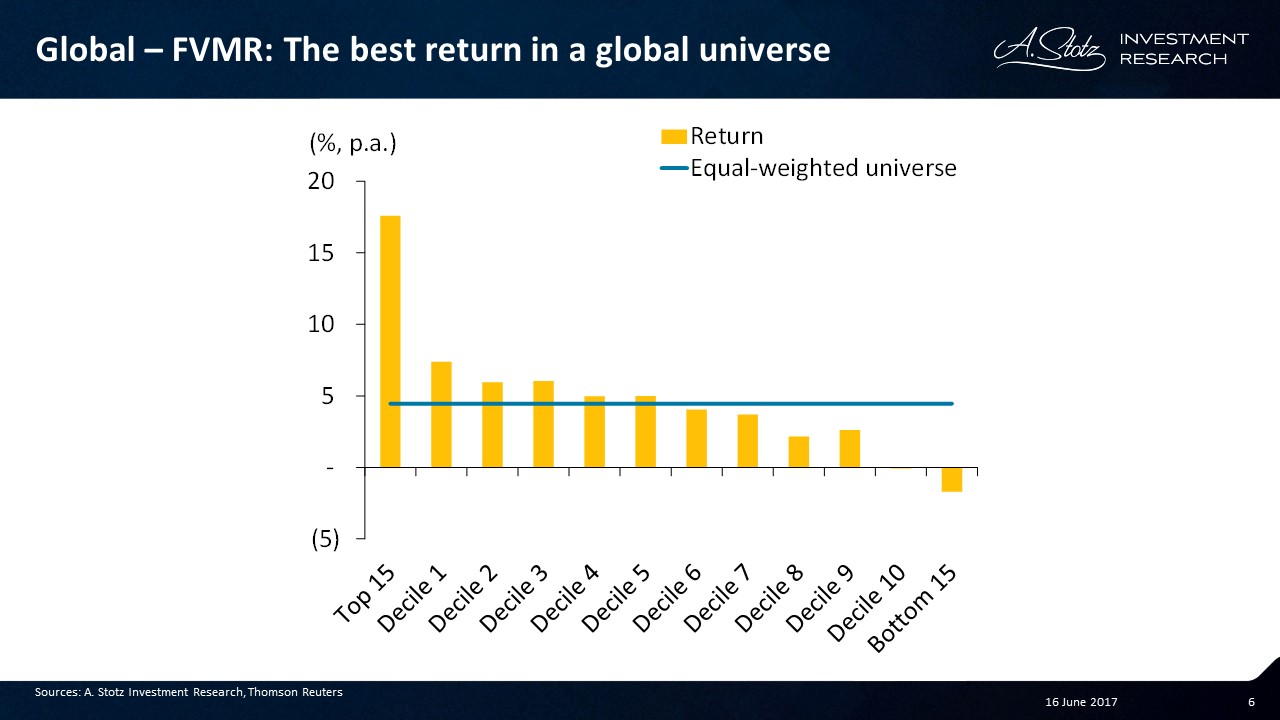 FVMR showed a clear relationship with return. Both the Top 15 and Decile 1 had the highest return of all factors and combinations that you’ve seen in our tests on this global universe.

Massive outperformance for the Top 15 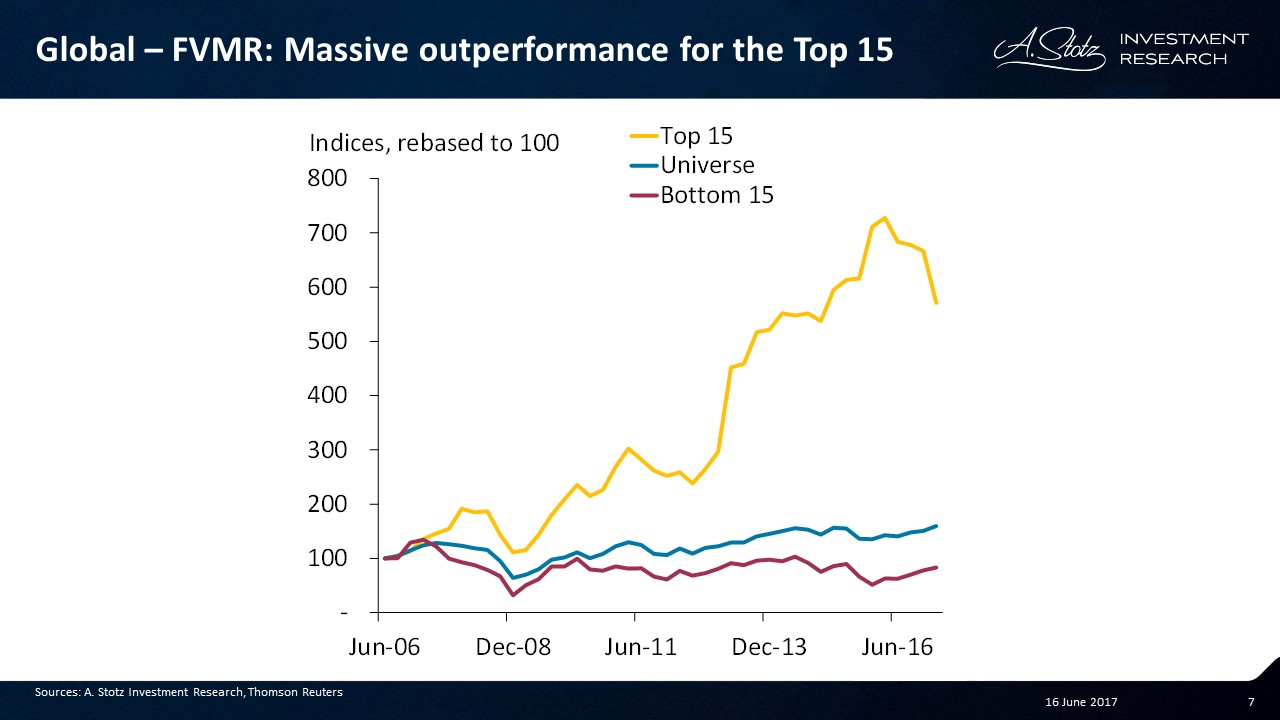 The Top 15 outperformed massively since inception. It has been hit in the most recent year though. The Bottom 15 has underperformed the universe continuously.

Question: Do you think a stop loss could protect against some of this downside? Let us know your thoughts in a comment below. 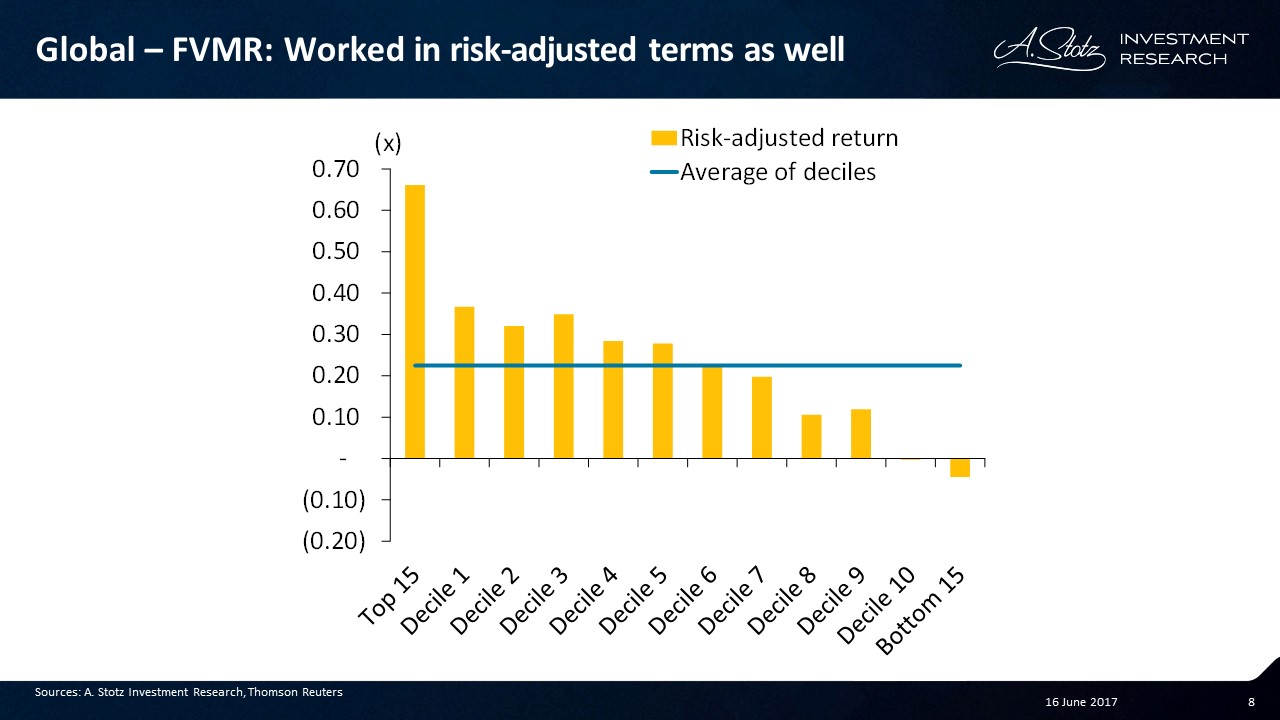 The FVMR combination was the most successful 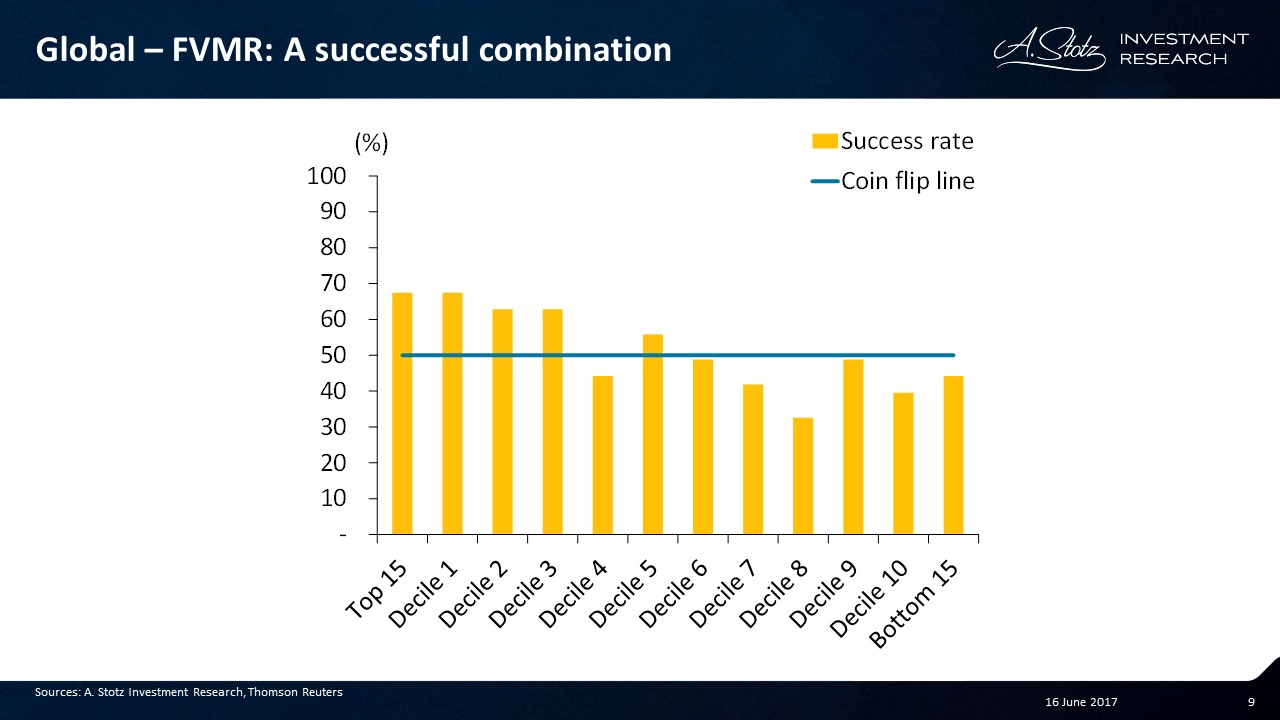 What you have learned

Risk-adjusted return showed a clear relationship between gearing and return, hence investing based on low gearing alone worked on a decile basis.

The combination of Fundamentals, Valuation, Momentum, and Risk into FVMR was the best strategy for a global universe. Both the Top 15 and Decile 1 had the highest return of all factors and combinations that you’ve seen in our tests on this global universe.