It’s that time of year again.

Countless high school students across the northern hemisphere are ceremoniously gliding their tassels from one side of their caps to the other and accepting a rolled-up piece of paper to commemorate the past four years of their lives.

Many of them will be thrust off to university in a few short months, where, at least in the Land of the Free, they’ll be loaded down with tens of thousands of dollars in student debt.

This strikes me as an incredibly cruel (and unnecessary) burden to place on a young person.

For whatever reason, modern society still highly values a university degree, even though they’re ubiquitous.

In 1940, only 4.5% of the US population had a Bachelor’s degree. It was truly something special. 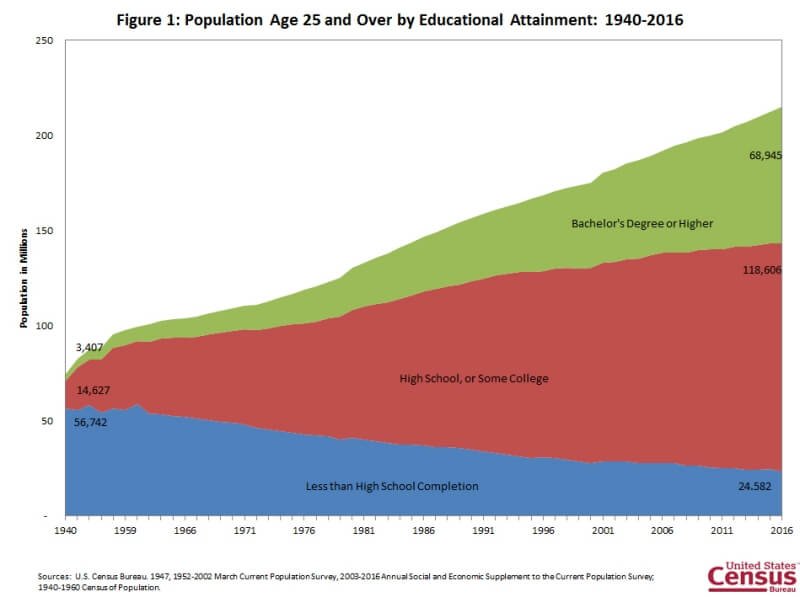 It’s not special anymore. Having a university degree is now average… no more of a professional differentiator than knowing how to type or use Microsoft Office.

(It wasn’t that long ago when those were actually special skills worthy of highlighting on a resume.)

So it seems crazy to go so deeply into debt simply to stay average.

I’ve written before that anyone who insists on obtaining a university degree ought to consider looking abroad. The benefits are innumerable.

First of all it’s a huge differentiator. If everyone else you’re competing with went to XYZ State University, and you studied in Switzerland, you’ll immediately stand out.

Second, the personal growth and development that come from living abroad is extraordinary, especially during a young person’s impressionable years.

At a minimum you’ll likely have a great chance to learn a foreign language and build a valuable global network, both of which are unique differentiators.

Then there’s the low cost, which is one of the biggest benefits of all.

It’s no wonder that the average student loan debt is approaching $40,000.

Including living costs and incidental expenses, four years can easily run over $100,000.

Candidly, most teenagers might not be sophisticated enough to make a $100,000 decision. So bringing the cost down is imperative.

There are plenty of countries overseas where you can study at a top-tier university for a fraction of the cost back home.

A few months ago my research team conducted a comprehensive analysis of universities worldwide and ranked dozens of jurisdictions based on price and quality.

For example, tuition is free in Venezuela, but you’re not exactly going to receive a globally competitive education (especially now that they can no longer afford toilet paper).

Meanwhile Hong Kong boasts a number of top-ranked universities, but the price is extremely affordable. That jurisdiction ranked #1 in our review for quality vs. price.

You see, one of the other great benefits about studying abroad is that it’s a great way to obtain foreign RESIDENCY, and perhaps even a second passport.

This is a major component in what I call a Plan B.

Foreign residency ensures that, no matter what happens (or doesn’t happen) in your home country, there will always be somewhere else where you and your family are welcome to live, study, work, invest, and do business.

Plus, most countries have rules that allow legal residents to apply for citizenship and a passport after a certain number of years.

This takes the benefits even further.

With a second passport, not only do you have another country (or multiple countries) to call home, but you’ll be able to travel the world with greater ease, do business in more places with fewer restrictions, and pass on all these great benefits to your children and grandchildren.

It all starts with residency. And in many countries, obtaining a student visa is a great way to get started.

Studying abroad in each of those countries I already mentioned, in fact, can lead to permanent residency and potentially even second citizenship…

… while at the same time you’ll receive a highly competitive, top-quality education without the mountain of student debt.

Oh, and for parents who have been diligently saving for your children’s education, you can even use your 529 college savings plan at some of these overseas institutions.

Think about it– the entire point of going to university is to prepare for the future.

What better way to do that than by knocking out one of the most important components in your Plan B?