Illinois is in a serious bind. The road to perdition has been well lit, and signposted. 8 downgrades in 8 years for the General Obligation (GO) liabilities of the state, with another drop down to junk likely as soon as July 1st, the beginning of their 2018 “fiscal” year. The unfunded pension liability of Illinois’ five state plans now exceeds US$130bln. IL State now has the lowest funded pension percentage (ranging from 37.5% to 44.2%) of all 50 states. All 5 plans have been achieving investment results well shy of their actuarial assumptions, the most prominent State Employees’ Retirement System of Illinois (SERS) by -1.75%, returning 5.5% versus a 7.25% bogey (reduced modestly in 2013).

Each Illinois taxpayer is on the hook for almost $50,000 in unfunded liabilities (pensions and post retirement health benefits). Illinois is the 5th most populated state in the union at 12,800,000, for reference. Same ranking for income (for now). Illinois has proposed a 20% privilege tax on investment management services (read; hedge funds) which was tabled in February 2017, approved by the House Revenue and Finance Committee in March and if enacted becomes effective July 1, 2017. The taxation of carried interest is highly topical at both the Federal and State level presently with both NY and NJ considering similar legislation (CT and FL are gladly accepting hedge fund refugees at the time of publication). 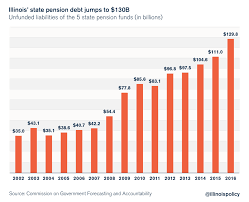 In addition to the pension woes, Illinois has not passed a balanced budget for 3 years in a row, as required under their constitution. This has resulted in the untenable situation whereby the state has accumulated $14.5bln in “accounts payable”, on which they will owe $800mm in interest and fees as of June 30, 2017. The cascade effect (i.e. it rolls down hill) has been very damaging. Chicago Public Schools (CPS) are owed nearly 1/2 billion from the state ($467mm to be exact) and must resort to “Grant Anticipation Notes” to bridge the funding gap created. CPS are hoping to keep the cost below 8% which is the usury cap in effect for some school budgets. Chicago accounts for a full 20% of K-12 (Kindergarten through grade 12) enrollment but a more modest 15% of the IL state budget. Laughably, the Chicago teachers are not covered by the state Teachers Retirement System. Chicago Teachers Pension Fund (CTPF) is also a basket case, as you might surmise and in addition to a number of other issues led Illinois’s largest city to be downgraded to junk status in May 2015.

Bond investors have taken note. Spreads on Illinois debt to MMD (Municipal Market Data, the yield curve of the highest rated, AAA/Aaa  municipal bonds, as published by Thompson Reuters) have widened. The eventual downgrade to junk, aka non-investment grade, will make IL debt ineligible for investment for some of their major institutional investors (one of which has already called for a boycott of Illinois debt) which are restricted by mandate to purchase only investment grade muni bonds. There are of course high yield muni funds, but they tend to be smaller in terms of AUM and have had some performance hiccups (Puerto Rico) which have curtailed investor inflows. Suffice it to say there will be more sellers than buyers on a downgrade to junk status for Illinois.

Municipal investors are a conservative bunch. Not a lot of crypo-currency investors in this lot. They are typically older investors in the highest Federal tax brackets (39.6% & 35%), let’s call them the 3%. An increasing portion of muni bond portfolios are Separately Managed Accounts (SMA’s), but the majority are still via mutual funds and closed end funds. ETF’s have made some inroads, but modest in market share terms. 10 year Illinois debt is yielding approximately 4.3% (Federal tax exempt, State tax exempt for IL taxpayers and not subject to 3.8% Obamacare investment tax). Converting this to a TEB (Taxable Equivalent Basis) a non-IL resident in the top tax bracket would need to invest in a corporate bond yielding 7.6% to match. Note: HYG the $20bln high yield ETF yields 5.13% in comparison, hence you might need to buy an out of favor sector like bricks and mortar retail, otherwise non-rated is likely where you will find >7% in the US domestic bond market. 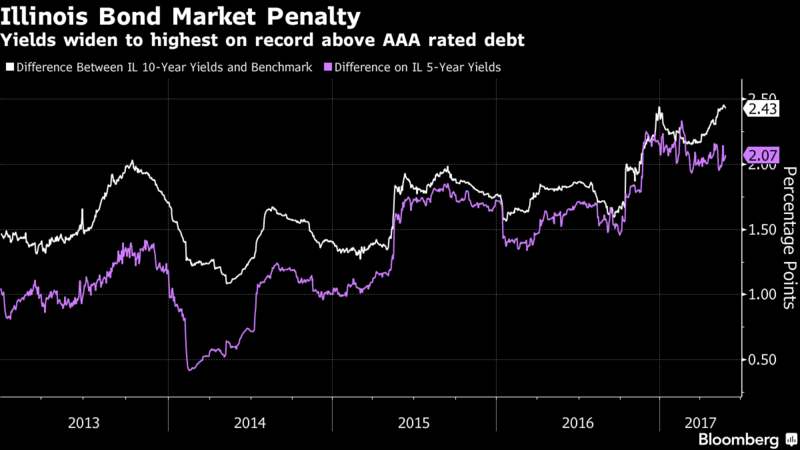 The same negatives that sent Puerto Rico (importantly not a State, technically a Protectorate https://ibankcoin.com/firehorsecaper/2016/04/10/puerto-rico-the-spoils-of-war/) on tilt recently are evident in Illinois as well, namely rampant crime and failing schools. Many schools are years behind in even tabulating scoring tests, which would be required to confirm their bottom quartile performance. To rival the record for shootings in Chi-town you have to go very far afield to places like Kabul.

Kentucky born Lincoln might hide the other half of his face if he were privy to the folly that has befallen “Land of Lincoln”.

Tread lightly, tread carefully. This is July business, post downgrade to junk for the GO credit. Remember, the highest yielding bond is often not the best “value”. Cross-over buyers that can not readily utilize the US Federal tax exemption (i.e.; foreigners, hedge funds) might look to the Build Illinois Sales Tax Revenue Bond which offers enhanced security (and ratings) from the dedicated sales tax pledge (This was also the thought with PR’s COFINA bonds which interest was recently suspended on by the courts, but you get the idea). The PO’s (Pension Obligation) bonds of Illinois are also taxable and will likely swoon a bit on a GO downgrade to junk status. Those looking to structured deals can vet Illinois tobacco settlement bond “Railsplitter” which was structurally superior on issue in 2012 as it could withstand smoking cessation rates of 4% wrt debt service (over $55bln of tobacco bonds have been issued across all 50 states).