Sometimes — in fact, I’d say most of the time — it pays to ignore the common wisdom on Wall Street. Even when Wall Street, the media and technical analysts are screaming at you to do one thing, it doesn’t mean they’re right.

Just look at Amazon, which celebrated the 20th anniversary of its initial public offering this past Monday.

Amazon had a tough journey on its ascent to become the fourth-largest market capitalization in the S&P 500. As is the case with most stocks, it wasn’t a straight climb to the top.

In fact, shares fell 15% across three trading days about 107 times. Not to mention it suffered from 20% pullbacks or greater in 16 of the stock’s 20-year life.

During the pit of the 2008 crisis, it plummeted 64%. And unsurprisingly, it took a massive hit when the tech bubble popped — losing 95%.

That’s enough volatility to spook any investor into dumping their shares in one fell swoop and never looking back again as they dart out the exit.

Clearly, you won’t find many traders who can say they knew Amazon was destined for greatness during its rather sharp declines. Even Warren Buffett said he “underestimated the brilliance” of Amazon CEO Jeff Bezos.

However, there are those who didn’t follow the common crowd wisdom. And that’s what I want to highlight for you today: When you’ve done your research — when you know without a doubt that your trading thesis is correct — don’t let Wall Street scare you out of your stake.

For example, tech expert Paul Mampilly prefers to track his own systems instead of following Wall Street’s lead. When talking heads doubted the success of Amazon — and other tech giants — he kept saying the outlook was optimistic because the fundamentals were still sound. Most of all, his indicators told him the stocks still had plenty of momentum.

He said as much on Fox Business, and shortly after, Amazon climbed 332%. 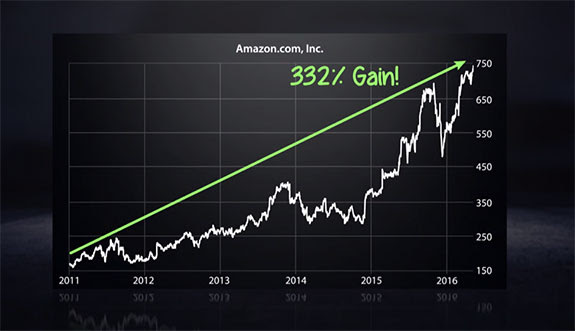 In Paul’s case, he was following his True Momentum system — which meant the shares were headed for a rally no matter what anyone else thought. You can read more about that system by clicking here.

For the rest of us, this simply marks a good lesson. Just because everyone is headed for the exit, it doesn’t necessarily mean you should be doing the same.

Instead, make sure to recheck your strategy. Triple-check it, even. Follow an analyst or a system you trust — and if, at the end of the day, you believe you’re still sitting on a profitable investment … well, don’t let Wall Street scare you out of your position. Just look at what happened with Amazon.

Catch you next week.